By Danielle Naer
1.17.2021
Stefanie Keenan/Getty Images for A Sense of Home 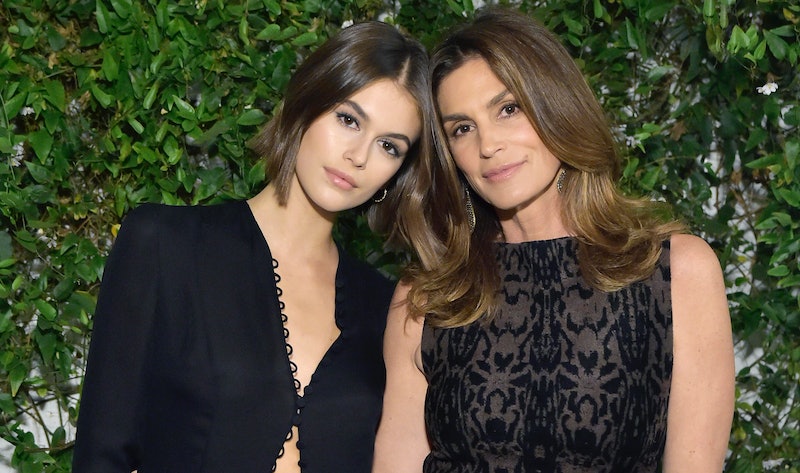 The '80s and '90s will forever be remembered as the "supermodel era" — a time when ladies such as Christie Brinkley, Iman, Cindy Crawford, Linda Evangelista, Kate Moss, and Naomi Campbell became household names around the world. Since those days, many of the famous faces from this model set have graduated from the runways to start businesses, and families, of their own. Now, decades later, ladies such as Crawford and Moss have passed the modeling torch to their daughters, many of whom may, eventually, be even more famous than their mothers.

In this game of model names and faces, obvious young players come to mind such as Kaia Gerber, Georgia May Jagger, Lila Grace Moss-Hack, Sailor Lee Brinkley-Cook, and, of course, Gigi and Bella Hadid. They all boast impressive resumes and are the crème de la crème of inheriting amazing gene pools. Take sisters Bella and Gigi, who, according to Vogue Hong Kong, in 2019 were the second and fourth, respectively, highest-paid models in the world. Gerber, who is only 19 years old is steadily climbing the ranks in the industry, too, frequently appearing on runways and ad campaigns for fashion houses such as Chanel, Coach, and Marc Jacobs. To the delight of many fans, some mother-daughter model duos have even walked the runways, together.

Ahead, 8 young models who take after their supermodel moms and are making waves in the industry.

Moss, who was scouted at just 14 years old while she was at an airport, helped usher in an era that turned runway models into megawatt It girls. She landed her first cover at 16 for The Face, became an iconic figure during the Calvin Klein era, and was known to be a party girl in the '90s, which added to her fame.

In addition, when she walked the Chanel Spring/Summer 1994 runway in a pink pantsuit set and matching pink hair, she made her mark as the cool, edgy model who created the trends, not followed them. Now, Moss' 18-year-old daughter is following in her footsteps and poised to create trends of her own for the Gen Z generation. In 2020, Lila Grace starred in the Perfect Marc Jacobs fragrance campaign and made her runway debut at Miu Miu's Spring/Summer 2021 presentation. Here, she opened and closed the show — seizing two of the most important catwalk roles.

Say the name Cindy to her fans and many will conjure up memories of the model's unforgettable 1992 Pepsi Superbowl commercial, which she then recreated in 2018. In one fell swoop, this ad cemented a cool-girl uniform that would stick around for generations to come: denim shorts and a white tank. Aside from Crawford's role in this pop culture moment, the model has graced over 1,000 magazine covers in her decades-long career and has walked in runways for every fashion house imaginable. Post modeling, Crawford became an entrepreneur, launching both beauty and home brands.

Crawford's 19-year-old daughter Kaia needs little introduction. She made her runway debut for Calvin Klein in 2017, four days after she turned 16 and since then has modeled for the likes of Miu Miu, Chanel, and Marc Jacobs. She has appeared on the cover of Vogue and its various editions numerous times — most notably in a solo role in 2018 for Vogue Paris. And in the very important age of social media, Kaia is ahead of her supermodel mother in Instagram followers by roughly 1 million (Kaia has 6 million Insta fans). When it comes to the young model's personal style, she often opts for blazers and dad sneakers, which put a gender-neutral spin on casual chic.

Before she became a beloved cast member on The Real Housewives of Beverly Hills, Yolanda Hadid was a successful editorial and runway model through the '80s and '90s, with credits ranging from Vogue Australia to Grazia magazine. She has written a book titled Believe Me: My Battle with the Invisible Disability of Lyme Disease, released in 2017, and has created a modeling show called Making a Model with Yolanda Hadid.

Her daughters Gigi and Bella's own model accolades have far surpassed their mother's. Collectively, the Hadid sisters are regular runway fixtures during Fashion Month, dominate the fashion billboards in New York City, and have landed countless endorsement deals in the fashion, beauty, and fitness categories. (Gigi's a well-known face for Reebok while Bella is one of Nike's It girls.) In Feb. 2020, the Hadids proved modeling is a family affair at Off-White's Fall/Winter 2020 show when the trio showed off their best catwalk struts together.

Christie Brinkley is known for her innumerable Sports Illustrated swimsuit shoots, appearing on its annual swimsuit cover for three consecutive years from 1979 to 1981. She has graced the covers of household magazines such as Glamour, Harper’s Bazaar, and Cosmopolitan, which further cemented her star quality to millions of readers. Brinkley has been credited with representing a generation of celebrity models who didn't have to walk in couture shows to be dubbed a supermodel. The multi-hyphenate has also dabbled in film and television shows, appearing in National Lampoon's Vacation and Parks and Recreation.

Brinkley's 22-year-old daughter, Sailor Brinkley-Cook, is her mother's twin when it comes to looks and both ladies embody star status in front of the cameras. Brinkley-Cook, who started modeling at 15, is signed with IMG Models, the same agency who reps the Hadid sisters and Georgia May Jagger. Brinkley-Cook most notably appeared in the 2017 Sports Illustrated Swimsuit Issue with her mother and sister Alexa Ray Joel. (She was then SI's rookie in 2018). The model's fashion credits include a runway debut for Dolce & Gabbana in the spring 2018 season, plus a runway walk with her mother for Elie Tahari's Fall/Winter 2019 presentation.

Pat Cleveland broke glass ceilings as one of the first African-American models to permeate the print and runway spaces during the '60s and '70s. Her career started in 1966 when she was first noticed by an editor at Vogue — the publication said she was an emerging designer —and then she subsequently landed an opportunity to work as a model for Ebony. She followed the modeling path and achieved star-studded success at the 1973 Battle of Versailles Fashion Show, where she was one of the 36 models to walk the runway event. (Five French designers competed against five American designers in this showdown that made fashion history.) Cleveland's other fashion creds include modeling for Valentino, Oscar de la Renta, Yves Saint Laurent, and Christian Dior. She has also worked with artistic geniuses from Irving Penn and Richard Avedon to Andy Warhol.

Cleveland's fame paved the way for her daughter Anna to later join the modeling world. According to Vogue, Anna, who is now 31 years old, walked in Moschino's runway show when she was only 5 years old and later, at 13, walked in a Karl Lagerfeld show alongside her mother. However, Anna really made her mark in the modeling industry at the Giles Spring/Summer 2015 show, where she showed off her catwalk prowess to models Cara Delevingne and Yasmin Le Bon. Since then, Anna's graced various editorials for glossies such as Elle and Dazed — with one of her most memorable shoots at the hands of Peter Lindbergh for Interview Magazine.

Jerry Hall began her modeling career at the age of 16, when she left Texas to go to Paris. Hall landed various gigs from being the face of Yves Saint Laurent Opium perfume to Revlon cosmetics. Along the way, the model became known for her relationships, too, with Bryan Ferry of Roxy Music (she modeled for the band's 1975 cover album Siren), Rolling Stone's Mick Jagger and then later, media mogul Rupert Murdock. Hall has been a muse for Chanel, starring in its 2009 accessories campaign. She has also dabbled in acting, appearing in Popetown (2006) and Forgotten Man (2017).

Of Hall's four children, Georgia May Jagger and sister Elizabeth Jagger became models like their mom. However, Georgia May, now 29 years old, might have the most name recognition by fashion fans. She walked in Chanel's Resort Show in 2011, which she closed, and has walked for other fashion houses such as Balmain, Miu Miu, Versace, Fendi, Tom Ford, and more. The model is also known for the gap between her two front teeth, which she has come to embrace over time. Like other mother and daughter model duos, Georgia May and Hall have appeared in ads together — they posed together for H&M's 2011 campaign, then in 2013 for a feature with T Magazine.

French pop singer Vanessa Paradis became internationally famous at the age of 14 with her song Joe le taxi (released in 1987). She has had a long career as a singer, releasing seven studio albums and having worked with the likes of Lenny Kravitz. The singer officially became a Chanel muse when she starred in a 1991 perfume ad, shot by visual artist Jean-Paul Goude, that featured the star on a trapeze inside a cage. She then went on to star in numerous Chanel campaigns, touching all the brand's categories from beauty to handbags.

Naturally, when her lookalike daughter Lily-Rose Depp (her father is Johnny Depp) was old enough to model, Depp followed in her mother's footsteps and became a Chanel muse herself. She was chosen at just 15 years old by Karl Lagerfeld himself to become its ambassador. Aside from working with Chanel, the now 21-year-old star is making a name for herself in the film industry. She was nominated for two César Awards for Most Promising Actress — for her performances in The Dancer (2016) and A Faithful Man (2018), respectively. At the 4th Los Angeles Film Awards, she won a Best Actress award for her role in My Last Lullaby (2019).

Heidi Klum is best known for being one of the Victoria's Secret Angels, alongside models like Gisele Bündchen and Tyra Banks. In addition to being part of the VS family, Klum has appeared in Sports Illustrated, Cosmopolitan, Glamour, Esquire, and more. Meanwhile, her runway credits include walking for the likes of Zac Posen, Vera Wang, and Escada. Klum became recognized for her television appearances, too, with her signature "auf Wiedersehen" line in Project Runway. (She served as the host for the show for 16 seasons, leaving in 2018.)

Though Klum has now redirected her career from modeling to being a businesswoman — she has partnered with New Balance and Amazon.com to launch a clothing line — she did make a recent cover appearance on Vogue Germany with her daughter, and aspiring model, Leni Klum. This cover was Leni's debut into the modeling world at just 16 years old. She is one of the youngest, and newest faces, to the industry so keep your eyes on her as she continues to soar.