Kerby Jean-Raymond has a message. 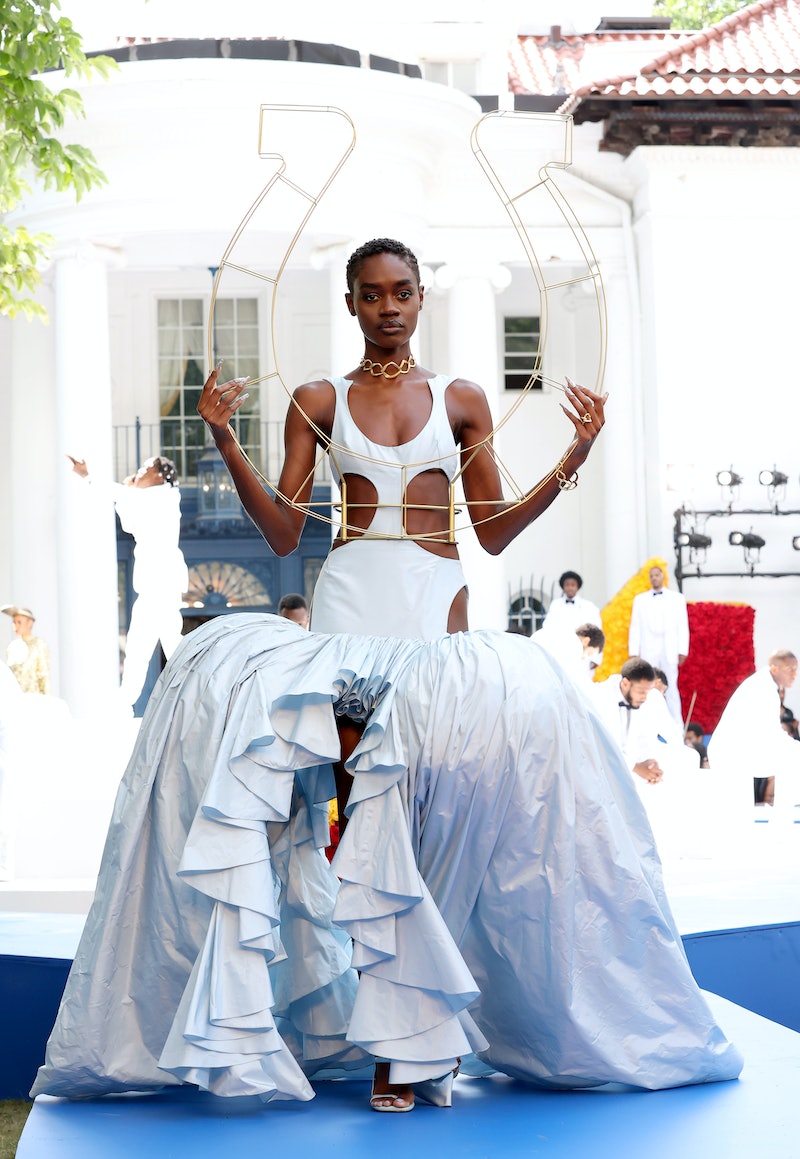 Haute Couture week was extended an extra day this season to allow for Kerby Jean-Raymond and his label Pyer Moss to pull together an impressive feat of production: to completely remake a fashion show in 48 hours. Jean-Raymond, the first Black designer to show officially on the couture schedule, had originally planned for the first Pyer Moss Haute Couture show to happen on Thursday, but guests arrived to find themselves met with the one factor no designer can control — the weather. Faced with an afternoon of Hurricane-induced rain and lightning, the show was postponed instead for Saturday.

“For now, We gonna go party and dance in the rain,” Jean-Raymond shared on Instagram. “Thank ya’ll for loving on my team and me in the way you do.” When the day arrived, sunny and warm no less, Jean-Raymond presented a collection (titled “WAT U IZ”) that was about much more than clothes. Villa Lewaro, the home of America’s first female self-made millionaire Madame C.J. Walker, was the backdrop for a collection that highlighted the creative talents of Black Americans throughout history, each look correlating to an invention.

Many of the ensembles were somewhere between clothing and sculpture — from a giant jar of peanut butter to a suit inspired by the typewriter. On Thursday, Jean-Raymond shared with the audience that the idea for the collection was dreamed up while on the psychedelic drug ayahuasca. “With couture, there’s no limits,” he told WWD. “With ready-to-wear, we think about what is going to sell and look nice on the red carpet and all these other factors that water down the vision. With this we were able to create a cool new expression of ourselves.” Jean-Raymond did not have access to the typical Parisian ateliers associated with Haute Couture but instead worked with artisans stateside to bring his dreams to life.

While couture is often considered to be a formal and often serious arm of the fashion industry, thanks in part to the required level of artistry and the high price tag, Jean-Raymond acknowledged that his creations, while serious in topic (to combat the erasure of Black culture, he told Vogue), were meant to be playful and a bit camp. Jean-Raymond opened his show with a speech by the former chairwoman of the Black Panther Party Elaine Brown, and a performance by 22Gz. Then, models walked to a live orchestral group as dancers moved in the background. The choices build off of Jean-Raymond’s past collections for which he has chosen distinctive locations for New York’s Black community (Brooklyn’s King’s Theatre and Weeksville) and highlighted the music and artistry of Black creatives. The clothes matter, but it’s the ability to share his success and his culture with an ever-expanding audience that made the show one to watch.

See it in full below, along with a few favorite looks.