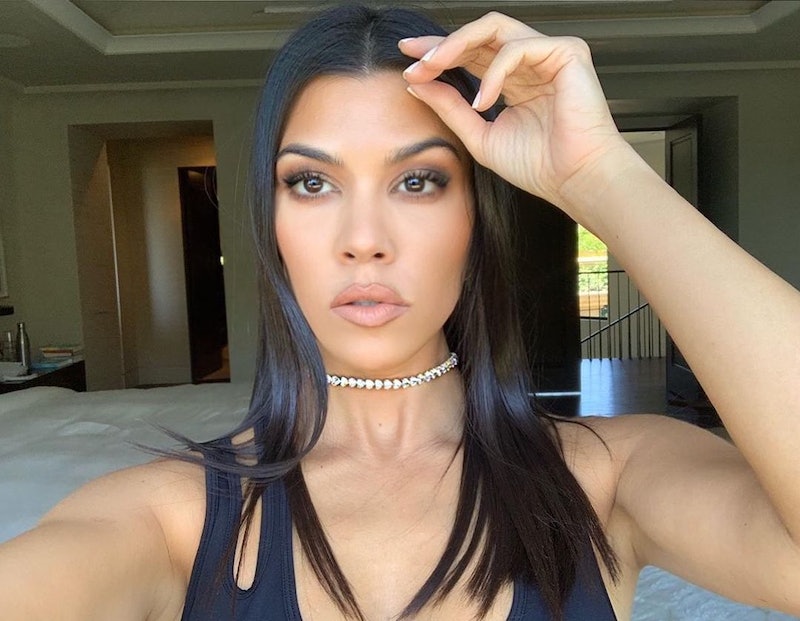 Kourtney Kardashian, despite being one of six siblings, isn’t exactly what you’d call a wallflower. From the earliest episodes of Keeping Up With The Kardashians (rest in peace), the eldest sister never once shied away from the spotlight, the drama, or the chance to show off some seriously killer looks. Now that she commands a platform of more than 126 million Instagram followers, we don’t need TV to see Kourtney Kardashian's best manicures, outfits, makeup, or hair. The past year in particular has been a huge one for the star, using some downtime (and her hot new romance with Travis Barker) as the perfect excuse to experiment with all kinds of fun nail sets.

We’ve gathered Kourtney Kardashian’s greatest manicure moments to serve as inspiration for your own. Whether you’re after something subtly playful like one of her colorful French manicures or going all out in an animal print masterpiece, there’s a Kourtney Kardashian-approved manicure for every style out there.

Kourtney practically lit the internet on fire when she debuted this set of sleek, matte nails featuring a nude base and leopard French tips. Designed and created by Lisa Kon, a go-to manicurist for all the Kardashian-Jenners, they’re a stunning take on the French manicure revival while still managing to look subtle. Well, as subtle as leopard print can be.

The Kardashians (and the Jenners for that matter) always understand the importance of some good vacation nails, the perfect accessory for lounging poolside. Popping against her warm tan and colorful, geometric bathing suit, Kourtney chose this electric blue manicure for her trip to Costa Rica.

Who says a manicure needs six colors and a funky pattern to be iconic? Judging by the comments and likes on these super-minimalist, ultra-fine black tips, they’re actually one of Kourtney Kardashian’s most popular nail sets to date. They’re the work of Kim Truong, a top-rated celebrity manicurist who frequently works with Dua Lipa, Kerry Washington, and of course, Kourtney’s sisters.

Sure, this photo op could be to show off her incredible cherry-printed nails, complete with red tips and one very glossy top coat. But the manicure’s proximity to Travis Barker’s new “Kourtney” tattoo — and the fact that the cherries are shaped like teeny-tiny hearts — tells the real story.

Kourtney clearly knows that a bright green (be it slime, lime, or spring green) is one of the hottest color choices for nails right now, as exhibited by this earth goddess mani. Perfectly paired with this leaf as her prop, the green nails are an ideal pop of color.

Spend more than a few minutes scrolling through Kourtney Kardashian’s Instagram feed, and you’ll glean a few things from her nails alone: she loves red (must be her inner Aries), she loves her boyfriend, and she loves to send subtle but very clear messages through her manicures. In a close-up shot liked by nearly four million people, Kardashian chose these heart-shaped French tips for her official relationship announcement. With no accompanying caption, she lets her romantic, Valentine’s Day nails do all the talking.

Assuming Kourtney Kardashian is a Method actor, she didn’t technically pick (or even wear) this manicure — Ariana Grande did. As part of her pitch-perfect Halloween costume as the “Positions” singer, Kardashian made sure nothing about her baby pink outfit, high-pony wig, and Ariana-approved makeup was inaccurate. That applies to her candy-pink nails, which look like an exact match to the shade Grande’s worn on several occasions.

Described as her Disney manicure, this two-tone set by Lisa Kon for a day at the park with the kids is perfectly Kourtney Kardashian: dressed-up and special but not too on-the-nose theme-wise. An impressively thin half-moon curve outlines the very tips of Kardashians in a striking metallic red, while the pale pink base adds the illusion of even more length and keeps the whole thing casual. Kon even put together a kit of polished used for easy at-home recreation.