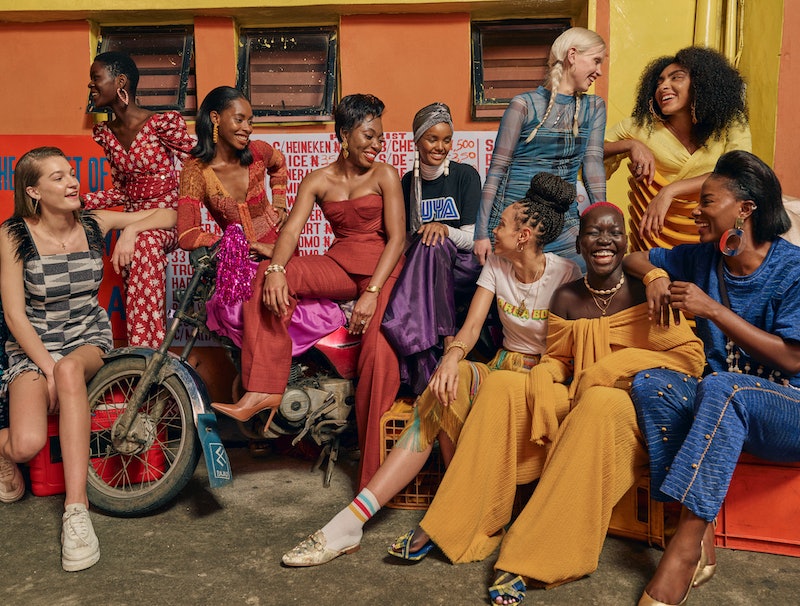 Sharon Chuter is tired of the industry's favorite buzzword: inclusivity. “Brands just think, ‘If I make a foundation range, I’m being inclusive,’” she tells The Zoe Report. “But it goes beyond that.” Which is precisely what prompted the 32-year-old former beauty executive (who's held positions at Revlon, L’Oreal, and LVMH) to quit her job, step out on her own, and create UOMA Beauty, an “Afropolitan” cosmetics company. With UOMA, Chuter aims to “rewrite the rules of inclusivity,” as she says — starting with a swipe of highly-pigmented lipstick and ending with full-spectrum storytelling.

UOMA’s first rewritten rule of inclusivity? Foundation is not enough. “Let’s talk about women with two-toned lips, let’s talk about women with really dark lips,” she says, pointing to the fact that many brands now boast 40+ shades of base… but few offer a single lip product that pops against all 40 of those shades. Some of her other frustrations include highlighters made with talcum powder that leave dark complexions ashy, and pigment-poor eyeshadows that require women of color to prep their lids with a lighter shade of concealer in order to get a tiny bit of color payoff. “These are things that brands don’t care about,” Chuter states matter-of-factly. Until UOMA came along, that is.

Color could be considered the newly-launched brand’s calling card. In addition to 51 shades of foundation and concealer — you know, the basics — UOMA has made it its mission to create bright, bold shades of shadow, lipstick, and lip gloss that flatter the entire spectrum of skin tones. Its three Black Magic Color Palettes (inspired by mythical African goddesses) feature next-level shadows of all shades, from sunset gold to eggplant purple; while its line of lip products — including Black Magic Metallic Lipstick, Badass Icon Matte Lipstick, and Boss Gloss — just might be the most pigmented the market has ever seen.

New rule number two? Heritage deserves to be celebrated. “Think of fashion — having a heritage is a bonus,” the Nigerian founder explains. “That’s really what creates brand DNA. Dolce & Gabbana is a proud Italian brand, but everyone around the world appreciates the heritage. Burberry is a British brand, yet everybody appreciates it.” That inherent celebration of heritage has been missing from the beauty space, she says, and UOMA wants to do something about it. Everything from the color choices to the packaging to the brand language is designed with what Chuter calls “Afropolitan inspiration” in mind. “But this is beyond Afro,” she tells TZR. “This is for everybody to learn something new and enjoy this new, colorful heritage.”

Which brings her to UOMA’s third new rule: Diversity shouldn’t be “niche.” “Before Fenty, some brands were embarrassed [to advertise they had 40 shades of foundation], because they didn’t want to be labeled an ‘ethic brand,’” Chuter says. UOMA doesn’t necessarily want to be labeled an “ethnic brand,” either — but for all the right reasons. To be blunt: Despite its African influence, UOMA isn’t just for Black women. Asian women, Latinx women, Indian women, white women, all women (and men!) are invited to join the UOMA’s “beautiful tribe.” Not that you’ll ever catch UOMA staging a strategically “diverse” photoshoot to illustrate that point.

“Brands love to say, ‘Hey look at our picture, we are inclusive, high five!’ To me, that’s not true inclusivity,” Chuter tells TZR. “Inclusivity is about understanding the rainbow that is the world.” To this end, the founder places a lot of importance on storytelling. “You talk about shade 60 — but who is that person?” she asks. “How can I celebrate them, how can I understand them? When I allow you to be who you are, and I understand who you are, I can cater to you.”

Chuter understands UOMA’s customers because she’s lived their stories herself, as a self-described misfit and someone who didn’t fit the mold of what beauty has traditionally looked like. “If you’re a different color, you’re called a minority; if you’re a different sexual orientation, you’re called a minority,” the founder says. “But put us all together, and we are the majority.” And that, perhaps, is UOMA’s ultimate guiding principle for true inclusivity: eliminating the idea of a “minority” and empowering all.

Even without the refreshing brand ethos behind them, though, UOMA’s products could speak for themselves. “I love the foundation,” Chuter says. “Right now I’m wearing the shade Brown Sugar — I’ve been out in sun a lot and enjoying my melanin.” For shadow, the founder can’t get enough of the fiery reds in the Black Magic Savage Palette, which she accentuates with a flick of the Afro.Dis.Iac Cleopatra Ink eyeliner saying, “I’m an eyeliner girl — it’s my staple.” Her personal favorite product is the Badass Icon Matte Lipstick. “I’ve got Sade for when I want to pop it out,” she says of the classic red shade. “If I’m going for a nude lip, I would go with Tracy.”

While Chuter herself enjoys a bold statement or two, there’s something in the UOMA range for makeup minimalists and maximalists alike — it’s all about creating whatever look makes you feel good. “In the past, there’s been a standard of what everybody needs to look like to be considered beautiful, and that completely is against what I stand for,” Chuter says. “Beauty is everybody’s birthright.”

Made in a whopping 51 shades, this foundation is completely weightless, delivering a blurred finish.

This article was originally published on 4.25.2019