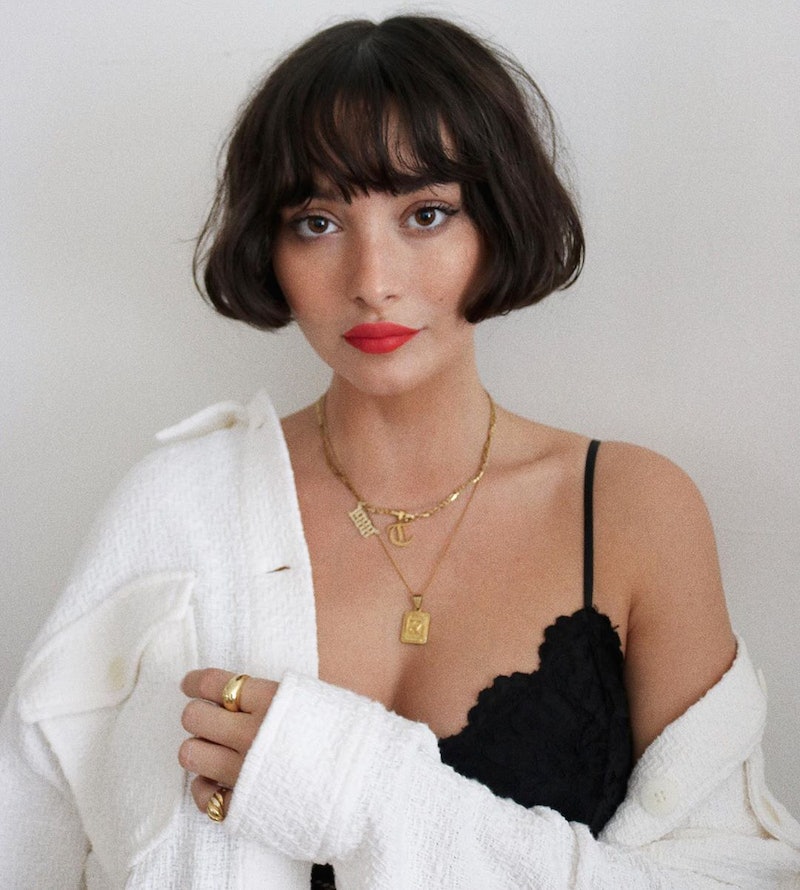 Asking the girl in front of you in line at the bodega what salon she goes to is a right of passage for New Yorkers. The Big Apple is the fashion hub of the country, and its beauty industry is equally inspiring. And as some of the top hair dressers in the country are found here, the New York City haircut trends for fall are worth bookmarking, even if you aren't a resident.

Angela Soto, founder of Baja Studio in Soho, uses fierce to describe the NYC haircut trends across the board. "I truly think the NYC spirit can't be taken down," the hairstylist says. "While fashion feels trivial during these times, we can't forget it's a form of art and expressionism." Whether you're a native or moved to the city later on in life, Soto says individuality is at the forefront of why you're here. "That spirit does not leave you. Walking around this city is, and will always be, one of the most fascinating places in the world."

Just like fashion trends are cyclical, hairstyles resurface decades later, too. "The '90s are fully back," Jessica Gillin, a hairstylist at Jenna Perry Hair in the East Village, says. "It’s wild seeing 13-year-olds dress and style themselves exactly how we did at 13 in 1995!" She's seeing the return of cute baby clips and scrunchies circa the '90s. "Also long shaggy '70s cuts with long fringes are big if you’re keeping your hair longer like Taylor Swift."

The uncertainty of the future is influencing some to choose their hair style wisely. "It has made people want haircuts that will grow out nicely because we don’t know if salons will shut down again anytime soon," Erickson Arrunategui, a hairstylist at Bumble and bumble, says. "So I think people want haircuts that will grow into new fun shapes, like a layered bang can grow seamlessly into a layered haircut if you can’t get to the salon in six to eight weeks for your next trim."

And as many aren't styling their hair as often during the pandemic, Neil Grupp, a hairstylist at Suite Caroline Salon in Soho, is seeing less heat applied to the hair and, in turn, more natural, healthier locks. "In the fall, you can be more aggressive with weight removal because in New York you don’t have to deal with humidity and possibly the hair becoming to big," he adds.

Grab your phone and book an appointment at one of these top New York City Salons, stat. And upon arrival, consider asking for one of the six trending haircuts below. You'll be the one getting asked where you got your hair done — guaranteed.

The number one haircut trend Soto is seeing is — drumroll, please — the modern shag. "It's all about a heavy 'Bardot bang,' or a full fringe falling into lots of shaggy face-framing layers," she says. "The reason I say modern is because it's all about the face frame." And because it's not a mullet, she says there aren't short layers in the back. To nail the chic look, Soto says keeping the perimeter thick and full, not thinned out, is key.

Out of the haircut trends for fall that Anthony Hernandez, a hairdresser at Rob Peetoom Williamsburg, is seeing, shaggy layered styles rank number one for most unexpected. "Many people haven’t been styling their hair much due to quarantine," the hairstylist says. "This has given them the opportunity to embrace their natural texture more. Because of that, people want something a little less polished and a little more lived in."

Gillin says bobs — specifically short '90s straight and big curly triangular bobs — are huge right now in New York. "Think Dua Lipa, Kaia Gerber, Sophia Amoruso," she says. Soto is in agreement that bobs are all the craze. "They never go out of style, but right now we are seeing a lot of above collar bone, just below the chin [styles]," the hairstylist explains. "A bit more on the blunt of full side with texture." While Soto says the super short to the lip line "French girl bob" was sought-after last year, this season the look is longer.

And Sally Hershberger, a celebrity hairstylist who is responsible for Miley Cyrus' hair transformations and owner of Sally Hershberger Salon, says she's been giving clients a very blunt bob. "I use these clippers that makes it so precise," she says. The result: the perfect haircut that swings like a broom.

Leona Wilson, owner of Leona Wilson Salon, says for women with natural hair, she believes buzz cuts are going to trend for fall. "A lot of people are going really buzzed, everyone is trying to keep it low-maintenance," she notes.

"One of the trends I’m seeing is people wanting more movement in their hair, so more layers or fringe," Arrunategui says. "Something that will look good air-dried or styled, but will also grow out nice since we don’t know if salons will get shut down again."

Give yourself a round of applause if you've resisted the urge to give yourself bangs during quarantine. But if the look has been on your mind, make an appointment with an expert. Anthony Dickey, founder of Hair Rules, is seeing many women with curly hair (specifically type 3 and 4 textures) trying out bangs. "Bangs on curly hair is kind of daring," Dickey says. "They tend to grow out really well because they disappear nicely as they grow out."

Edward Tricomi, co-founder and celebrity stylist of Warren Tricomi Salon, says because of COVID-19, a lot of people are discovering longer hair. "Long hair trends are really popular right now," he says. Hershberger is in agreement, and says longer hair is easier to manage, especially in times like these. "People are coming to the salon now but it's not like how it used to be," she explains. She thinks especially right now in the summer every wants something easier and not as layered.