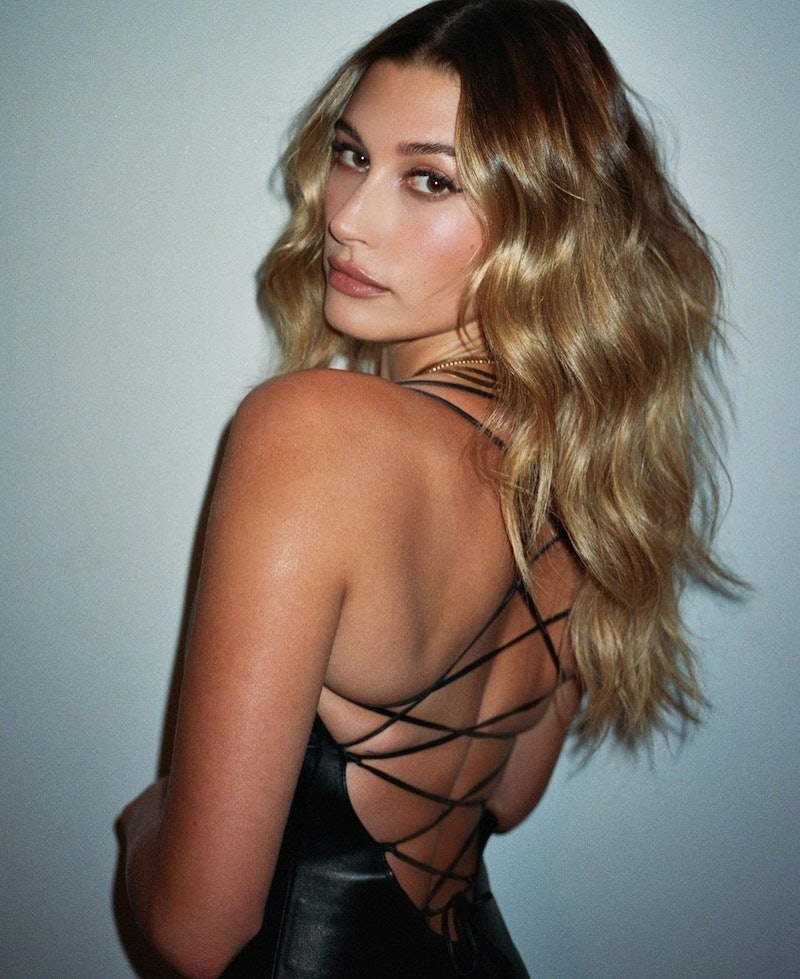 Eyeshadow, like politics and pizza toppings, can be rather controversial. There are those who think it’s best left for late nights and professionals, sure they’d look like a rogue showgirl, disco ball, or raccoon if worn in daylight. Then there are those who never leave home without a cut crease, three-shadow look (plus one for the lashline, naturally), and couldn’t imagine being caught dead in anything less than a full face. Hailey Bieber, model and minimalist makeup extraordinaire, wants to show you the perfect meet-in-the-middle solution. In two short videos uploaded to her Instagram grid, Hailey Bieber wears shimmery eyeshadow that catches the light as she moves her around but otherwise fades against the fresh backdrop of her complexion — the best of both worlds.

It’s as much makeup as we’ve seen Bieber in all summer, as she’s preferred to opt for a bronzed and bare face on vacations while adding just a hint more drama for parties and social functions. This wash of nude, gold-toned shimmer is a continuation of that natural glam, framed only by what looks like either a light coat of mascara or a very gentle lash lift. The effect is literally eye-opening, adding dimension and length to Bieber’s brown eyes.

Bieber hasn’t only been into a relaxed makeup look, either. She’s been spotted in a sleek, claw-clipped bun several times over the summer, looking casual and fresh while remaining firmly on-trend.

To recreate this shimmery minimalist eye look for your next engagement, the most important thing to nail is actually the rest of the face. Bieber’s shadow stands out without sticking out because it’s in alignment with the rest of her no-makeup makeup, including brushed-up brows, a light dusting of bone structure-enhancing bronzer, and a barely-there lip. With your face in place, it’s time for the shadow, which is surprisingly easy to apply. Because you’re working with just one color, you don’t have to worry about precision and dimension the way you would if you had to make all the shades blend.

In fact, when dealing with shimmery shadows, it’s actually easier to just dip your finger into the pan and gently rub it across your lid peaking just above the crease — the natural oils in and texture of your finger will provide excellent grip and pigment payoff. For a cream shadow, same principle: Use your ring finger to smear it on but be sure to throw the shadow stick in your bag for touchups if there’s a possibility of getting wet or sweaty.

Summer is clearly Hailey Bieber’s season, and her non-stop beauty looks — and the endless inspiration it provides — are scorching hot.

With a warmer color palette, this Fenty Beauty set gives you nudes for blending and a dramatic ink shade for that daring line.

"The Laura Mercier Parisian Nudes Eyeshadow Palette is another staple in my kit because of the perfect balance of neutral nude shades in matte, metallic, and shimmer textures," Puckey notes.

Buying someone else makeup can feel a bit nerve-racking — but this luxe blend of everyday neutrals and nudes will fit right into any makeup fan's collection.