More male-identifying people are exploring beauty than ever before, but where did it all start? 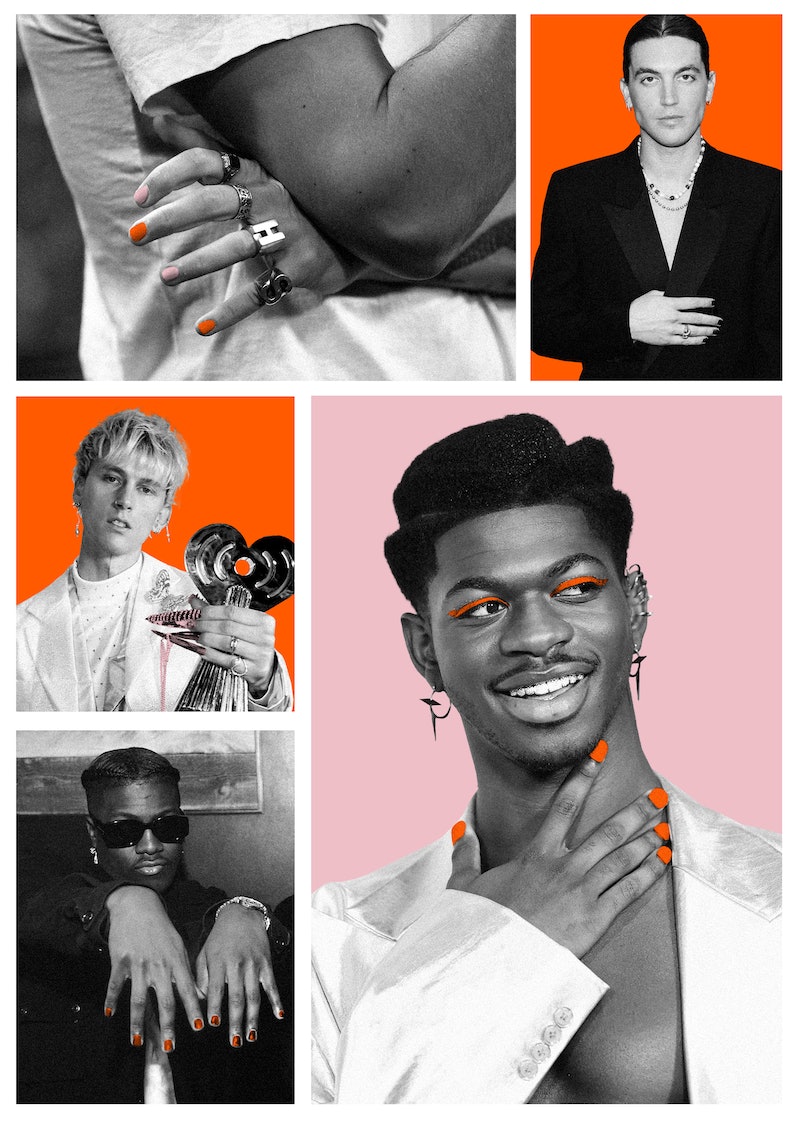 As the conversation about gender fluidity and gender expression continues to grow and evolve, we are seeing more and more male-identifying people engage with beauty in ways they rarely have before. While icons like David Bowie, Prince, the men of KISS, and Green Day’s Billie Joe Armstrong can all be cited as a reference point for men using makeup, 2021 sees many male-identifying and gender expansive celebrities bringing aspects of beauty (nails, hair, makeup and the like) into their overall looks more often, and more creatively, than ever before.

It’s easy to assume that men wearing nail polish is an emerging trend, but that’s only because nail polish, along with the rest of the beauty aisle, has been so heavily gendered as female in recent history. Celebrity nail artist Jenny Longworth, who created Harry Styles’ headline-making manicures, explains that, although Harry and men like him are putting men in nails (back) on the map, the male community as a whole has worn polish for centuries.

As she says, “We have evidence of men adorning their nails as far back as 3200 BC in Babylonia, when men would stain their nails with kohl and henna. Different colors were indicators of social status: black nails were symbolic of those of a higher class; green nails were worn by the common man.”

The social implications of nails appeared throughout various other cultures and eras as well. The Ancient Chinese used nails as a signifier of class, rank, and dynasty, and it’s often been said that Cleopatra would use henna to tint her nails and the ends of her fingers bright red.

In more recent history, Longworth recalls numerous, significant nail moments that stand out in her mind. “Dennis Rodman’s petrol blue metallic polish at the [1996] MTV Music Awards,” she says of her favorites. “His confidence and level of expression through fashion is something I admire very much.”

Fast forward to today, when people like Lil Nas X, Tommy Dorfman, and Bad Bunny are all using nail polish as ways to experiment with their looks — often landing on numerous best dressed lists while sporting their preferred manicure.

Like many recent beauty trends, the beginning of men wearing nail polish can be, at least partly, credited to the ‘80s punk scene. People of all genders wore black nail polish to identify themselves as part of the scene, without caring about the cleanliness or the condition of the lacquer itself, which is why chipped nail polish (mainly black) is often considered punk rock in the beauty, fashion, and music industries. Then in the ‘90s, punk evolved to form a new type of genre — grunge — with musicians like the late Kurt Cobain sporting a variety of polish shades on their fingernails. And as the aesthetics of the era started to influence fashion, so too did the visibility of men wearing nail polish.

With the arrival of the 2000s came the emergence of emo music and “scene” kids, and it was, again, male rock stars who inspired many young men.

Hayden Manders, a copywriter in the lifestyle and beauty space, saw men in many of his favorite bands wearing nail polish and decided to follow suit. “I idolized Gerard Way from My Chemical Romance, The Used's Bert McCracken, and a bunch of the emo/pop-punk bands under the Fueled by Ramen label. They all famously toyed with nail polish — in addition to makeup and presentation in general. Remember ‘guyliner? Thank god that's a phrase we don't use anymore.”

Today, men in music are still the ones most often seen with manicured nails. Paul Klein from the band LANY has been snapped wearing nail polish consistently for the last few years. “I started painting my nails sometime in the summer of 2018,” Klein explains. “I’m not really sure why — I just thought it looked kinda cool. I was doing them myself, and I’m right handed, so, for a while, I was only painting the nails on my left hand. At the moment, I feel naked without polish so I try to keep them painted around the clock.”

The influx of men like Klein wearing manicures signals that other male celebrities likely don’t feel the need to adopt an overtly glam rock persona, à la Bowie or Gerard Way, in order to paint their nails. To the casual onlooker, seeing Klein feels much more like an everyday look rather than part of a costume — the shock value isn’t as strong (if present at all) — which can do a lot to normalize nail polish for men who aren’t famous.

Whenever there’s a growing beauty trend — men wearing nail polish very much included — there is inevitably a celebrity trying to cash in on it soon to follow. Predictably, we’re seeing a few male celebrities use their star power to front new polish brands that are marketed “for men.” Case in point, Lil Yachty just launched a nail polish collection, and Machine Gun Kelly has also recently announced he has a nail collection in development. If this is any indication, we'll most likely see more men entering the beauty and nail color space this year, and correspondingly an influx of men exploring their own relationship to polish.

It goes without saying that the reason men wearing nail polish gets any attention is because nail polish is traditionally considered as “for women.” When a male-identifying person chooses to play in a space typically deemed female, whether he likes it or not, the connotation is usually queerness. But as polish on men becomes more commonplace, is there an effort to separate polish from queerness? Is that possible? And does it matter?

Seemingly simple beauty rituals like nail polish often offer someone the space to explore their queerness. Manders thoughtfully reveals, “I absolutely do believe my affinity for nail polish is intertwined with my queerness... Does wearing polish make me feel queerer? No, not necessarily but I do feel like it completes my queerness. It's an inherent part of my self-expression, an outward extension of my personality.

“I'm queer and I don't hide it. My hands do queer things: they animate when I talk, pose in photos, hold hands with other men, flick around on the dance floor, apply my makeup in the morning, and wash my face at night. Having polish on them, to me, is the icing on the cake of my constant quest for self-actualization.”

Longworth, who has done the nails of countless celebrities of all genders, speaks to the power of celebrity when pushing the boundaries of gender in culture. “I believe high-profile men who wear nail polish serve not only to break down gender and beauty constructs, but also remind men they’re free to express themselves through fashion and nails — however they wish.”

The simple act of a male celebrity, or even a male-identifying person on the street, wearing nail polish can do a lot to move the needle and change culture for the better. As Longworth says, when it comes to nails, there are no rules.

Still, there is a reliable, time-tested standby, especially for any men who are contemplating dipping a toe — or rather a fingernail — into the world of nail polish. Just take it from a rock star like Paul:

“Black is the go-to color.”