Their mission is to dismantle toxic beauty norms. 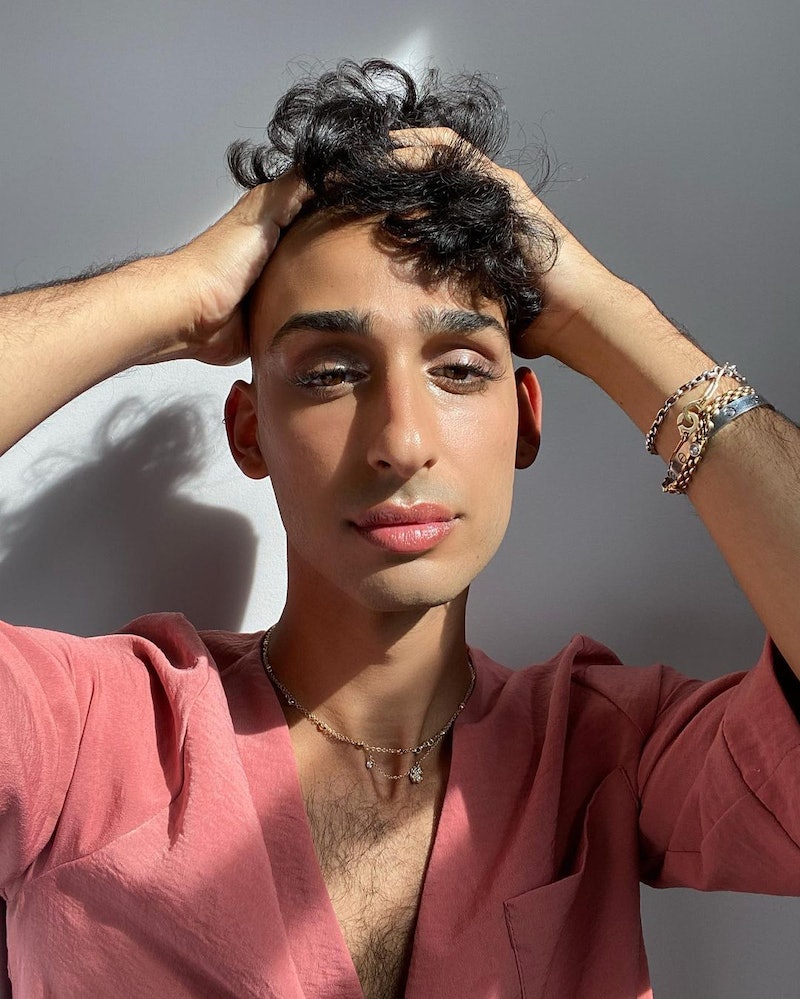 It was the eyebrows that did it. Multimedia beauty creator Cyrus Veyssi (pronounced sea-roos) was in their bathroom, age 13, plucking their eyebrows into a razor-thin arch, when their mom walked in and had a massive freak out. Veyssi had come out by this point, but their mom didn’t know they were starting to experiment with beauty and question their gender identity.

It wasn’t that part, however, that bothered Mama Veyssi. “She freaked out not because I was plucking my eyebrows, but because thick, bushy eyebrows are a marker of our Persian culture and beauty, and it was a signature trait passed down from my grandfather.”

Veyssi, now 27, has since embraced the plush family brow as their own beauty signature — flirty little tufts of hair anchor the inner corners, while the arches unfurl gracefully towards the temple. But apart from saving them from a lifetime of regret over an overly plucked 90’s brow, this incident also became a turning point for Veyssi. “It was a profound moment for me even though I knew my mom was supportive. She validated my femininity by not chastising me for affirming my gender, but also acknowledged my intersectionality by reminding me that there’s beauty in our Persian roots.”

That early affirmation has propelled Veyssi to let go of rigid gender norms. Over the years, they begun to slowly dismantle Westernized concepts and norms around beauty that their Brown body had internalized their whole life. Veyssi, a first-generation Persian- (or Iranian-) American who identifies as non-binary and queer, stopped defuzzing their facial and body hair, embraced their skin tone instead of lightening it with foundation, and chose to embrace, instead of straightening, the curls that are often a marker of Persian identity.

Body hair — and its inextricable link to gender — is something Veyssi discusses often on their Instagram and other social platforms, which they maintain in addition to their day job at a New York-based marketing and communications agency. “I [grew up] seeing images of [white and gendered] femininity, and trans people being represented as hyperfeminine, so I tried to fit in with the white Instagays by posting buff body pictures, thinking if I look like them a little bit more, I’ll get noticed.”

It took a while for them to come to the realization that they could be feminine and still be comfortable with their facial and body hair. “I [now] know those things are complete social constructs and have nothing to do with embracing femininity,” they say.

That’s why, as a queer, Brown creator, Veyssi feels it’s vitally important to start conversations around intersectionality. “We need to deconstruct the way we’ve been colonially brainwashed into identifying hair with gender and body parts with gender. There was no advocacy for it, so I didn’t know, and I didn’t see people like me. It was an important turning point [for me to learn] that gender could be inclusive of everything.”

Veyssi grew up in Boston to parents who were supportive when they came out at age 10. Their experience was in contrast to many others with similar cultural heritage, as Brown communities of the diaspora still largely hold traditional and rigid views on sexuality and gender. Even for Veyssi, the reaction they anticipated from their extended Persian community had been a constant worry.

“When I was younger, I genuinely thought that there was no way I could come out as queer, non-binary, and still firmly and defiantly identify as Persian,” they say. “I genuinely was willing to sacrifice one of those things in order to succeed and get ahead.” It was heart wrenching not to be able to connect with their culture because “it’s being gate kept by my palatability to [community members].”

They started on their journey by being “loud and hard spoken,” but has softened their tone as time went on. “Instead of hiding everything about myself so I could connect with my culture, I’m now visibly open about my gender and sexuality, but a different form of palatability, now, is how I communicate.” They found that if they adopted a gentler tone, they were able to have conversations with Persian men in their life whom they admired, but lost connection with ever since they came out, and were even able to slowly change their perspectives.

Veyssi’s mission is to do the same via social media, while empowering other LGBTQIA+ and Middle Eastern people, who are often marginalized and invalidated within their own cultures. “I felt stuck between cultures and communities and realized that if I didn’t make the space it wouldn’t be there.” After they launched Chai Chats, a monthly series on their IGTV, in which they invite a creator to talk beauty and socio-cultural issues, they had several older Persian people reach out to say they had listened and understood much more than they thought possible. “We need more dialogue. The biggest thing I [can] do with my platform is [encourage] folx to take up space. When you’re stuck, and feel the space isn’t there for you, make the space.”

Over the last few years Veyssi has starred in social media campaigns for brands like Glossier, Live Tinted and Peace Out Skincare, among others, and continues to share a love for beauty with their mom. Lately, the theme of their beauty experiments has been trying to bring back features and traits they tried for years to subdue to fit in with Western beauty ideals. Veyssi is on a mission to care for their curls after years of straightening, while their mom’s trying to get back to bushy brows. “She did laser to shape them and now she regrets it and wishes they were bushier and more reflective of Persian beauty. So we just fill them in!”

Despite their passion for beauty, Veyssi has been vocal about how the beauty and wellness industries sometimes invalidate people like them, and wants to navigate beauty on their own terms. For instance, they’re pushing back against the pressure the expectation to always present in a full face of makeup. “We should be able to wear or not wear makeup [however] and [whenever] we want and still feel validated as the gender(s) we identify with. Non-binary and gender fluid doesn’t have to look a certain way.” For Veyssi, extracting the best of all the dueling cultures they identify with and create an identity that’s fiercely their own is the way to true self-acceptance.

"I’m obsessed with this incredible hair mask. It’s founded by two sisters of Indian descent, and they use nutrient-rich Ayurvedic plants to nourish all types of hair. I usually leave it in for 20-30 minutes, let it nourish and hydrate my scalp, then wash it off in the shower. "

"This [summer collection of products] is a super-colorful, exciting homage to the ‘90’s and the best part is that it's all weatherproof, so I can sweat all day and still look fabulous. "

“I use this whenever I want a light, glowy look for the beach or a pool.”

"This beauty brand amplifies, supports, and uplifts queer/trans communities. Their glosses are fire!"

"SPF SPF SPF! It’s so important for protecting skin, no matter your skin tone, texture, or color. This is one of my go-tos from Innisfree."