How some of the most popular movements in fashion started with Black tastemakers and trendsetters. 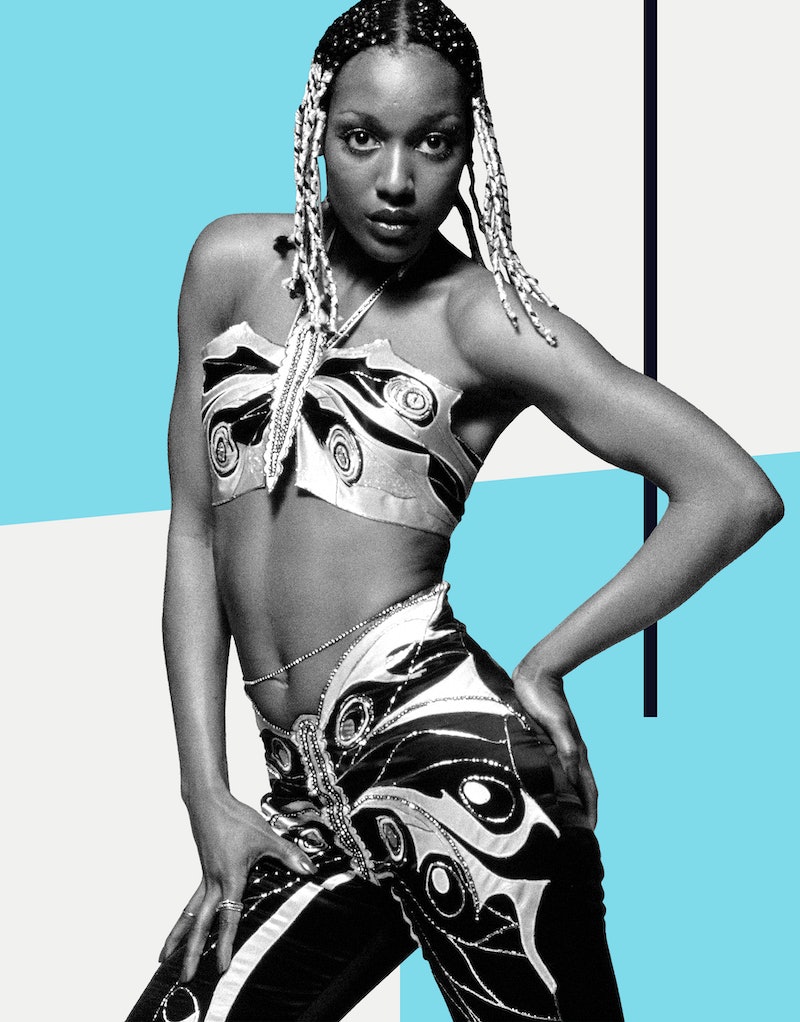 Beyond streetwear, past sneakerheads, and to the left of mainstream representation, there exists a treasure trove of Black fashion tastemakers and trendsetters who, throughout history, have been steadily shaping the way everyone dresses — oftentimes without credit or acknowledgment. Whether it was a famous rocker who took fashion risks or an independent designer behind a legend, Black artists and culture have been at the heart of some of fashion’s most popular trends.

2020 was a turbulent year, but from it, the industry has been forced to take a hard look at what representation means — addressing structural racism, amplifying Black voices, and supporting Black designers and brand owners. Though the work is far from done, it cannot proceed without acknowledging a history that is often overlooked — even just a handful of the many names whose legacy in fashion is marked with a footnote rather than a headline. As Black History Month continues, and Fashion Week begins, it’s time to take a look back at a few uncredited figures responsible for influencing the course of universal style.

Mega brands and A-list celebrities have long built their aesthetic on the backs of Black style. Kardashians and creative directors alike used Black culture as the gold standard for cool. So, it’s worth examining how and why the history of Black style and the Black contribution to the fashion industry has been largely glossed over. Ahead, take a closer look at a few familiar faces and lesser-known names whose presence is still felt on the runway today.

There is no denying the impact that legendary musician and bonafide fashion icon, David Bowie, had on the world of style. Following his otherworldly, glam rock looks of the Ziggy Stardust era, Bowie adopted a slick, moody persona known as the "Thin White Duke" as part of his "Station to Station" tour. Bowie’s pared-down shift in style was the result of his collaboration with fashion designer Ola Hudson.

Hudson, a popular costume designer throughout the '70s, created many of Bowie’s on-stage and on-camera looks including the iconic, black, high-waisted, wide-legged, vested suit that he wore in the 1976 film The Man Who Fell To Earth and his Isolar tour. Her business-meets-pleasure play on proportions inspired by '40s glam and '70s sex appeal came to define the same androgynous fashion with a point of view that still lingers in the collections of Hedi Slimane for Saint Laurent, Raf Simons, and Dries Van Noten.

Hudson, herself a trained dancer, was never a household name — but her avant-garde aesthetic that mixed restrained tailoring and aggressive silhouettes for life on and off stage are instantly recognizable. The Los Angeles-based trendsetter was well-entrenched in the world of music and art having owned her own boutique named Skitzo on the Sunset strip. Legends like Diana Ross, Ringo Starr, John Lennon, and The Pointer Sisters all turned to her to craft wearable looks with cerebral, high-fashion drama. Oh, and she just so happened to also be the mother of one of rock ‘n roll’s most famous names — Slash of Guns ‘N Roses.

Disco queens and dance fiends are well aware of the name Amii Stewart, but the Black musician, dancer, and style icon isn’t given her due when it comes to fashion. Chances are you’ve bopped to her chart-topping cover of Eddie Floyd’s 1966 Stax classic “Knock on Wood” or her moody rendition of “Light My Fire.” But, Stewart’s aesthetic should be all too familiar — because it was the major uncredited influence behind another dance music legend ... Cher.

“Cher stole some of my stuff — I came first and she came after,” Stewart stated in a 2017 interview with V Magazine. Her dramatic headpieces and flamboyant, barely-there looks mixed theatrics with high fashion that was tailor-made for the dancer's body.

Stewart worked with a designer named Miranda on her fantastical, custom ensembles: “Everyone would ask who did my costumes, and I wasn’t giving that name up for anything in the world!” she explained. “The phones were buzzing, wanting to know where I [got] my clothes,” Amii confessed in a 1979 People magazine interview, “She’s a German designer, but I can’t tell which one, because if I did there’d be 55 Amii Stewart clones.”

The Cher connection wasn’t lost on some, the article went on to refer to her head-turning looks with hefty amounts of under boob as “costumes that make Cher’s wardrobe look subdued.” Though Cher’s ab-baring, Bob Mackie creations graced the red carpet throughout the ‘70s, there was a noticeable shift in her style after Amii’s ascent. Fashion historian Shelby Ivey Christie said it best in a 2020 tweet, “I stan Cher. I mean, stan but also these are the facts.”

Today, notes of Amii’s futuristic glamour can be seen in New York-based brand Area’s glittering bralettes, rhinestone-trimmed hoods, and their uniquely loud take on couture. Peter Dundas for Roberto Cavalli, Stella McCartney back in her days at the helm of Chloe, and virtually every pop princess from Cardi B to Lady Gaga have inherited Stewart's campy magic.

Logomania, or the conspicuous obsession with all things covered in luxury logos, has been part of mainstream fashion for decades. Though most think of head-to-toe logos or heavily branded accessories as an industry standard, it was, in fact, a trend started by hip hop culture that played off of heritage iconography. But no one did this better than entrepreneur Daniel Day, otherwise known as Dapper Dan. The Harlem-based designer dressed some of hip hop’s most prominent stars from LL Cool J to Salt-N-Pepa in his oversized looks covered in reworked or silkscreen designer logos. Think custom car interiors splashed with Gucci’s interlocking Gs or a one-of-a-kind, knee-length parka in Louis Vuitton’s iconic monogram.

These weren’t bootleg knockoffs of a brand’s designs ... no, they were “knock-ups,” as he called them, or one-off, custom creations that made elusive brands more exclusive and covetable to the Black market, who had been largely ignored by high-fashion labels. Dan’s deep knowledge of tailoring, unorthodox use of prints on fur and leather made his creations stand out in a sea of streetwear.

For Dapper Dan, his enterprise was about more than just a look — it was about access and the power fashion has to go “across social and economic lines,” as he stated in his memoir Made in Harlem. A common misconception is that Dap’s designs were easily affordable or made for the masses. In its heyday, Dapper Dan’s 125th street boutique (which was open close to 24 hours a day) catered to the “bosses and kingpins and hustlers,” as he put it, who made the industry take note of Black luxury consumers.

Dap’s effect on heritage fashion was felt long after his doors were shuttered in the '90s thanks to a raid by future Supreme Court Justice Sonia Sotomayor. His hustle and vision were responsible for the mid-'90s boom in brand insignia and after Gucci presented a version of his iconic coat for Resort 2018, Dap got a seat at the table as a formal collaborator with the Italian house.

Speaking of Gucci ... when Alessandro Michele took the creative reins at Gucci in 2015, he set in motion a sartorial juggernaut with a quirky, bookish aesthetic and gender-fluid approach. In the years since, the new Gucci look has grown more and more delightfully outlandish with exaggerated pussy-bow blouses, embellished eyewear, glitter, and lots of clashing patterns. Michele mined the archives of '70s-era glam rock icons like Elton John — who, like Cher, turned to legendary costume designer Bob Mackie for his glittering ‘fits. But the contributions of flamboyant Black artists who blurred gender lines and challenged traditional taste (well before Elton hit the stage) are often forgotten in the long list of visual references.

Little Richard’s most spectacular ensembles hit the auction block in 2020 after his death, and the world got another glimpse at his rule-breaking style. A hot pink, fringe-trimmed, brocade combo from the '60s crafted by his longtime collaborator, Detroit-based designer Melvin James, could fit seamlessly with Gucci’s Spring 2019 collection. He was a fearless “dandy” with a penchant for calculated, dramatic flair — from his flashy colors to his makeup. “I wore the makeup,” he once said in an interview, “so that white men wouldn’t think I was after the white girls. It made things easier for me, plus it was colorful.”

James and Little Richard dreamt up rhinestone-encrusted caftans, patterned mock-neck blouses, and suits trimmed in animal print with pops of pink that set the stage for Michele’s more-is-more maximalism. He made male vanity — with all its flash and fabulousness — as mainstream as it could be in 1955 when he sang “Tutti Frutti” until his death in 2020. “I am the innovator! I am the originator! I am the emancipator! I am the architect!” he famously exclaimed. And for that, we must all tip our feather-adorned hat.