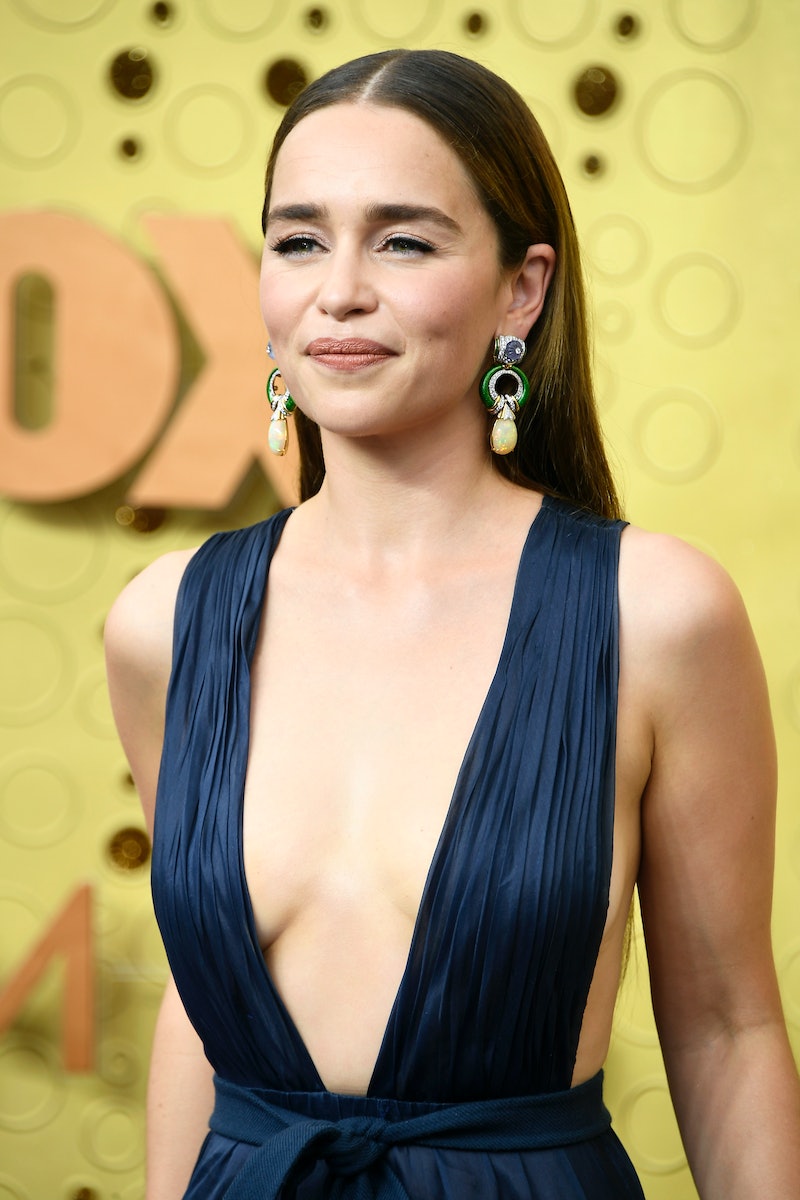 While the Game of Thrones finale may have been extraordinarily polarizing, one thing fans can likely agree on is the fact that the Queen of Dragons' real life style is pretty darn flawless. And that includes Emilia Clarke's dress at the 2019 Emmy Awards. But although, at this point, it's expected that the actor will be stunning on any red carpet she graces, what did come as a surprise was how different the gown she chose looked than when it was first seen on the runway.

According to an Instagram post the star shared en route to the show, it was actually Jennifer Lopez who inspired her overall Emmys look. This might come as a surprise upon seeing the original iteration of Clarke's plunging navy dress, which made its first appearance in Valentino's Paris Haute Couture show for Fall/Winter 2019.

On the runway, the gown was featured with a matching jacket and ornate headpiece, which at first glance feels like a far cry from what the Best Lead Actress nominee wore to the awards show. That said, one of Clarke's strengths is making even edgy looks — including haircuts — seem totally doable. So for the Emmys, she stripped the dress of those aforementioned accessories and instead added subtle drama with a stunning pair of David Webb earrings. She also transformed the couture version by adding soft, natural makeup and hair.

But even without some of the more high-fashion details that were shown on the runway, Clarke was still a showstopper. Her choice of a classic color stood out in a sea baby blue and sherbet-hued gowns. And that wasn't the first time the actor took something timeless and made it feel brand new again. Earlier this year, she made the houndstooth blazer a totally covetable wardrobe essential when used to add a pop of pattern to an all-black ensemble. In fact, adding in some menswear-inspired pieces is one of her signature style moves.

Though her run as Khaleesi may be over, Clarke's role as a fashion trendsetter seems to be just getting started. Based on what she's shown thus far, she's definitely one to keep your eye on in terms of what's next for hair, makeup, and fashion — both on the carpet and on the street. And as her head-turning, head-to-toe Emmys look proves, the actor serves as major inspiration when it comes to making haute couture work for real life.