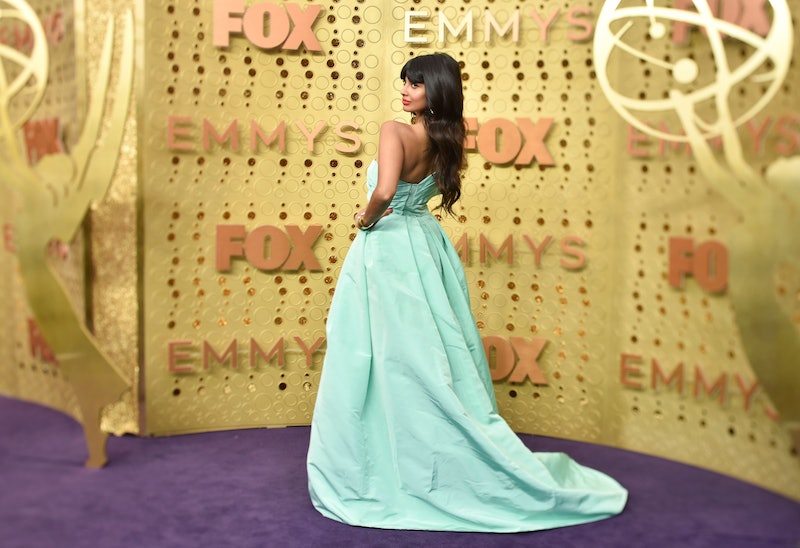 Arguably the most exciting part of awards season, the red carpet is a great opportunity to see some of your favorite looks from the runway come to life. And much like with the collections that make their way down the catwalk, you're bound to identify a trend or two in the process. Kicking off the season with the 2019 Emmy Awards, here are all the red carpet trends that you should know from the evening.

Early on, it was quite apparent that powder blue was the color of the night and more than one of your favorite celebs got the memo on two-tone dresses (which was embraced by the likes of Mandy Moore, who was nominated for Outstanding Lead Actress in a Drama Series, for her role in This Is Us). Not to mention, it seems that the Spring/Summer 2020 runways have predicted the evenings penchant for pastel ensembles and sherbet hues — as the sorbet looks were plentiful. But as the red carpet progressed it's safe to say that there were in all actuality a handful of trends that served as a common thread for tonight's awards show.

One of the most popular trends of the night, sorbet-colored gowns came in an array of pastel hues in shades that varied. Jameela Jamil, stunned in a mint one-shoulder gown by Monique Lhuillier, while Killing Eve's, two-time nominee, Sandra Oh opted for a warmer color palette in a body-hugging Zac Posen sweetheart design. On the lighter end of the spectrum, fan favorite, Sophie Turner unsurprisingly sported Louis Vuitton, with high-shine details that compliment the satin finish quite nicely.

Two-tone ensembles are what happens when choosing just one color to wear on the red carpet becomes nearly impossible. The Emmys presented quite a few different takes on this trend but the one most represented was the once controversial, red and pink combination —Marissa Tomei and Mandy Moore both had the right idea, opting for shades that were closely related. While Taraji P. Henson decided on a stark contrast for her custom Vera Wang gown. Switching gears almost completely, Viola Davis wore a black and white look that's timeless by design.

While at first glance head-to-toe sparkles can seem more appropriate for prom than an awards show, many took a calculated risk to take sequins head on and the result is quite chic. Julia Louis Dreyfus strut down the red carpet in a beautiful gold gown with a subtle ombré effect, by none other than Oscar de la Renta. Nominated for her work in the Netflix original series, When They See Us, Niecy Nash put a '20s-inspired spin on the trend — topping it off with a fitted head piece.

One of the biggest trends both on and off the red carpet, puffed sleeves appear to be here to stay and tonight's looks confirmed it. The Emmys saw quite a few drop-shoulder silhouettes — like This Is Us star, Susan Kelechi Watson's striking Badgley Mischka gown, and Dascha Polanco's Barbie-esque Christian Siriano look. However, leave it to Gwyneth Paltrow to put her own spin on a trend — her minimal Valentino gown was subtlety detailed with ruffled sleeve trimmings that fell to the floor for an unexpected twist.

This article was originally published on 9.22.2019