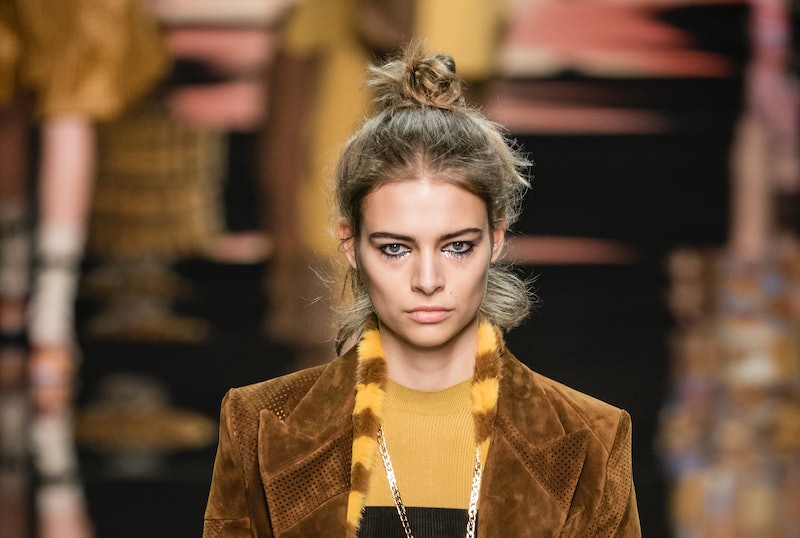 Picture the "classic Italian woman." Perhaps Sophia Loren, with her winged liner and curled coiffure, comes to mind. Or maybe you think of Isabella Rossellini, and her perfectly-in-place pixie. That woman — the one who takes a certain kind of pride in her appearance, the one for whom grooming is a way of life — still exists. But looking at the Milan Fashion Week Spring/Summer 2020 hair trends, it’s clear that a new kind of Italian woman has emerged: One who’s too busy running the world to think about her hair. One who believes that less is more (maybe because she doesn’t have time for “more”). One who doesn’t give a — well, you know.

The hairstyle that dominated the runways of Milan is something I’ll call “Woke Up Like This Waves.” Bottega Veneta, Alberta Ferretti, Emporio Armani, Etro, and Blumarine all showed variations of the same: loose, middle-parted, effortless strands. (At least, they look effortless.) Fendi took laissez faire hair to the next level, via models sporting messy ponytails and sloppy topknots. The famed fashion house even accentuated the rolled-out-of-bed look with glittery “dark circles” under the eyes, begging the question… Has burnout become a beauty trend? But fear not: Classic Italian sophistication is still alive and well, as seen at Prada (where the sleek side part took center stage) and Moschino (center-parted chignons as far as the eye can see).

The biggest hair trend of the week is also (thankfully) the easiest. Hairstylists at Bottega Veneta, Alberta Ferretti, Emporio Armani, Etro, Sportmax, and Blumarine all opted to leave models’ strands loose, wavy, and slightly undone — always with a middle part. You don’t need sea salt spray for this look, though; just run a dollop of smoothing cream through your locks before you leave the house. Presto: California beach waves by way of Milan.

There’s a certain irony in Fendi championing sloppy-on-purpose ponytails and topknots for SS20. Karl Lagerfeld, Fendi’s longtime creative director, once famously said, “Sweatpants are a sign of defeat” — and surely, a messy bun is the hairstyle equivalent of sweats, no? Without Lagerfeld at the helm, the fashion house is ready for a fresh start. The new Fendi is all about last night’s pony (and I am all about that).

To be clear: Natural hair is not a trend. Is it, however, finally being embraced on the runway, and that’s something to celebrate. Models at Emporio Armani, Peter Pillotto, Luisa Beccaria, and Genny all let their natural texture shine, and it was — in a word — glorious.

The most unexpected look of the season? Pigtail braids — yup, the kind you wore when you were, like, four. Hairstylists at Max Mara and Antonio Marras proved there is a way to bring the schoolyard aesthetic in your adult life, and it comes down to a precise part and minimal flyaways. Bonus points for weaving in a touch of ribbon, as seen at Antonio Marras.

Prada and Giada presented the perfect option for the woman who just doesn’t do messy: the sleek side part. Both fashion houses sent models down the runway rocking deep side parts, slicked back with hard-hold gel (it’s this season’s take on wet look hair), and tucked behind the ears. No fuss, no mess.

Another option for the frizz-averse is the severe middle-parted bun, as seen at Moschino (painted with actual paint, to fit the Picasso theme), Vivetta (solidified with high-shine hairspray), and Luisa Beccaria (where a middle-parted pony was also acceptable). The trick to pulling it off? Make sure your part is impeccable.