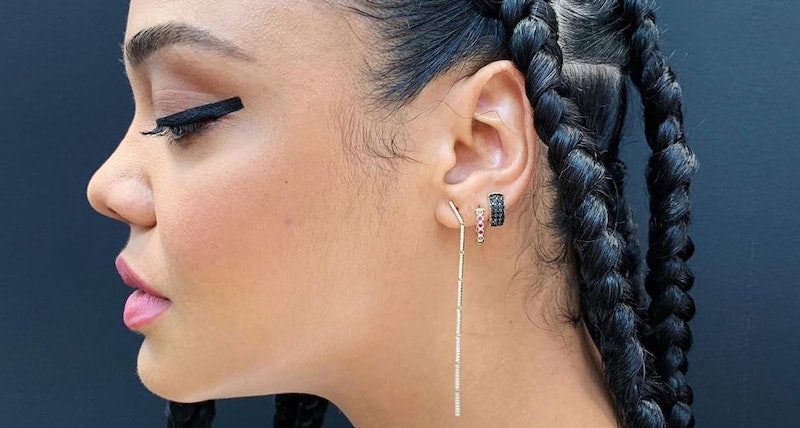 Just like that, July is here and I’m planning out my hairstyles for the weeks ahead. And as the summer heats up, and dreams of being on white sand beaches inch closer to becoming reality, I think that all naturalistas are looking for something that’s both easy to maintain, can withstand the elements, and won’t leave hair revolting at the first signs of water. Luckily for me, there’s tons of inspiration out there to choose from. My favorite celebs are rocking new natural hairstyles including knotless braids, elaborate updos, hair accessories, along styles that incorporate all three, proving that one thing is for sure: this hot girl summer calls for some killer new looks.

But what if I told you that 2019’s scorching months are about to be marked by a different kind of protective style? A style that actually may need the least maintenance of all. According to hairstylist Koni Bennett, whose clients include Jordyn Woods and Leyna Bloom, it’s all about the big chop this summer. “Tapered cuts are having a moment!" the stylist tells TZR. "They are shorter along the nape of the neck, around the ears, and temple, with more length around the crown." But that’s not the only shocker coming in July. This season’s hottest new hair food, and key to healthy curls is actually something ingestible. “I’m seeing lots of Kombucha,” Candace Witherspoon, a curl specialist and Devachan educator says. "It helps balance the PH, which promotes a healthy scalp and also adds shine.”

So whether you’re ready to take a chance with the scissors, are looking to incorporate even more hair into your strands, or just want to embrace your own curls this month, check out 31 looks that you won’t be able to get enough of.

Stylist Hos Hounkpatin created Alexandra Shipp's mega-chic braided chignon complete with a row of shells trailing down to the nape on May 21.

Shipp's June 7 bun may look like it's for professionals only, but the style is actually super-easy to recreate. Simply take each cornrow and wrap them neatly around each other one by one in a pinwheel motion.

Justine Skye looked dazzling as always in this June 13 hairstyle. Add some shine to your feed-in buns by spritzing your hair with a hydrating oil spray.

François added some flair to Willow Smith's look for a July 2019 issue of People by incorporating hair hoops at the bottoms of her dreadlocks.

Tiffany Haddish's June 23 neck-length bob looked especially chic, thanks to some silver bobby pins crisscrossed on the left side.

Actress Indya Moore showed off the versatility of cornrows with these beaded French braids on June 2.

For curls like Sanaa Lathan's (as seen at the Split Screen Festival on June 3), use small perm rods to set your curls overnight.

Try out some extra length this summer like Tessa Thompson, who wore these brilliant oversized knotless braids created by Lacy Redway on June 9.

"I’m tryna tell you something with my eyes," Lizzo captioned on June 9 — but I couldn't stop staring at her gorgeous curly ponytails.

Marsai Martin's draped braid on June 25 got the goddess upgrade with a corner of embellishments that included a variety of accent charms.

Texture reigned supreme for Martin with this voluminous retro puff at the BET Awards on June 23.

The only thing better than one waist-length braid is two. On May 20, Kelly Rowland wore this sleek and dramatic look adorned with bobby pins and hair jewelry.

Inspired by Diana Ross in the 1975 film Mahogany, Nelms recreated this mesmerizing look for Yara Shahidi at the CFDA Awards on June 3.

Nelms formed another magical look for Shahidi using hair pearls for the 2019 BET Awards on June 23.

To recreate Tanerelle's look from the 2019 BET Awards on June 23, stretch your tight curls with large twists until dry, then brush out with a boar bristle brush.

Michelle Williams looked dreamy while heading to the Wearable Art Gala on June 2 with this mesmerizing ponytail designed by Kim Kimble.

Issa Rae delivered her hilarious and powerful speech at the Women In Film Gala on June 13 while rocking this oversized french braid with a single small braid trailing the middle.

Mbatha wowed with long crochet extensions paired with small box braids along the sides and back on June 2.

Moreno pinned Danai Gurira's hair into a sculpted upsweep for the 73rd Tony Awards on June 9.