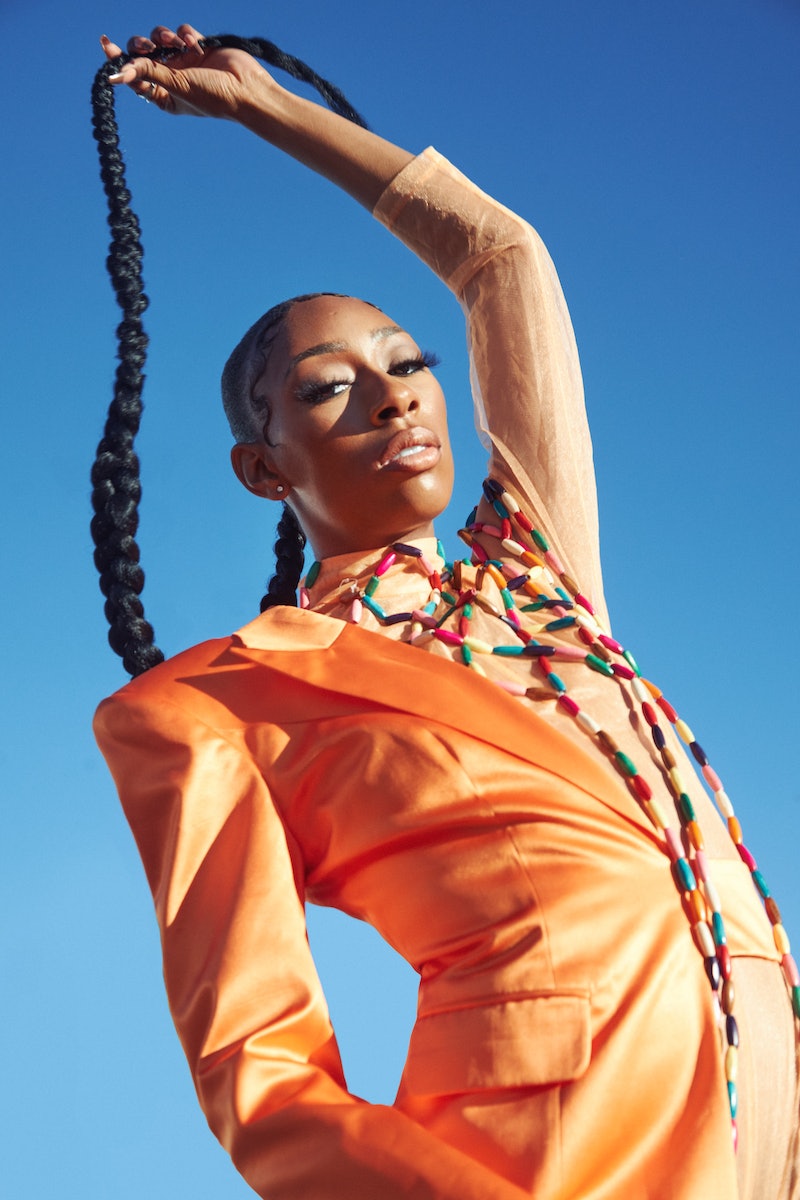 She’s likely already made you laugh on shows like Boomerang, A Black Lady Sketch Show, and Claws, but what you may not yet know of comedian Lala Milan is her weight gain journey. Recently, the up-and-coming star and The Salon podcast host (among many other to-be-announced projects) has been relying on regular sweat sessions in the gym to clear her mind and boost her body confidence in a way that’s not so openly discussed.

Before earning millions of followers across her YouTube channel and social media, the Charleston, South Carolina native first won hearts when she achieved viral status for a video she posted back in 2015. While the instant fame took her by surprise, Milan always knew she was meant to entertain, and wasn’t about to let this moment only last 15 minutes. “When I [went viral] I couldn’t believe it was happening,” she tells The Zoe Report. “It took a little bit of getting used to but I immediately went into business mode where it’s like ‘I gotta take advantage of this opportunity or else it’s gonna take me.’ So that’s pretty much what I did.”

While she’s been working steadily and adding a ton of different titles since then — red carpet host, Fenty Savage ambassador, and entrepreneur of upcoming vaginal health supplement, to name a few — Milan is the first to admit that the entertainment industry is a game, and can at times be a test of self-confidence. “It’s shown me that I am so much more capable than I gave myself credit for,” she explains. “When I get the opportunity, no matter how nervous or anxious, I’m gonna step up to the plate and swing the bat 100 percent. Every time I’ve done that I’ve superseded not only the expectations others have had of me, but the low expectations that I once had set for myself. I didn’t give myself enough credit for being great.”

One thing that’s caused her self-doubt in the past is her naturally thin frame. “I had been telling myself I wanted to start the [fitness] journey but it was for all the wrong reasons,” she says. “Initially it was people saying I need to gain weight.” What changed for Milan in starting a fitness and weight gaining journey was reframing it to encompass what health means for all shapes and size — which she says looks different for everybody.

She started documenting her process on Instagram under the account @fitgirlbod, sharing her workouts consisting of weightlifting and strength training exercises (think squats, lunges, and donkey kicks using dumbbells and/or bands for resistance) as well as nutrition tips. In addition to muscle building moves she’s doing with the help of her trainers, she’s noticed that to keep gaining weight — which she explains can be just as much of a struggle for some as losing it — diet is a huge factor. In her current regimen, Milan works out three days a week (for about 1 to 1.5 hours) and tries to consume 3000 calories per day. This means never skipping meals and filling her plate with a balance of fruits and vegetables, protein, and carbs.

In addition to her daily green juice (she opts for a combo of celery, cucumber, and orange juice for a delicious and energizing start to her day), Milan makes protein-packed shakes to get her calories in. A regular version could consist of egg whites, frozen berries, oats, and flavored protein powder. She also cooks up whole food-filled dishes that are easy to make but still so flavorful, like chicken and rice with mango salsa. When she’s traveling and not able to get into the gym as often, she says she has to keep up with this diet to maintain her gains.

The process has been a slow one (last month she was up 11 pounds, but then lost a little weight after getting sick and losing her appetite), but even the small victories are encouraging both to her, and the fans that have been following along. And their support and connection has been a happy surprise for Milan. “There are a lot of people who want to gain weight who are embarrassed about it,” she says. “Creating that platform allowed women to feel more comfortable. I noticed the page even has women on there who want to lose weight and they’re just there for motivation. I was surprised at the community I was able to build because of something I’m passionate about.” Now, @fitgirlbod has over 86,000 following along, many of whom have been inspired to start their own journeys.

While Milan is happy to be able to encourage others through her own health habits, she says the first thing she’d tell anyone who asks her for tips is that to make it a sustainable practice, you have to be ready to do the work on your own — no excuses. “People always have this habit of [saying] ‘I’m going to start on Monday’,” she tells TZR. “I’ve never been that person. If you are going to start, you’re going to start it then and there.”

Milan says that she believes physical and mental health are intrinsically linked, so many of her self-care practices go hand-in-hand. “If you’re unhealthy and you’re lethargic, that’s going to lead to depression or vice versa,” she explains. “You’ve got to take care of your mental health, your emotional health, your physical health, so they can all work together to be the ultimate healthy version of you. I go to the gym, I get my rest. I eat as healthy as I can. I also stay away from things that are going to drain my energy.”

It’s exactly this healthy outlook that’s keeping Milan propelling forward in her both her self-confidence and her career, and she’s looking forward to what the future holds. “Consistent work and effort is going to lead me to that next opportunity,” she says. And those are some inspiring words to live by.