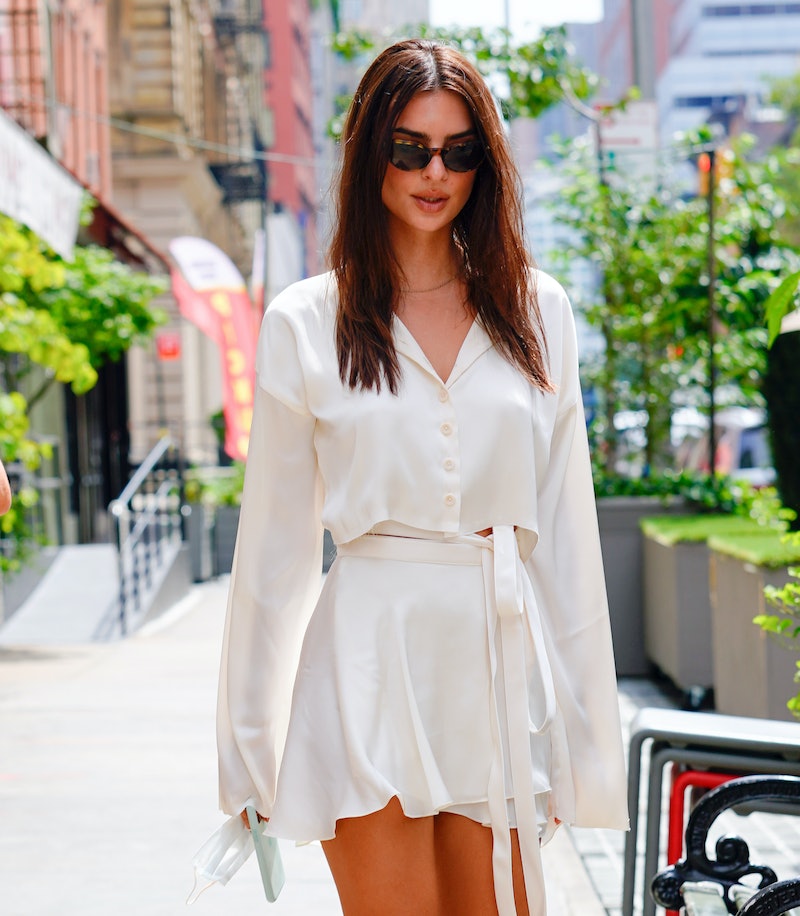 You could never replace your beloved colorist and hairstylist, but lockdown has proven there’s nothing wrong with having a little fun — even if it’s to the slight dismay of your team at the salon. Stars especially have been going over the top with 2020’s newfound chance to get creative with cut and color, and the biggest quarantine hair transformations so far this year haven't disappointed. If anything, they've seemed to convince everyone that they are capable of painting on pink dye and giving themselves a minor (or major) chop.

Even if you’ve been too scared to let anyone (including yourself) touch your hair other than your colorist, seeing celebrities take things to the extreme while stuck at home has been both entertaining and impressive. Since the beginning of this year, opening up Instagram has felt like a drum roll. Which star would dye their locks aqua or blonde next? Who installed their own hair extensions? Which person decided to get scissor-happy?

Luckily, there’s been no shortage of exciting transformations to gape at, many of which ended up turning into unexpected trends. Neon hair dye could be found on a dozen different stars and a mix of super-short hair from the likes of Tiffany Haddish and Ruby Rose rivaled the Rapunzel-like lengths of stars like Ariana Grande, Ciara, and Doja Cat.

Up ahead, see the most impressive looks stars have had done to their hair while locked down.

Even if you've never considered going bald or trying out a buzzcut, Haddish's look is a convincing argument for finally doing it. Rocking it proudly, the comedian cut her own hair super short during an Instagram Live, and later had it completely shaven off. While she wasn't the only celebrity to go short during quarantine, her change was one of the most dramatic and paid off beautifully.

No one deserves the title quarantine chameleon as much as Gerber, who flew through hair colors during lockdown. She went from brunette to bronde to blonde, then blonder, finally landing on a bright pink with roots peeking through. The model is another celebrity who decided to share the process on social, and had hairstylist Guido Palau help her virtually dye it over a Zoom call.

Not everyone can be considered a multi-hyphenate, but early on in quarantine, the singer and MAC Cosmetics Viva Glam ambassador proved to not only be an incredible artist, but a hairstyling pro, too. At the end of March she gave herself bangs, and later on in June, she swapped out her dark brunette locks in for a warm brown color that had a hint of red.

Sure, pink hair was (and still is) a major trend throughout all of lockdown, but Palmer made it her own by opting for an ombré wig with a gradient that went from light peach to hot pink, and even managed to match her makeup to it in a few posts. This was only one of many styles the singer and actor showed her fans on social, also donning lengthy black extensions, gorgeous bouncy twists, and shiny red highlights throughout the year.

Although the actor's hair was pretty short to begin with, her switch from a voluminous short pixie to an edgy buzz cut was still a huge change. Rose also had fun shaving designs into the side of it and freshening up the color, the most playful being when she dyed it half-pink and half-blue.

Even the celebrities who you'd consider to be eternally bound to one hair color shocked the world with their changes, Ratajkowski being one. The supermodel, who's never been seen in a hair color other than brunette, suddenly appeared in a fresh blonde paint job on her feed back in June. She, along with stars like Gerber, Ciara, Ariel Winter, and Millie Bobby Brown, all turned to bleach at some point during quarantine.