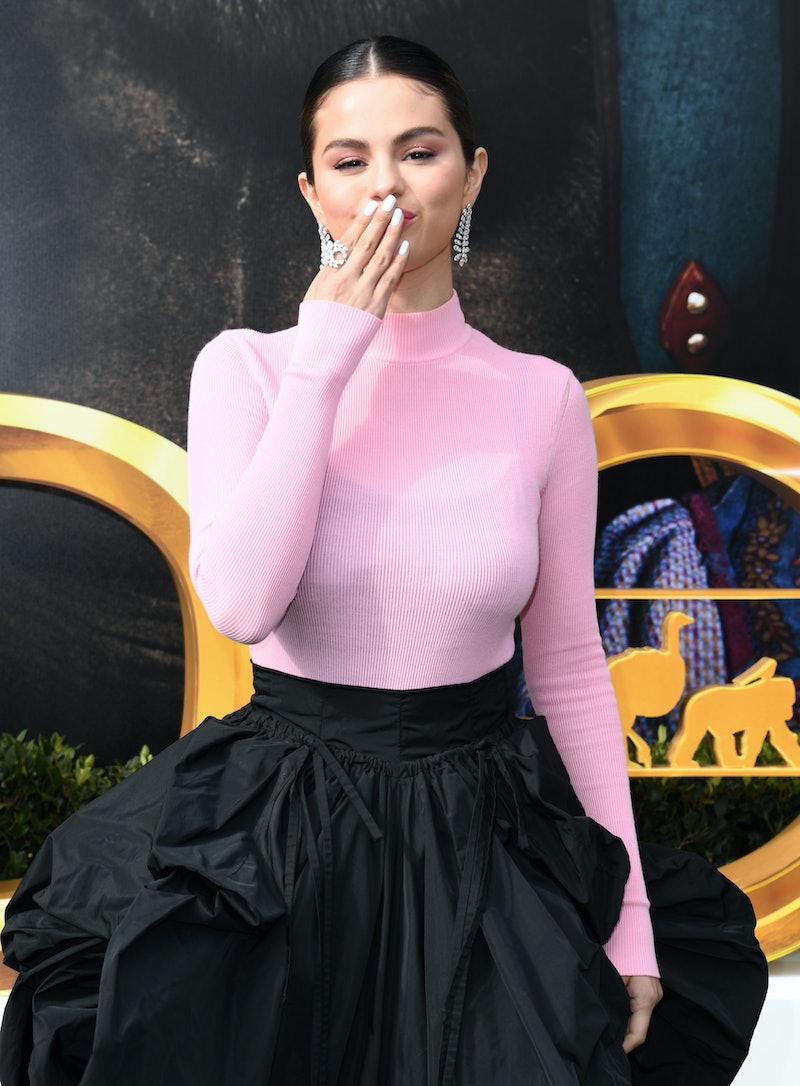 As a celebrity, you have the best nail artists at your fingertips, which makes it tempting to want to try every style out there. You'll find stars like Kylie Jenner, Cardi B, and Jennifer Lopez testing the waters with neon extensions, dangling gems, and sleek stiletto-shaped tips. But even after befriending the most talented makeup geniuses, some celebs still stand by the saying "less is more." That being said, less is never boring, and Selena Gomez's best manicures are the perfect examples of how to make minimal always look exceptionally chic.

Whether she's comfy in sweats at home or donning a gown on the red carpet, Gomez tends to favor a single shade over multiple, and if she opts for embellishments, she still often chooses neutral shades and just a few sparkles rather than going all out. But while most of the styles are minimal, she's experimented with plenty of fun shades that even the color-averse can jump on board with, like indigo, red, and orange.

Below, see Gomez's most iconic manicures that are all impeccably stylish, but easy enough for you to copy.

The epitome of a minimalist nail is obviously a nude polish, and this look Gomez's manicurist Tom Bachik did for her at the 2019 Cannes Film Festival is a simple-yet-elegant take. The glossy finish and rounded shape makes them a touch more eye-catching than a plain, matte neutral.

Bachik decided on a shimmery, dark burgundy polish for Gomez's "Dance Again" music video. Depending on how the light hits it, a color like this can look like a range of different colors — from a deep mocha brown to a wine red.

Selena Gomez's Ultramarine Nails At The 13 Reasons Why Premiere

Bright, ultramarine blue isn't necessarily a minimalist color, but because it's the only color used in this look, it fits in perfectly with the rest of Gomez's peachy nude makeup and accessories she wore for the premiere of 13 Reasons Why.

Although it's bright, red is the perfect playful color for minimalists who want to step a bit outside their comfort zone. This color made an appearance on Gomez, courtesy of Bachik, for her "Boyfriend" music video. It was also a top quarantine choice for the star who shared a pic of herself wearing a similar color on her feed at the end of March, proving you truly can never go wrong with a classic red.

This special occasion was a rare instance when Bachik and Gomez decided to go for extensions for the red carpet. While the length makes them a statement look, the natural pinky nude color subdues it a bit and they paired perfectly with Gomez's soft, feminine makeup and her bright orange Mugler jumpsuit.

Leave it to Gomez to make black look superbly sophisticated and far from the vampy goth vibes this shade usually gets pinned to it. With sharp attention to detail (or extra Q-Tips) and a glossy top coat, you can DIY your own edgy, yet luxe manicure similar to the one she paired with pink silk pajamas in her "I Can't Get Enough" music video.

White has become a go-to color for Gomez over the last few months, and she was seen rocking this hue on The Tonight Show back in January as well as at the premiere of Dolittle. It's a refreshing hue that works in any season for any occasion.

Though it's rare, Gomez does don more than just a plain nail shade from time to time thanks to Bachik, and this version she wore to the 2019 American Music Awards was one of the best. However, the singer still kept it relatively simple, even for a bedazzled mani; Bachik used the blush pink OPI shade Baby, Take A Vow under a shiny top coat and finished with an "artsy Swarovski crescendo of sparkle," as he said in his Instagram post.

While this neon orange mani by Bachik wasn't done for any particular special occasion, the color itself is too iconic not to feature. Although he didn't specify what shade he selected, Bachik mentioned he used Tammy Taylor polish to make Gomez's nails pop. It's dazzlingly bright; it's powerfully bold; and it needs no other embellishments because of the color alone.