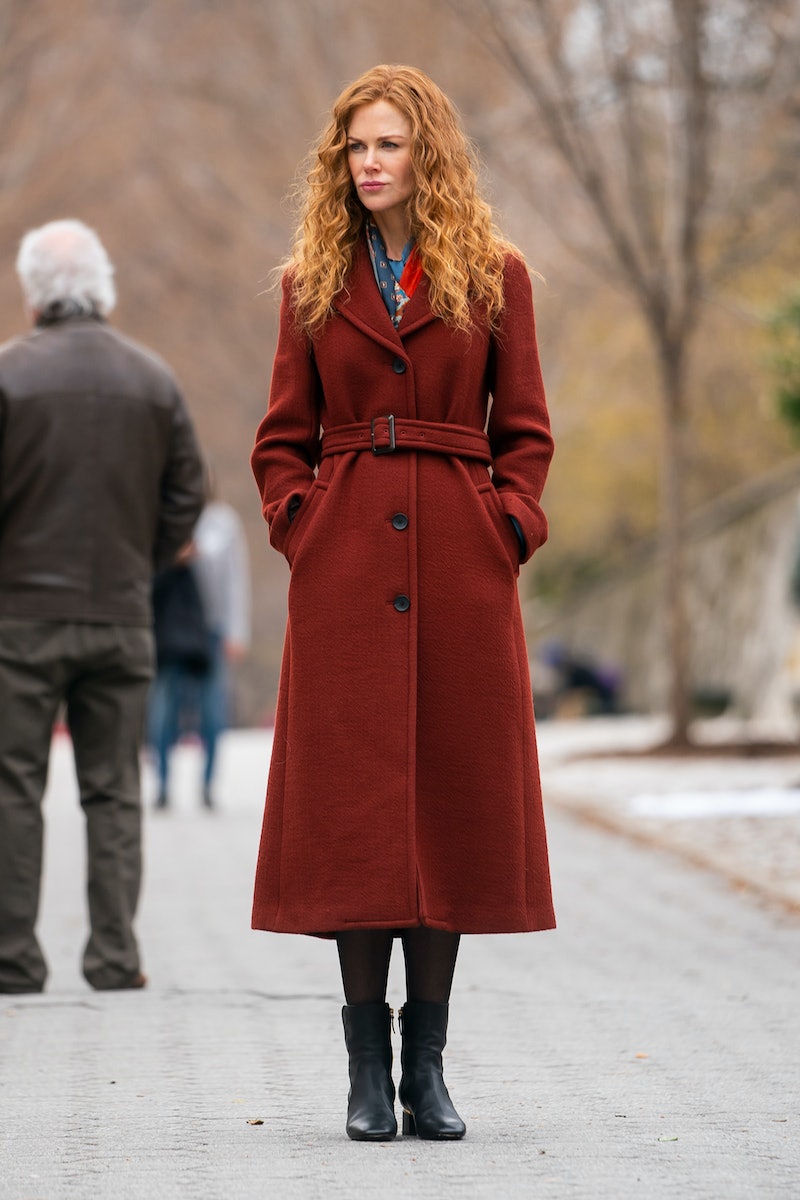 For those who blew through The Undoing, HBO's edgy, electric whodunit starring Nicole Kidman, it's likely that you found yourself entranced by Grace Fraser's melange of cocoon-like coat outfits through the show's six-part run. While grappling with infidelity, murder, and all the trappings of Upper East Side life, her enigmatic sensibility nearly steals the show — and it's not by mistake. Nicole Kidman's outfits in The Undoing were, among other things, designed to add to the mystique of the ordeal, according to the program's costume designer Signe Sejlund.

"I wanted her to be mysterious and magical ... and I wanted to create a look on Nicole never seen before," Sejlund, whose credits range from Bird Box to Serena, tells TZR over email. "Her pale skin and her big, long, red curly hair has something almost fairytale to it." From her head to her heels, Kidman's Fraser is deluged in ultra-luxe fashion items — remarkable burgundy coats from 3.1 Phillip Lim, camel pencil skirts from The Row, and silk crepe dresses from Bottega Veneta — all of which feel right at home in an uptown closet.

While Fraser's wardrobe is notably upmarket, flaunting opulence was not on Sejlund's agenda when crafting her look. "Her style choice is not about showing wealth ... You will never find any visible logos in her wardrobe," she shares. Instead, the quality textures and elegant shapes chosen speak for themselves, offering a subdued sense of luxury that viewers are readily embracing. "I have tried to make her a wardrobe that is timeless and classic, and still blends in with Upper East [Siders]."

What was intentional was the compelling, autumnal color story, with contrasting hues paired together in near-every outfit. Fraser wears pear green trenches with bordeaux-hued gloves and boots, and cherry red peacoats with charcoal-colored accoutrements. These carefully-placed contrasts could point to Fraser's own indecision, as she struggles to believe, stand by, and defend her husband, Jonathan. When asked about it, Sejlund only said that on a scene-by-scene basis, her fashions were not meant to reveal the plot. "[It] was always a secret ... As it should be," she says.

Fraser's jewelry pieces, however, do have a clear symbolic tie to her character, according to emerging jewelry designer Rebecca Elbek. "Signe and I had meetings where [she explained] the character of Grace Fraser," Elbek tells TZR. "Signe was looking for some different jewelry pieces that [felt] dreamy, and at the same time, high-end." After talking, drawing, and creating prototypes, the two decided on three rings and one set of earrings — each with symbolism tied to Fraser's character.

"The Scarab Ring [represents] mystery and protection; the Owl Ring for wisdom and intuitive knowledge." The former aligns with the show's theme; the latter, with her career as a Harvard-educated psychotherapist. "The Nomad Ring: free and confident spirit, a wanderer." (The Undoing fans all know how much Fraser loves her evening walks.) As for the 'Secret Woman' Earrings — "A real beauty, full of secrets," according to Elbek.

To shop out alternates to her show-stealing pieces, browse ahead.