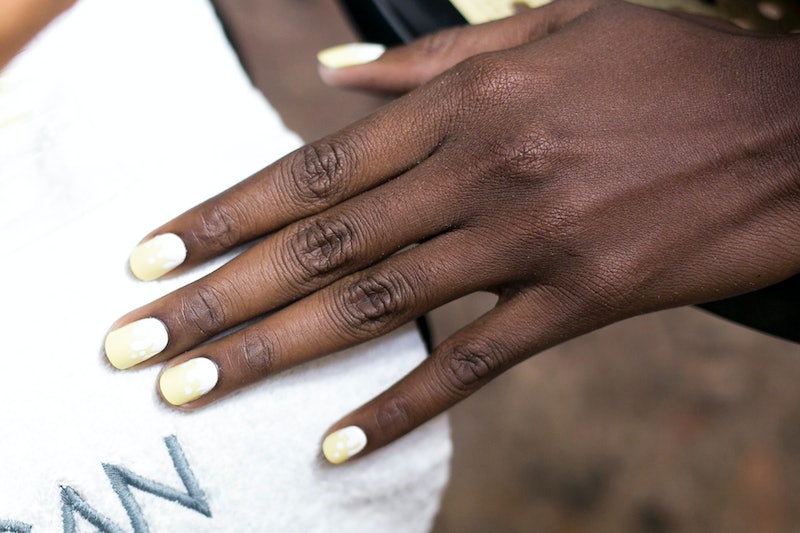 There are some nail services that are trickier to do at home, like perfecting a gel manicure that doesn't bubble or recreating one of Betina Goldstein's breathtaking designs. But achieving the basics — like shaping your nails — are nearly foolproof.

"Examine your hands, fingers, and nails to get an idea about their relative proportions, then choose the nail shape that suits you best," Jin Soon Choi, celebrity manicurist and founder of JINsoon nail salon in New York, tells TZR. She says you'll position the nail file at a different angle according to the different nail shapes you're hoping to achieve. "I like to file the tip of the nail first for square and squ-oval, and from side to side for round, oval, and pointed shapes to balance the shape better."

For your tools, all you need is a sharp nail clipper and good nail file, according to Chelsea King, celebrity and editorial manicurist who works with stars like Sam Smith and Taraji P Henson. "Nail clippers come in different shapes, straight or curved edges, and it’s all a matter of preference," King says. If you like your nails super square, she suggests using a straight edge clipper. Otherwise, a curve edge will suffice. "As for nail files, I like to stick to around a 180 or 240 grit — the higher the grit, the smoother the file," the nail expert says. "If it’s too rough, it will tear the nail and can cause future breakage."

Be your own nail tech by following the steps for shaping nails below. And have a pretty polish nearby and ready to go.

How To Shape Nails: Square Shape

"First, use a straight edge nail clipper to trim your nails as straight as you can. It’s best to not trim the nail in one clip, but rather clip across the nail a couple of times," King notes. "Then, use your file perpendicular and 90 degrees flat on the nail and file in one direction." King says she likes to finish off a square shape by softening the corners by gently filing, so they won't catch on anything.

How To Shape Nails: Round Shape

Timia Knox, a nail artist in Colorado and owner of Prissy Bee Nails, says that round nails are usually the easiest shape to achieve as most people have naturally round nails. To start, grab a curved nail clipper to achieve your desired shape. Then you'll round the corners of the nail by using your nail filer, filing in a curved motion from the side wall to the center of the free edge on each side, Knox explains. Lastly, remove any ragged edges under the nails.

How To Shape Nails: Oval Shape

Choi says an oval shape is between round and pointed, and good for someone with long nails. Achieve the shape by filing in one direction toward the center of the nail, Mimi D, a celebrity manicurist and nail artist who works with Ciara and Beyonce, explains. Go from left to center, then alternate right to center. "Do one to three strokes at a time, stopping to check to make sure both sides are even," the celeb nail artist says. And to prevent damage, Gina Edwards, a celebrity nail stylist who works with Tracee Ellis Ross and Gigi Hadid, says to stay clear of filling the sides too much where the stress points of your nails (the sidewalls of the nails where the nail plate starts to extend from bed), because in turn, it can make your nails weak. "Always file your nails in one direction to prevent shredding and splitting," she says.

How To Shape Nails: Stiletto Shape

If you have strong, long nails, or if you have acrylic or gel, you might be able to do a stiletto shape, according to Elle Gerstein, a celebrity nail artist whose clients include Jennifer Lopez and Blake Lively, tells TZR. "It's all about how you keep tapering that file, and you would just go from a little bit underneath the nail," Gerstein explains. "You don't want to go straight on, you want to get that file going from underneath on a diagonal."

This article was originally published on 8.2.2020