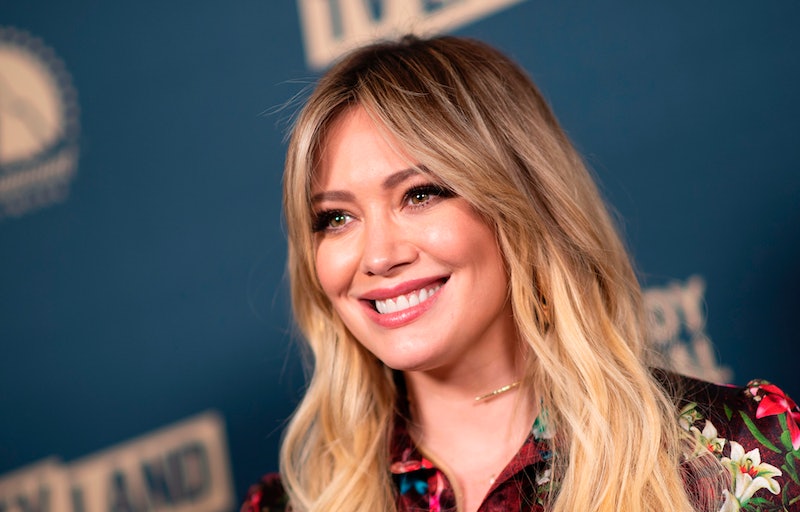 There were two important things to learn from Hilary Duff's "daytime holiday makeup tutorial", which the actor shared via IGTV on her Instagram account Dec. 16. One: all of the skincare and beauty products that she currently uses, which is a gift in itself. Two: Hilary Duff's short bob is a thing now. "I just chopped my hair," Duff noted a few minutes into the video — confirming that yes, this is a new style for the actor. (Though anyone obsessively keeping up with any and all Lizzie McGuire reboot news could've told you that.)

Lucky for fans of the returning show, Duff's signature blonde shade hasn't gone anywhere. The IGTV makeup tutorial shows that the actor still has her sun-kissed blonde hair, complete with nearly platinum highlights and darker, root-transitioning lowlights. Though it does look like Duff's Lizzie-inspired bangs may have, in fact, been clip-ins after all: While the video does show that Duff has shorter, face-framing sections that accent her cheekbones, the eyelash-grazing bangs are nowhere to be found.

Duff isn't the only celeb to embrace a shorter style for December. Actor Ashley Benson and model Kaia Gerber both sprung for a sleek bob haircut this month — following the trendy short style's reign in fall 2019, where it was spotted on Karlie Kloss, Bella Hadid, and Kim Kardashian West.

For those who don't want to lose too much length, longer bobs (aka lobs) were just as popular, too; just take a peek at J. Lo's lob to be inspired. Or, the shoulder-length lob Priyanka Chopra got back in September, which still gave the star enough length to curl her tresses.

And with so many styles to use as haircut inspo, you very well may want to join in the fun. If so, keep on scrolling. Below are a handful of haircare products to keep in your cabinet if you, too, ask for a short bob the next time you're at the salon.

Crafted from a blend of boar and nylon bristles, this bamboo brush will help you create sleek, Duff-like styles.

Any haircut, regardless of length, could benefit from a silicone- and sulfate-free haircare routine like Briogeo's Superfoods kit — which includes two types of shampoo and conditioner.