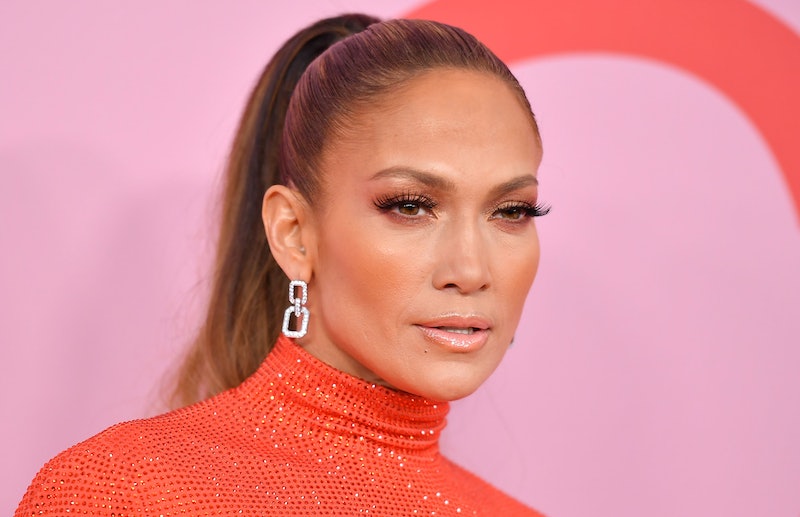 Jennifer Lopez's lob is officially back in business. After the star was spotted with longer, caramel-colored hair earlier this fall — most notably on Versace's runway, while wearing the green dress — J.Lo's new lob haircut marks a return to the shoulder-length style she wore late this summer. And like the previous cut, this breezy new look comes courtesy of hairstylist Chris Appleton.

As Appleton so expertly phrased it in the Instagram caption on the inaugural cut, it's "long to short real quick" — a move any fan can tell you J.Lo has mastered. And like the OG lob, this most recent haircut features equally multidimensional color; J.Lo's new style shifts effortlessly between the actor's brunette roots and lighter splashes of blonde, with a few well-placed waves showcasing the sunny shades.

Naturally, J.Lo had to share her fresh look with her followers on IG. "These guys...doing what they do..." the star captioned a Nov. 11 selfie, which featured both Appleton and makeup artist Scott Barnes in the background. It's safe to say that her fans are just as excited as she is about the lob's return: The pic garnered more than 1.8 million likes and close to 10,000 comments in less than 24 hours.

And while the tousled bob itself merits a spot on your mood board, the star's impeccably placed highlights should get an award for their supporting role. Appleton posted another selfie with just J.Lo on his own Instagram page in different lighting — which shows off just how well the buttery, face-framing highlights complement the actor's glowing skin and signature smoky makeup.

J.Lo isn't the only celeb to embrace lighter hues for the colder weather. Charlize Theron's new blonde pixie cut is an obvious choice, while subtler transformations — like Taraji P. Henson's cinnamon blonde and Kate Middleton's honey-colored highlights — prove that adding in a touch here and there can be all it takes to transform your entire look. And it goes without saying that a lob has been one of the most popular cuts this season.

Spritz this thickening spray into damp hair before your styling routine to add J.Lo-level volume and fullness.

OUAI's Matte Pomade will provide added texture so you can easily recreate that piecey, tousled look that Appleton has mastered.