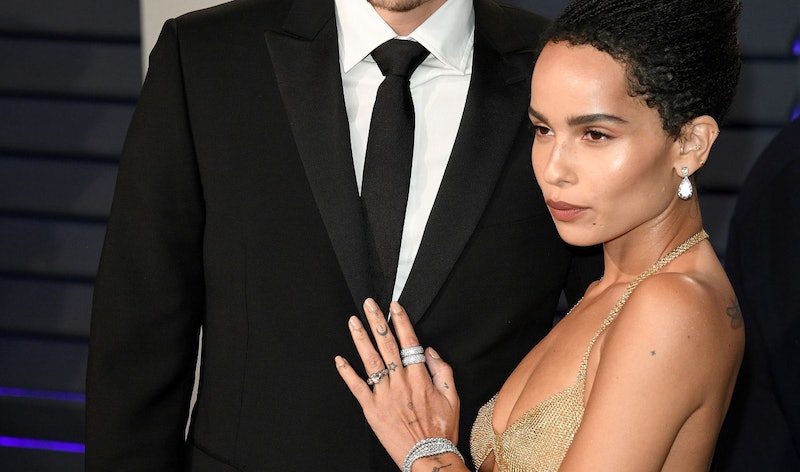 There's tons of brides out there that opt for the big white wedding and the clear diamond sparkler — but for those that typically go against the grain, traditional engagement rings are likely not going to cut it. Each forever piece should be a reflection of the wearer itself, which is why all the coolest celebrity brides are wearing rings that subvert tradition in favor of something more unique. Whether that be antique, gothic, or art deco — well, that depends on the person. TZR's rounded up the top unconventional celebrity engagement rings that forego tradition, all of which today's brides-to-be can pilfer inspiration from.

The personalities passing on cookie-cutter dazzlers are as varied as you'd expect. There's Mary-Kate Olsen, whose vintage Cartier ring dates back all the way to the '50s; Zoe Kravitz, whose ring throws it back many years further (to 1770), and Scarlett Johansson, who went with a light brown diamond, believe it or not. Each of their rings encourage playing with stones and settings — which Victorian-era styles first popularized, and COVID-19-era brides have reverted back to amidst drastic changes to traditional engagements.

To browse the most unusual, iconic rings and peruse similar styles that you can shop today, read on.

The Marriage Story actress has always been one-of-a-kind — which then-fiancé Colin Jost showed her with a light brown diamond in an unusual chocolate brown setting. Experts are waging a guess that the ring is from Robert De Givenchy's high jewelry house, TAFFIN.

The designer behind The Row is known for her quiet, all-black outfits — and yet, her sparkler is anything but low-key. The vintage Cartier ring was designed in 1953, and features a blue sapphire halo and floral-shaped gallery. While hers is a rare find, there are a few just like it, most of which also date back to the mid-20th century.

While Halle Berry's ring comes with a minimalist setting that's more trad than the rest, her square-cut emerald is what sets it apart. In a yellow gold setting, the pairing is quite unique.

The maximalist songstress is often associated with her aughts-worthy personal style — which her ring aligned with perfectly. The chunky gold band featured a star-shaped engraving, punctuated by a colorless round diamond.

"It’s only fitting that [Zoe's] dream ring would be one that is both completely unique, and lifetimes away from the 'traditional' engagement rings we tend to see today," Mia Moss, who founded the site Kravitz first spotted her ring on, told Vogue UK. Her now-husband Karl Glusman proposed with an antique Georgian ring from the 18th century. Each diamond is bedded in foil, an old practice specifically engineered so that the ring sparkles in candlelight.

This artful ring was designed by Neil Lane, with a marquise diamond set in platinum and yellow gold. The rest of the edgy ring is decorated in rubies and white diamonds (140, to be exact).

Shaking up the emerald sparkler trend, Wilde's ring relegates its emeralds to the halo, with a round diamond at its center. The piece puts a modern spin on the Victorian-era colored stone trend.

Of course, Julia Roberts' ring needed to match up to her ever-enduring beauty. Hers appears to be green tourmaline stone in a white gold or diamond-accented platinum band, according to Kathryn Money, vice president of strategy and merchandising at Brilliant Earth,