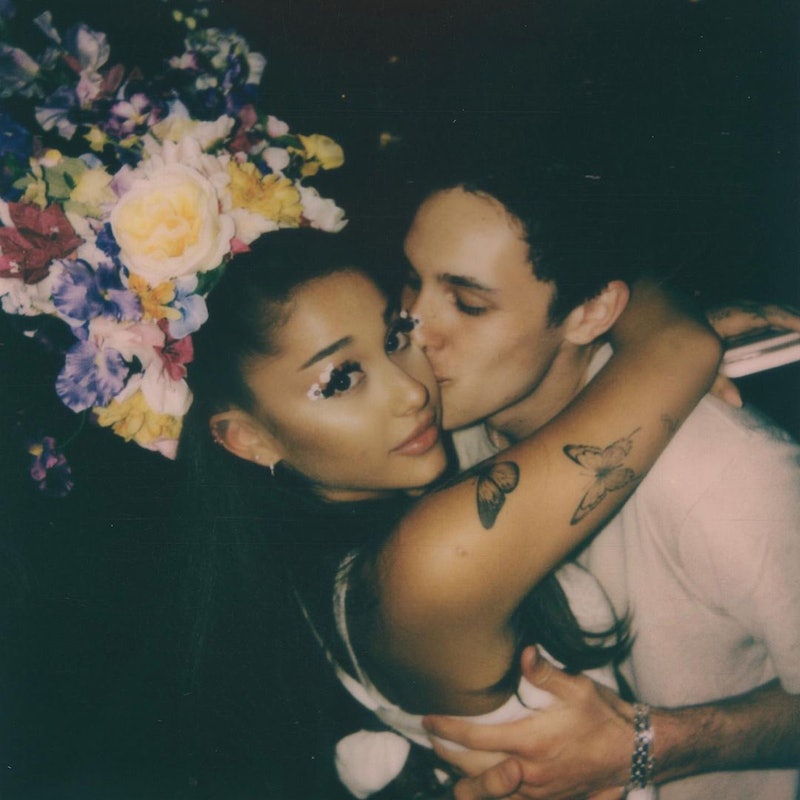 Attention: everyone's favorite ultra-glam songstress is engaged. After several months of dating, commemorated coyly through the music video of quarantine anthem "Stuck With U" — Ariana Grande is engaged to boyfriend and real estate agent Dalton Gomez. The announcement came amidst a carousel of cozy images with her beau, cemented by a close-up of a pearlescent sparker on that finger. "Forever n then some," she captioned the post sharing the news. Following the duo's largely-private relationship, the news of their engagement came as a welcomed surprise — as did the ring style chosen.

“It looks like a spin on the popular Toi et Moi two stone ring," shares GIA-certified gemologist and founder of The Clear Cut, Olivia Landau. "Ever since Emily Ratajkowski got engaged with a Toi et Moi diamond engagement ring, they have exploded onto the scene! People love the uniqueness of the two stones and the symbolism of love and partnership." What unquestionably sets Grande's apart from all the rest is the spherical pearl affixed to the left side of the large oval diamond. Though seldom seen in modern rings, the diamond-pearl duo was popular in Edwardian and Victorian-era engagement rings, which typically featured ornate filigree embellishments. Grande's slender band (which appears to be white gold) puts a modern spin on the timeless pairing.

Pearls are generally a less-frequent pick for engagement rings, as they are less durable than diamonds and other precious stones. However, the deeper meaning they carry feels right at home on a forever band. "Pearls tend to signify purity, faith, and loyalty. They have a feminine and organic aesthetic which is very appealing," shares Laundau. What's more: they also hold a deeper familial significance to Grande. "Nonna had a ring made for me w/ the pearl from grandpa's tie pin. she says he told her in a dream it'd protect me. <3," she wrote in a tweet back in 2014. While it's unclear whether the ring Gomez proposed with used the exact same pearl, "Arianators" are fans of the theory. Toi et Moi rings are popular for those looking to utilize a family heirloom stone in a new and exciting way, so it isn't totally off-base.

To browse similar engagement ring styles invoking pearls and diamonds, browse below — as more are sure to pop up in no time.