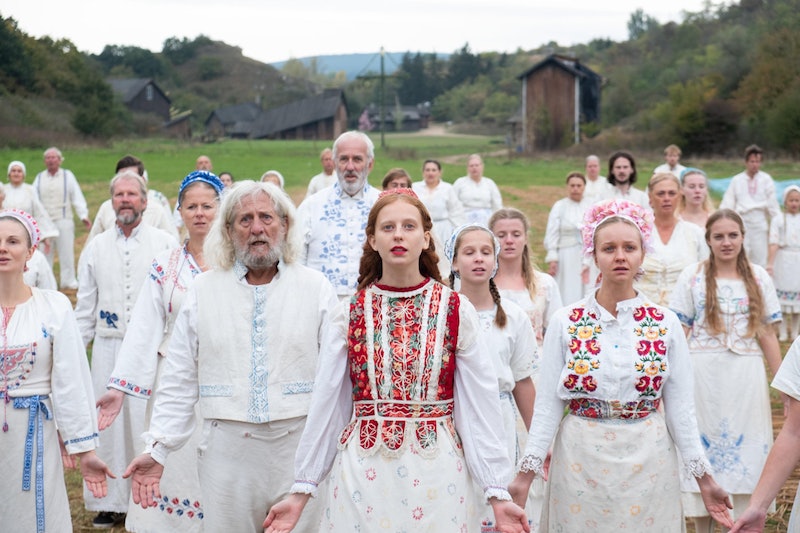 Halloween will likely look a lot different this year, given social distancing limitations — but that doesn't mean you can't still embrace some of the usual traditions. Who says you can't dress up (even if only for the 'gram), carve pumpkins, indulge in candy, and of course turn on a frightening film or two? And if you're planning on including the latter in your celebrations this month, you might want to consider adding some of the most visually stunning scary movies to your list.

Scary movies aren't all created equally. For some, the fear factor is all about guts and gore, while for others it's more subtle and psychological. And though there have been celebrated films of both categories for decades now (whether award winning or simply cult status), the genre these days is arguably being taken more seriously than ever. But where would the Ari Asters of the world be without the Stanley Kubricks or Brian De Palmas?

Sure, you love to be spooked by a good scary movie, but some directors want you to be visually seduced, too, with luscious costume design, fantastical sets, and sweeping cinematography in addition to the nightmarish stuff. And the most visually impressive of all times range from pure camp to romantic, gothic drama — with a little something for every kind of horror film lover. And if you want to try something new this year, the ahead list offers 10 options that are classic, contemporary, and cult favorites from the 60s to current day. So grab the candy, get cozy on the couch, and stream one of these to have the most stylish Halloween ever — without even leaving the house.

Stanley Kubrick is probably one of the first directors that comes to mind when you think of movies that are as scary as they are visually masterful — with The Shining at the top of the list. The wardrobe, the sets, and so many of the lines from the 1980 horror film about a writer driven to hysteria in isolation have remained cultural touchstones, and inspired so many cinematic moments that followed.

From the stylized sets to the supernatural plot, Dario Argento's quintessential 70s horror movie — about a dancer enrolled in an academy that's revealed to be something much more sinister — Suspiria became such a cult classic, it recently inspired a Luca Guadagnino-directed remake in 2018 that's arguably just as strange and stylish.

Brian De Palma was a master of the scary-yet-stylish movie genre, but perhaps none of his films exemplify this better than Carrie, which focuses on a sheltered and socially outcast senior who taps into her telekinetic powers to seek revenge on her bullies.

With a slew of stars who are style icons in their own right — including David Bowie, Catherine Deneuve, and Susan Sarandon — this 1983 film that follows a seductive vampire and her lovers has been praised for its aesthetic contributions (makeup, special effects, and cinematography specifically) as well as its eroticism.

With a plot that involves laser-eyed cats and killer pianos, it's easy to think of 1977 Japanese horror film House as camp — and though you'll certainly be giggling through some of the over-the-top imagery, it's legitimately scary, too.

Based on Anne Rice's 1976 novel, this quintessential 90s vampire movie marks a few significant moments: Peak heartthrob status for Tom Cruise and Brad Pitt, and the introduction of Kirsten Dunst. But what also makes it so memorable is its gorgeous gothic/romantic art direction.

You'll never look at a bird the same way after a viewing of this 1963 classic Hitchcock flick. Starring 60s style icon Tippi Hedron in her very first film role, The Birds is the kind of creepy (as opposed to gory), psychological horror film with imagery that sticks with you long after a viewing.

A follow-up to his nightmarish movie 2018 movie Hereditary, Ari Aster's Midsommar — released in 2019 — takes place on what at first appears an idyllic Swedish commune during the seasonal celebration that's the film's title. The landscape and characters in it quickly become more eery by the second (while the relationship dynamics unravel), which makes for visuals that instantly earned a place in the horror canon.

Visually Stunning Scary Movie: The Cook, The Thief, His Wife, & Her Lover

This 1968 psychological horror film starring Mia Farrow and John Cassavetes still holds up as a gold standard for contemporary scary movies. With themes of the occult and religion, Rosemary's Baby manages to be deeply terrifying without any gore, sincerely acted, and extremely cinematically artistic.