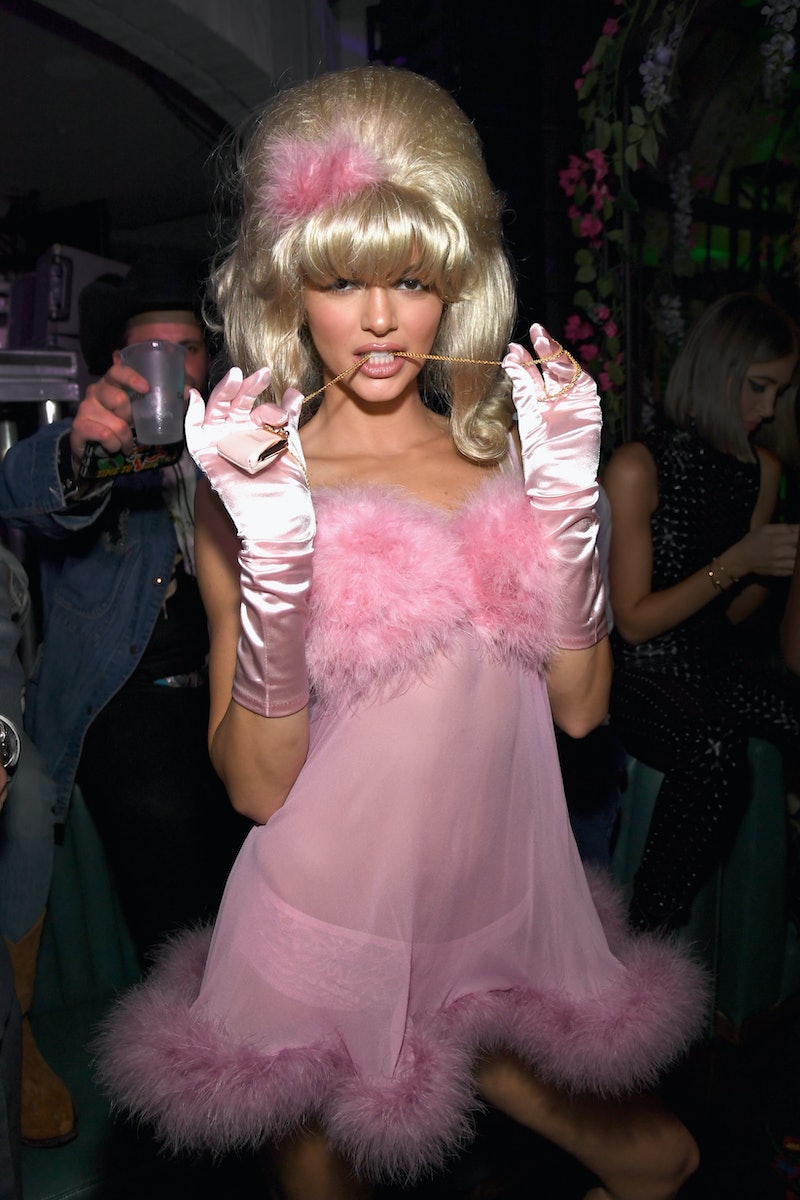 Even if you aren’t going anywhere for Halloween, the playful holiday is always one worth celebrating — just ask your favorite celebrities. Any look at Hollywood’s red carpets will tell you that its top players love to dress up. But when it comes to Halloween, the stakes can feel even higher. The industry’s spooky traditions typically include everything you can imagine, including the best celebrity Halloween costumes — and while the celebrations may be on a smaller scale, there’s no doubt it’ll be the same this year.

If Hollywood’s approach to the festive holiday is any indication, you can get into the spirit as much or as little as you want. Channel Zoe Kravitz's Halloween energy with a chic cozy ensemble easy to emulate. Or, if you prefer to go with a fashion-forward approach, opt for a costume like Lupita Nyong'o's take on Dionne from Clueless. In any case, you can always channel your favorite Hollywood icon like Cindy Crawford, who made an appearance on The Tonight Show with Jay Leno in 1996 as Marilyn Monroe.

Ready to get some inspiration for your Halloween celebrations? Scroll down to see TZR’s picks on the best celebrity costumes to date.

Could there be a more iconic costume for Halloween than Winona Ryder's Lydia Deetz of Beetlejuice? For Bella Hadid, the answer is probably no. The model gave the character a chic spin with a red tulle dress and matching leggings.

Lupita Nyong'o went for a costume inspired by the cult-classic film Clueless in 2018. The Oscar-winning actor finished off the look with a bulky cell phone to give her costume the final touch.

Heidi Klum's annual bash dubbed her the unofficial queen of Halloween. But, before then, Klum opted for (slightly) simpler costumes, like her Lady Godiva look from 2002.

When in doubt, channel an iconic decade like Kaia Gerber, who dressed as a '70s disco dancer in 2017.

Rihanna opted for a costume with edge in 2018, where she donned a leather corset, pants, and gloves. For her makeup look, the star painted her face to look like a pink skull.

If you love to get creative with your costumes, take a cue from Zoë Kravitz, who dressed as an awakened vampire in 2016. The actor created the look with a robe, pajamas, a towel wrap, and other cozy pieces that were embellished with fake blood.

Jamie Lee Curtis didn't shy away from bold looks in 1998 — and her leopard Halloween costume is no exception.

Lily-Rose Depp went chose to take the high-fashion route for a Halloween party she hosted for V Magazine with Chanel. The actor sported a look reminiscent of old-school circus ring leader.

Kendall Jenner attended the Casamigos Halloween Party in 2018 as a fembot from the Austin Powers films.

Alessandra Ambrosio opted for a fantastical costume in 2017, when she dressed as a shining white unicorn.

Model Winnie Harlow looked to RuPaul as inspiration for her Halloween costume in 2018. The look featured a bright red coordinated ensemble with a lush faux fur coat.

In 2008, the late actor dressed up as Daisy Duke for a '70s themed Halloween party. Murphy donned extra short denim cutoffs to create the iconic look.

Mariah Carey became a glittering mermaid for a festive celebration in 2003.

Kim Kardashian chose Wonder Woman for her costume when she hosted her Halloween party in 2008.

Chrissy Teigen embraced her playful nature with an elaborate Toddlers & Tiaras costume in 2012, inspired by the hit show.

While many have opted for the iconic Grease character for their Halloween looks, Hadid's take on Sandy from 2015 — complete with voluminous girls to the bright red bumps — feels spot on.

In 2016, Academy Award-nominated actor Cynthia Erivo opted for a head-to-toe transformation to become Neytiri from the 2009 film Avatar.

This article was originally published on 10.7.2020