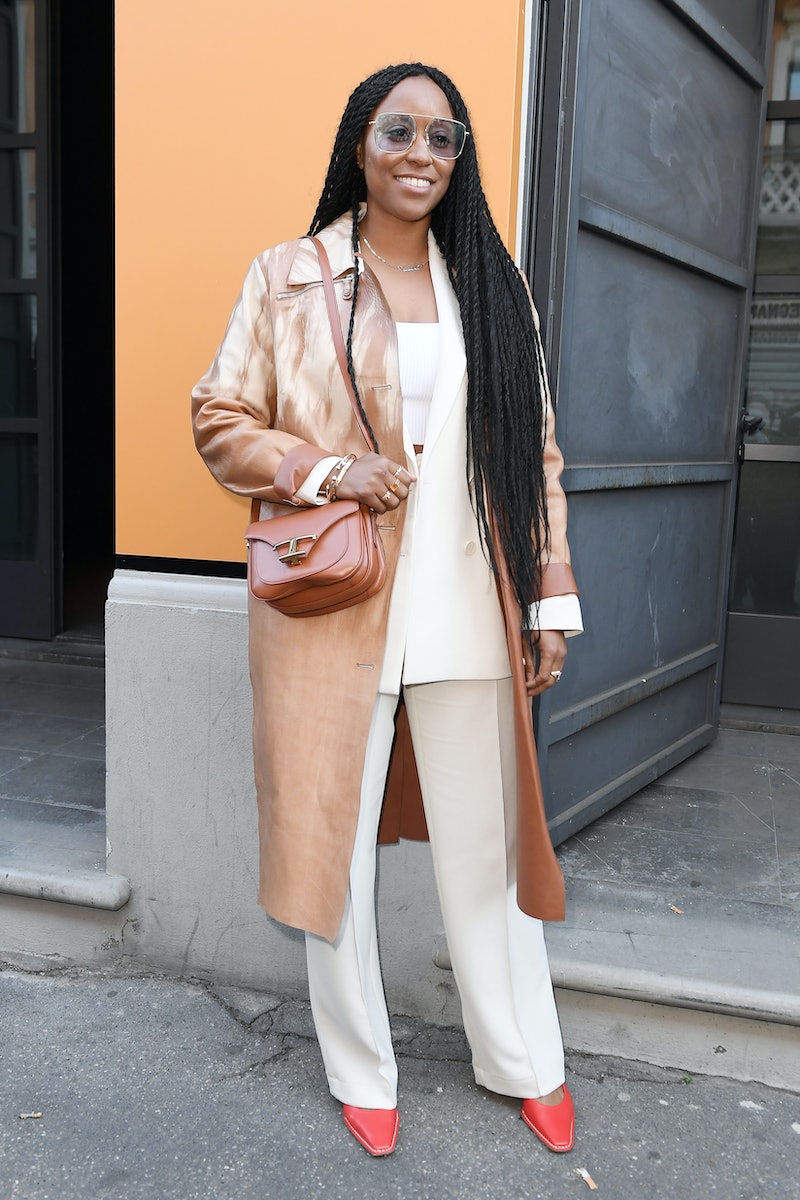 If you've bookmarked Zendaya's red carpet looks or tuned into HBO's Insecure or Netflix's Styling Hollywood then you already know the work of Law Roach, Shiona Turini, and Jason Bolden. Stylists across print media, television, and on the red carpet, have given those interested in fashion a closer look behind the scenes thanks to social media. And some of the industry's most prolific Black fashion stylists are worth following now if you haven't started already.

Stylists have always been some of the fashion industry's unsung heroes. They, along with teams of photographers, set designers, and producers, are responsible for the shoots, red carpet, and editorial moments that fill magazine covers and social feeds. Most of the time, when you set your sights on a new trend, garment, or way to wear it as demonstrated by a celeb, the creative stylist is to thank. For example, the stylists behind Celine Dion's Titanic homage and Jorja Smith's '90s-inspired street style are both included ahead. So, what better way to show your support for said stylists — plus keep on eye on the next big thing for yourself — than to recognize these trend-setters and follow their work as they continue to rise.

Below, find just a small representation of the countless Black stylists worth following; learn more of both their work, and what their interests are when they're off the clock.

Solange Knowles, Serena Williams, and Paloma Elsesser are just a few of the heavy-hitters that rely on the New York-based powerhouse's impeccable taste. Franklin is also responsible for cover looks like Tracee Ellis Ross in Christopher Kane in Porter as well as Them's cover story on Janelle Monáe. Franklin's Instagram feed also shares iconic moments from Black female history, making her a very important follow to add to your timeline.

James-Williams has a vast resume, including time as contributing senior style editor at TZR. She's styled countless cover shoots ranging from Stacey Abrams for Bustle to Justine Skye for Essence and runway shows including Chromat Spring/Summer 2020. The editor and creative is also the founder of Apartment 4, a conscious living platform with constant home decor inspo.

Ambrose is an established celebrity stylist in the industry with extensive credits that include designing Missy Elliot's legendary patent leather suit seen her "The Rain (Supa Dupa Fly)" video released in 1997. Her long history has culminated an extensive list of clients like loyal pal Jay Z's best fashion moments (for example, wearing a suit with no shirt in Beyoncé's ground-breaking 'Apes**t' music video).

Turini has been in the industry for more than a decade as a consultant, editor, stylist, and costume designer. Her past work includes time at publications like W Magazine, Cosmopolitan, Teen Vogue, The Cut, and CR Fashion Book, where she worked alongside Carine Roitfeld. She's styled some of the entertainment industry's most elite like Kerry Washington and Solange Knowles. She was also the costume designer for Queen & Slim (for which she was nominated for a Costume Designer’s Guild Award) and is now doing the same for the HBO show Insecure.

The New Yorker is considered one of the all-time greats at her craft. You've seen her work span decades from Naomi Campbell's applauded Playboy shoot to her recent Vogue Hong Kong cover. Wilson is the force behind that attention-grabbing Kim Kardashian Interview cover as well as Nicki Minaj's ground-breaking styling for the artist's collaboration with Fendi.

The 27-year-old Dallas native has quite the portfolio including artists like Kehlani, Kali Uchis, Trippie Red, and Noah Cyrus. Plus, she just recently styled Ciara for the cover of Vault Magazine and is also the founder of Cool Girls Do Things, a community-based platform for female creatives.

Ever wonder who's to thank for some of the biggest athletes' on-point off-duty style? That would be Dex Robinson. He runs DexRob, an imagery and branding consulting agency, and styles Young Thug, Dave East, and Desiigner plus a whole slew of athletes across the NBA and NFL. Robinson also has his own collaborations including a partnership with Nike.

Samuel has worked with major stars like Letitia Wright, Cynthia Erivo, and Michael B. Jordan, and this year she co-designed and creative directed Justine Skye's collab with H&M. Samuel also has her own eponymous footwear line.

Law Roach started his fashion career opening a vintage store in Chicago but quickly rose in the ranks when he began styling thanks to his sharp eye and daring clients. Zendaya, Anne Hathaway, Celine Dion, and Kerry Washington have all been dressed by Roach, both for the red carpet and on major magazine covers.

EJ King is Megan Thee Stallion's go-to mind for fashion guidance. He's recently styled her for HBO Max series Legendary in custom creations from designers like Valentino Omar and Angel Brinks as well as her new May 2020 Marie Claire cover. He's also worked with major names like Ashanti and Karrueche Tran, and even was an extra in the film Dream Girls in his early career.

Meet Fatima, the menswear stylist to thank for some of your favorite rappers' best fashion moments. The elite dresser has long been deeply rooted in the music industry, just a few of her loyal clients include musicians 21Savage, Meek Mill, Metro Boomin, and Wiz Khalifa (she put him in that striking polka-dot fur jacket on his O.N.I.F.C. album cover). She's already been featured by Complex, Galore, Vogue, and more, so it's a good idea to follow along her rising career.

The Bristol-born stylist is Jorja Smith's right hand, a predominant leader in London's street style crowd, and recently styled DaBaby's cover for Wave Magazine wearing Ace Boyz. She's already been recognized by the likes of Vogue and Complex so follow along to watch her meteoric rise.

Scot Louie is a stylist to the stars; his lengthy clientele includes but is certainly not limited to Kehlani, Ryan Destiny, and Keke Palmer. Besides his editorial and red carpet work, he's also delved into video and advertising with a campaign for Pony.

Kimani earned much buzz as Issa Rae's stylist and the costume designer on HBO's Insecure from 2016 to 2018, but the rest of her resume reads just as impressively. The new mother also worked on Jay Z's film Family Feud, styled Tiffany Haddish's numerous costumes for the 2018 MTV Movie Awards, and is now heading up design for Season 4 of Queen Sugar (a series produced by Oprah Winfrey) on top of currently working on the in-production series Council of Dads.

United as business partners since 2013, Wayman Bannerman and Micah McDonald are an unstoppable force. Regina King, Tessa Thompson, and Logan Laurice are just a few of the celebs on the duo's expansive working list. Unforgettable moments include Thompson's leather and lace Met Gala look from 2019.

Boothe's sharp eye and futuristic taste is what keeps him ahead of the rest in the styling game. His editorial repertoire features a few cover stories (like Wonderland's mesmerizing live cover from the Winter 2019/2020 issue, below) and includes artists like Rich the Kid and Juice Wrld. His red carpet dressing is just as strong, repeatedly dressing Diplo and Jeremy Pope from Netflix's Hollywood as just a few examples.

With three years' experience on the celebrity stylist Law Roach's team behind him, it didn't take Kollin Carter long to establish his own name in the industry. After first styling Cardi B's Fader cover, the duo quickly became a sartorial force. Carter is behind some of her most of her iconic style moments, including her touring, music videos, court-side, street style, and even both of her historic Met looks from 2018's Heavenly Bodies gala and 2019's Camp extravaganza. Leading ladies like Kelly Rowland, Naomi Campbell, and Normani are just a few of his loyal clientele.

Gabriella Karefa-Johnson is an editorial stylist with an eye for color and texture. She worked with Vogue's Tonne Goodman and is currently the fashion director at Garage. There is no shortage of wow-worthy projects she's worked on like Kendall Jenner's Garage cover and the Wall Street Journal's Innovator Issue, in which she styled Melina Matsoukas and Tyler the Creator.

As High Snobiety's fashion director, the innovator is amping up generation-defining style and boundary-pushing content. His cover history includes Dan Levy for Out Magazine's 'The Fashion Issue', Complex's cover featuring Kid Cudi and Nigo, and plenty more editorial moments you can find on his Instagram.

Previously the fashion editor at Out, Simmons is currently the style editor for Hearst Fashion Group but has lent his talents at Elle, Bazaar, and Allure. He works closely with big brands to style editorial campaigns such as Nike, DKNY, Uniqlo, and more.