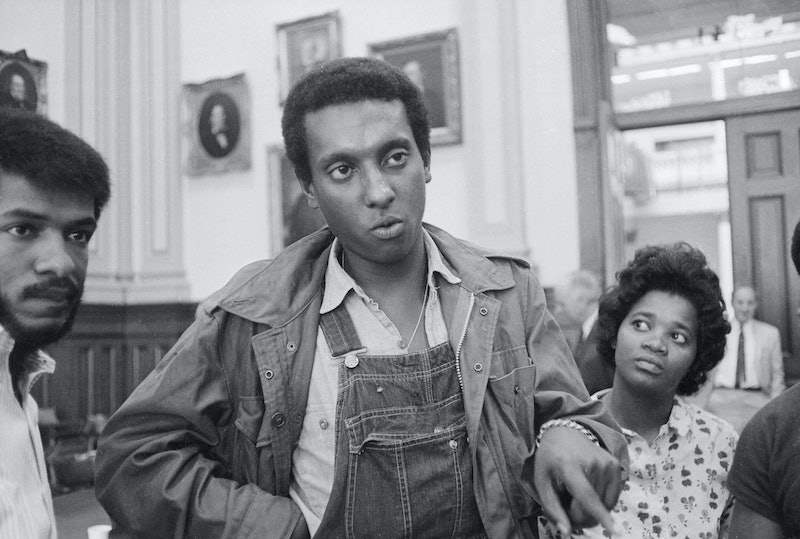 From gold miners of the late 1800s to cowboys of the 1930s, denim has long been the fabric of choice for the rugged and mysterious. Just think of James Dean in Rebel Without a Cause. Be they skinny, acid wash, or boot cut — blue jeans are thought of as the core of American fashion. Like America, denim is hard-working and practical (Rosie the Riveter’s World War II denim jumpsuit), sexy and approachable (Brooke Shields' ubiquitous Calvin Klein ads), yet it also is revolutionary. Because, in fact, the history of denim is also rooted in Black activism.

In 2020, the effects of the Black Lives Matter movement have been uniquely felt in the fashion industry where representation is often lacking, appropriation dismissed, and attribution white-washed. Examining the Black contribution to fashion, usually begins and ends with streetwear and hip hop culture. Rarely, is attention turned to Black participation in shaping universal style beyond urban fashion.

But, what does this all have to do with slipping on a pair of 501s? A lot, actually. “Denim represented an ode to the African American experience,” says Darnell-Jamal Lisby, a fashion historian and curator. In fact, when you chart how denim transitioned from its early workwear incarnation to wardrobe essential, you will find that it intertwines seamlessly with the Black experience. And, moreover, it was Black activism that helped make the concept of the everyday jean mainstream.

“Denim being perceived as a ‘raceless’ symbol of Americana is a product of white supremacist revisionist history,” offered Jannah Handy co-founder and curator of BLK MKT Vintage, a collection that represents the richness of Black history and culture. “So much of what we define as ‘Americana’ was created, made possible, innovated, seasoned, made popular by Black people and rebranded ... denim falls under that umbrella and I think it’s important to examine the context,” explains Kiyanna Stewart, co-founder and curator of BLK MKT Vintage.

The History Of Denim And Black Activism: Not Your Mother's Jeans

As denim made the great leap from its humble beginnings to runway staple, its significance in the civil rights movement is especially overlooked. “Slave owners bought denim for their enslaved workers, partly because the material was sturdy," explains fashion history writer Marlen Komar in an article for Racked. "And partly because it helped contrast them against the linen suits and lace parasols of plantation families.” With this in mind, denim — namely, overalls, blue jeans, and trucker jackets — became a not-so-subtle sartorial reference to slavery during the 1960s.

Youth activists, specifically members of SNCC (Student Non-Violent Coordinating Committee) used denim as an equalizer between the sexes and an identifier between social classes that would create space between their work and other factions of the civil rights movement. “Denim served not only as a rebellious uniform to the culture of the middle class activists, but also as a soul tie to the Black laborers,” offers Miko Underwood, sustainable denim designer, historian, and founder of Oak & Acorn. “The significance of the SNCC denim uniform or ‘SNCC skin’ served to connect with and advocate for the Southern Black sharecroppers. In adopting the clothing of Black laborers, instead of the attire worn by the Black middle class, SNCC was consciously reevaluating the politics of respectability.”

Crisp suiting, narrow ties, and Macintosh coats are what comes to mind when most of us think of images of the civil rights movement. But the fashion was fractured very deliberately. “For Martin Luther King Jr. and activists who represented the non-violent side of the movement clothing, was a notion of assimilation,” explained Dr. Joanne Martin, founder of The National Great Blacks in Wax Museum in Baltimore, MD. “This contrast that you’re marching and coming up against attack dogs and water cannon to show that you are acceptable and worthy of civil rights.”

But denim represented a different school of thought, “The idea that you didn’t have to prove yourself to white society manifested in a lot of ways after Black activists outfitted themselves in denim," Martin continued. "Much like with the mini [skirt] and fighting the patriarchy.” From antiwar protests to hippie culture and the struggle for women’s rights, denim as a political statement was now woven into the anti-establishment spirit of America.

The History Of Denim And Black Activism: Blaxpoitation and Bell Bottoms

In the ‘70s, Blaxpoitation films like SuperFly and Foxy Brown propelled denim styling forward with brash, over-the-top silhouettes and embellishments. “In Blaxploitation film culture, denim continues to serve as the voice of the youth and revolutionary ideology,” offers Underwood. “Denim becomes more stylized. Old quilting and patched denim are fashioned as tailored blazers, trucker jackets and pants and colorful embroideries elevate denim.” But mainly, things got a whole lot sexier. While the link between denim and the Black experience became more faint in the public eye, it remained the basis of an upcoming style revolution.

The History Of Denim And Black Activism: A Seat At The Table

“In the 1980’s and 1990’s, we experienced the pendulum swing on economic and gender conservatism within Black communities,” explains Handy. “Denim, once again, is the landscape where politics and ideology is articulated.” Jeans were so synonymous with freedom during the Cold War that Soviet smuggling of American denim was practically a punchline. But with the ‘80s and ‘90s also came hip hop and rap, two transformative styles not just in music but also in fashion. Jeans got baggier, cuts were more masculine and unapologetically oversized, and beneath all that were clear ties to denim’s early activist days.

“During this period, denim in the Black community represented a form of protest once again,” explains Lisby. “But the difference is that there was an intention for these styles to be a part of the mainstream. During the 1960s and 1970s, those involved in Civil Rights and wore denim were not trying to inspire mainstream fashion but actually execute quite the opposite.” In the '80s and '90s, however, we wanted a seat at the table and were prepared to use the same fabrications — cotton and denim — that were associated with oppression to do so.

It’s no coincidence that brands like FUBU, Enyce, Karl Kani, and Cross Colors found their start in denim — not just because of the global need, but also because of its significance in the Black community. One of the most obvious examples being urban wear pioneer April Walker’s Walker Wear “Rough and Rugged” denim suit. By design, the larger-than-life denim set flashed contrast stitching, elongated crotches, oversized pockets, and a bootleg with just enough slack to fit over Timberlands. But, there are touches of SNCC-era shapes and callbacks to sharecropping that cannot go unnoticed.

The History Of Denim And Black Activism: Runway-Ready Blues

Fashion obsessives can easily point to the late ‘90s and early 2000s as a moment when denim surpassed the everyday to reach runway-ready status. Low-slung hip-huggers and jeans with four-figure price tags became the undoing of many a bank account. But the glamorization of the humble material would not have been possible without Black designers like Willi Smith and Patrick Kelly.

These often forgotten pioneers of American sportswear used denim as a connective tissue between generations, ultimately elevating the material to a level of prestige. Kelly with his flouncy blazers and playful overalls and Smith with his wearable art and love affair with re-imagined denim. "When we think about contemporary streetwear, there were several paths to how it came to be," explains Lisby. "One way was hip-hop — another was through Willi Smith. Similar to SNCC, he saw the functionality of denim ... as a portal to modernizing sportswear." If only he knew how right he was and how grateful future generations would be.