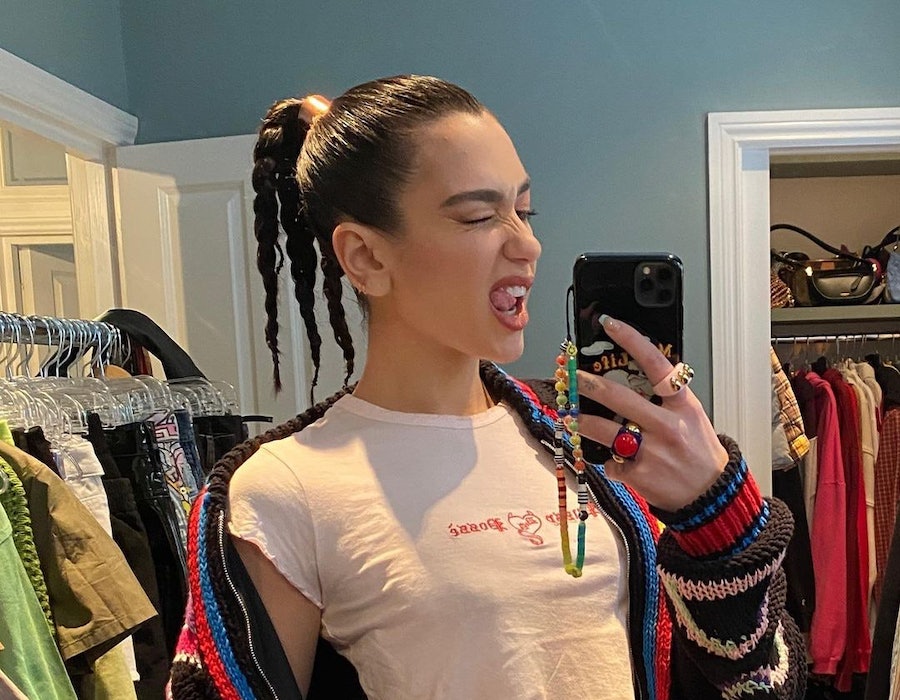 For those who reminiscence fondly over the bejeweled butterflies and dangling hearts charms that once adorned your old flip phones, the current beaded phone charm trend started by String Ting will make your nostalgic, kitsch-loving heart very happy. If you’ve yet to notice the unconventional techcessory’s (yes, that’s a word I just made up) resurgence, take a gander at Dua Lipa’s Instagram feed or Gigi Hadid’s recent street style looks — the beaded String Ting attachments fastened to their phones are hard to miss. However, unlike the decorative extensions from your youth that resembled crafts made at summer camp, String Ting’s phone charms have a more modern look and a renewed practical function.

Founded by Rachel Steed-Middleton during the early days of the pandemic, the London-based brand started as a happy accident. “I wanted to teach my daughter and step-children about giving back, so we set up a stand in our development and sold custom beaded bracelets to our neighbors and friends for charity,” Steed-Middleton tells TZR. With beads on the brain, Steed-Middleton began to reflect. “I was thinking, ‘Wouldn’t it be so fabulous that when the world opens up and you want to go out, you’ve got this accouterment to your phone that really becomes part of your outfit? And you can change your straps like you change your bag or your mood?’”

String Ting’s candy-colored strands have a nostalgic spirit that harkens back to the early aughts, but Steed-Middleton emphasizes that the accessory brand has evolved purely beyond just an ornamental aspect. “Phones back then did not have the function and utility that they do today. We had little charms off our Nokias and holsters for our pagers, but [String Ting’s phone straps] are actually a different way to carry your phone,” says Steed-Middleton. Her beaded straps — options include strands of blue evil eyes, heishi-style slivers, and chunky hearts that come in either wristlets or a crossbody style — give your phone a handle that transforms your device into a fabulous, purse-like accessory. “I get so many messages from my clients saying, ‘How was I carrying my phone before?!’ They are weirdly necessary.”

Celebrities also agree that String Ting’s luxe phone straps are must-haves. Singer Dua Lipa was the first star to fall in love with the childlike accessory back in Nov. 2020 (her Grammy-winning album is called Future Nostalgia, so it’s clear she loves a good throwback) and it all sparked from one Instagram DM. “I just messaged [Lipa], and she responded,” laughs Steed-Middleton. The 37-year-old designer sent Lipa the Night Garden In Pink wristlet, and now the bright beads pop up in nearly every mirror selfie the pop star posts. After Lipa, it was a quick, beaded chain reaction: stars like Kaia Gerber, Gigi Hadid, Miley Cyrus, and Kendall Jenner have since joined the String Ting fan club. Hadid loves her Night Garden wristlet, and Gerber can frequently be spotted strolling around Los Angeles with her To The Moon and Back strap around her wrist. Jenner, however, loves the luxe Jolly Rancher wristlet, which is made of rainbow-colored Swarovski beads that resemble the candy it’s named after.

At first thought, the redemption arc of phone charms in 2021 may seem out of place. But in the company of fellow throwback fashion trends such as chunky maximalist rings and baby tees, the comeback of dangling phone decorations tracks with a larger cultural regression back into childlike fads. After a full year of pandemic-related uncertainty, “everybody just wants something familiar, happy, optimistic, and comforting,” says Steed-Middleton. String Ting fills this desire and then some. “When there’s something that’s kind of youthful, it feels friendly,” says the designer. “I know they’re just phone extensions, but they’re sort of oddly joyful. It’s like a little object that brings a spot of happiness.” In hearing Steed-Middleton talk about her bespoke process of drilling into the beads and carefully stringing them together, it’s evident they’re truly made with love. “They come from the heart. I know that sounds silly, but it’s really true — I really care about them,” she says.

Ahead, you’ll find other celebs carrying String Ting charms, as well as beaded phone straps from the label to shop that includes Lipa and Jenner’s exact pieces. While the attachments can be secured to any case, Steed-Middleton recommends styling yours with a case from Wildflower Cases (co-founders and sisters Devon and Sydney Carlson are also massive String Ting fans).