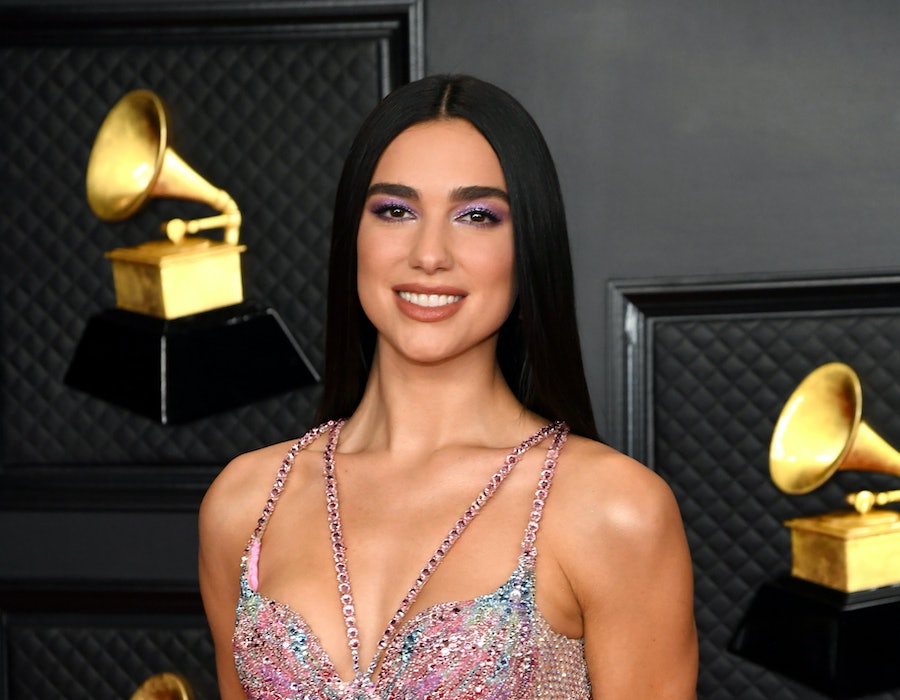 The red carpet at the 63rd Annual Grammy Awards didn’t have as many celebrities this year due to social distancing, but for those who were able to show up — they dressed up. One of the stars who added glamour to the night in person was musician Dua Lipa. The pop star was one of the few major celebs who walked the Grammys red carpet. Lipa, in a butterfly motif dress from Atelier Versace, dropped by to speak with E!'s Giuliana Rancic before performing on stage. The singer told the host that she selected the designer number for tonight because “there was a lot of symbolism for [her] this year with butterflies and it’s also very symbolic for Versace and Donatella.” Past celebs who have also referenced butterflies in their outfits at the Grammys include Cher (in 1974) and Christina Aguilera (in 2000, where she also wore a Versace number when she took home the Best New Artist award).

For those wondering where exactly the butterfly design was located, push your phone (or computer) screens away and you’ll see the insect was outlined in embroidered crystals and jewels on the front of her strappy gown. In addition to the dazzling design, the dress featured several alluring details such as side cutouts and a thigh-high slit, which showed off her equally sparkly heels. This glistening cutout gown was right in line with Lipa’s fashion aesthetics for barely there dresses. The performer accessorized her red carpet look with BVLGARI jewels, ANANYA Scatter rings, and a Spinelli Kilcollin Delphinius Rouge Ring for the complete red carpet package. Lipa, who is nominated six times tonight, didn’t have to stay in this outfit for long though, as she slipped into a sequin hot pink number for her on-stage performance later that night.