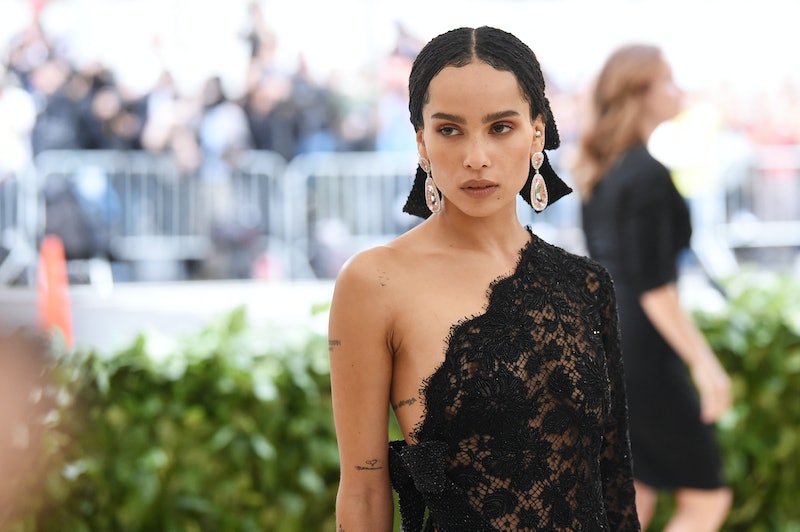 Despite how many people ordered PSLs in the coffee line this morning, summer isn't over for another few weeks — so don't you dare say differently — which leaves plenty of time to get your hands on the adorable gingham dress Zoe Kravitz is wearing. Believe it or not, this timeless July staple is one your fall wardrobe could use, too.

When you see a woven cotton like the one featured on Kravitz's latest Instagram photo, memories of picnics in the park and Dorothy Gale singing "Over the Rainbow" might come to mind. It's a classic summer print that'll surely never go out of style, not to mention it's incredibly versatile.

Emma Roberts incorporates it into her retro aesthetic often, whereas Jennifer Garner makes it look so girl-next-door. When Zoë Kravitz wears gingham, though, it somehow becomes very bohemian rocker chic, if there is such a thing.

The Big Little Lies actor posted a photo of her walking hand-in-hand with her godson wearing a button-down dress in purple check print by HVN. Cinched at the waist, the flowy frock is fitted but still airy. Kravitz wore it with a pair of carefree woven slides and a green handbag that contrasted the purple effortlessly well.

Daughter of rock legend Lenny Kravitz and bohemian queen Lisa Bonet, the 30-year-old has seemingly adopted each of her parents' styles equally. She let one of the straps fall on her shoulder lazily and hung her sunglasses on the square neckline of the dress like the laidback gypsy she is.

Knowing Kravitz, she'll probably wear the dress into fall, perhaps with combat boots or a leather moto jacket for a touch of edge. You could also layer it over one of your basic tees and pair it with your white sneaks for extra warmth next season.

Snag the actor's dress while it's 40 percent off, ahead.

The best thing about buying a summer print at the end of the season is that they're all majorly on sale. The second best thing is being able to wear them throughout fall.

Speaking of autumn-appropriate gingham: This black-and-white tiered midi is so transitional and versatile. Pair it over your tees, under your jackets, or with your favorite chunky boots.

Go bold with your gingham and opt for this super-trendy bright-green hue.