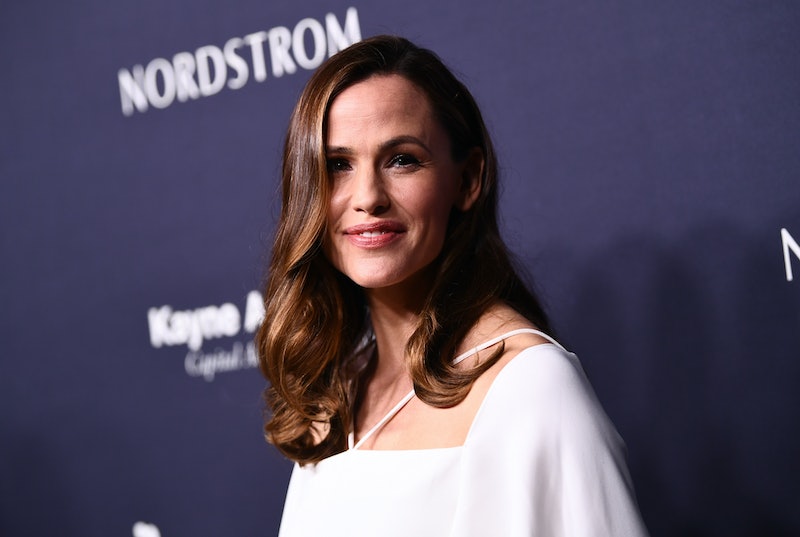 Animal prints of all kind are still very big this season — Kendall Jenner and Bella Hadid, for example, have been playing favorites with leopard spots as of late. And botanical motifs are a no-brainer once springtime rolls around. But, there's one pattern, in particular, that simply screams summer more than any other. Dare to take a guess? That's right, gingham is the quintessential warm-weather print. Mix that with a classic summertime silhouette, and you have Jennifer Garner's gingham dress, which is about as summer as it gets. In other words, the time to scoop up the checkered frock is officially now.

The 47-year-old certainly loves her ultra-comfy leggings, snug hoodies, and sneakers when she's off-duty. But when she's attending any sort of major event, Garner typically tends to lean toward timeless staples — with a twist. Such was the case when she stepped out for the Forbes Women's Summit on June 18 in New York City. There, the actor and entrepreneur took the stage to talk about her decision to launch Once Upon a Farm, an organic-food company that makes cold-pressed baby food, as well as smoothies and applesauce for kids.

For the occasion, Garner opted for an inherently classic ensemble, consisting of a black-and-white checkered Alexander McQueen frock. The dress, which featured of-the-moment puff sleeves (the aforementioned twist) and a box-pleated round neckline, was the epitome of summer style. Just take a look at it for yourself if you need more convincing.

Garner teamed the elegant dress with black patent leather power pumps, which infused the ensemble with a welcomed dose of sophistication. The actor isn't typically one to go overboard with accessories, so it should come as no surprise she forwent a handbag, belt, or earrings for Tues.'s event. The only touch of sparkle came from a diamond ring on her right hand.

The beauty of a gingham dress lies in its versatility. Garner took a slightly dressier route when it came time to styling hers, but you can swiftly make it feel more casual by trading in the heels for lace-up espadrilles. Add in a straw bag (perhaps the Jacquemus tote Chrissy Teigen loves) and sunglasses, and you have a quintessential summer outfit you can wear, well, anywhere.

Inspired to add a gingham dress to your lineup? Do so with The Zoe Report's roundup of the best checkered frocks on the market. Shop the styles, below.

This easygoing gingham dress is designed with playful, '80s-inspired puff sleeves that are so on-trend for summer 2019. Style it with sneakers, heels, or sandals.

Find a more classic gingham dress (hint: there isn't one). This perfect Rachel Roy Collection frock has buttons down the front, a smocked back, a full skirt, and a waist tie.

The sweetest summer dress there ever was — and for a reasonable $60 at that. Add in poppy red cat-eye frames and equally-bold wedges for your next beachside picnic.

Black-and-white checks will always be a classic, but this frock takes the color combo up a notch by adding an orange gingham print on the sleeves.