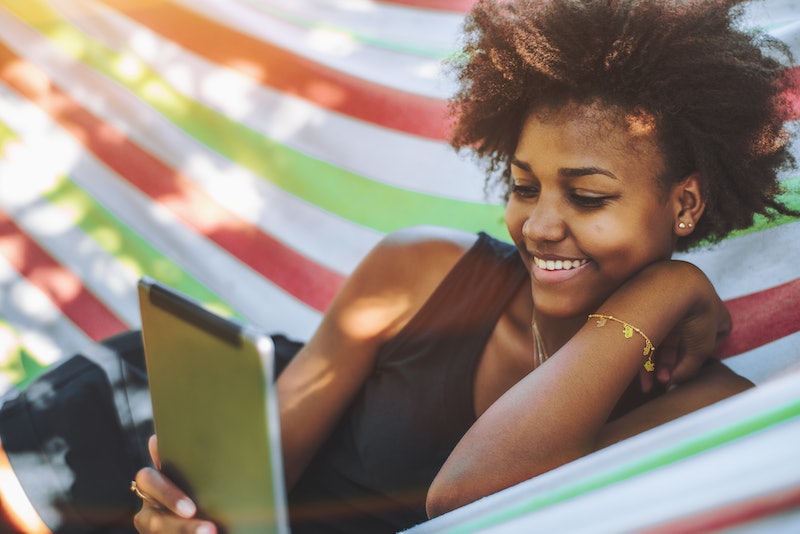 There are a few essentials that always come in handy when you're headed to the beach (or a pool, for that matter): a flattering suit that won't come off if you actually plan on getting in the water, sunblock of SPF 30 or higher to avoid getting burned, a coverup that's cute enough to wear wherever you're headed, water to keep you hydrated, and, of course, something juicy to read. The perfect summer beach read means something different to everyone — whether it's your go-to gossip mag (no shame in your game) or some hard-hitting non-fiction. But those that are ideal for summer specifically have one thing in common: They keep you excitedly flipping the pages no matter what your plans entail.

Whether the next couple of months involve working from wherever you are, glamping, luxuriating in an all-inclusive resort, or even just kicking back on your newly upgraded patio, you're going to want something good to read along the way (especially true if you've got an awkward family vacation in the works). That said, if you're still looking for suggestions for which books to toss in your bag this summer, who better to ask than some writers and editors who work with words for a living? Ahead, find 12 selections — from cookbooks to so-called "chic lit" — that should be contenders for your next read, as suggested by those in the know.

Watch Me: A Memoir by Anjelica Huston

"Although I read her memoir last year, I'm giving Anjelica Huston's book Watch Me another pass this summer — it's that good. The actor gives an honest and candid retelling of the time in which she started to really make a name for herself in film, and when she started her long-standing and torrid love affair with Jack Nicholson. The writing is so conversational, it's like Huston is sitting at a table telling you her story over a glass of wine. It's a must-read for pop-culture lovers." — Angela Melero, Senior West Coast Editor, The Zoe Report

The Seven Husbands Of Evelyn Hugo by Taylor Jenkins Reid

"OK, this pick is technically fiction. However, the writer, Taylor Jenkins Reid, took inspiration from the memoir of Old Hollywood actor Ava Gardner (as well as other stars of yore) in this incredible tale about the realities of the female — and human — experience in Hollywood in the 1940s. The Seven Husbands Of Evelyn Hugo has everything: love, scandal, drama, and an incredible plot twist at the end you definitely didn't see coming. If you want a book that delivers the ultimate escape, this is it." — Angela Melero, Senior West Coast Editor, The Zoe Report

"Right now, I'm reading Olivia Lopez's Lust for Los Angeles, which is a captivating visual love letter to LA that's compelling even for those, like me, who don't necessarily love LA. Though it serves well as a coffee table book, the eye candy goes well beyond the cover: Lopez recommends and beautifully captures the best corners of the city spanning shopping, restaurants, and even architectural gems." — Lauren Caruso, Site Director, The Zoe Report

"I can't recommend Adam Katz Sinding's Live From F*cking Everywhere enough. It's a compilation of the renowned street style photographer's best images from around the world. Though he's based in Cophenhagen and had focused on the fashion world for much of his career — you can check out his first book, This is Not a F*cking Street Style Book, for more on that — his latest release takes a more culture-heavy POV with a slant toward the oft-overlooked in-between moments of travel. I also appreciate his appreciation of a well-timed expletive." — Lauren Caruso, Site Director, The Zoe Report

"I've got a couple things on my book list — it's a lofty goal with my schedule but I'm determined! The first is City On Fire by Garth Risk Hallberg; he happens to be my cousin's husband and it's been on my list for a while. I'm also hoping to read Look Alive Out There by Sloane Crosley — I read I Was Told There'd Be Cake and fell in love with her writing. And finally re-reading Cooking For Mr. Latte by Amanda Hesser — I started this years ago and then forgot to finish it because I was reading a few other things at the same time, but I love the way Hess (the co-founder to Food52) documents her courtship with her now-husband and how memories are associated with food." — Dale Arden Chong, freelance fashion writer and editor

Fleishman Is In Trouble by Taffy Brodesser-Akner

"I just finished Fleishman Is In Trouble, a debut novel by one of my favorite journalists, Taffy Brodesser-Akner. It's a book about a couple who's divorcing, but I swear it's not a total bummer. I also can't wait to get my hands on E. Jean Carroll's What Do We Need Men For? She's the genius behind ELLE's epic advice column, and there's literally no one on planet Earth with a wit like Auntie Eeeee." — Julie Vadnal, writer and creator of JULES newsletter

Becoming Supernatural: How Common People Are Doing the Uncommon by Dr. Joe Dispenza

"I’m going to read Becoming Supernatural this summer. I discovered Dr. Joe Dispenza’s work through a conversation with Elise Loehnen on the Goop podcast. The researcher and author completely blew me away, not only with his palpable passion for his work (you could feel it through the speakers) but for the real change and energy shift that people are experiencing through the practice. His work is focused on retraining the brain to tune into frequencies beyond our material world and that really interests me. Ever since listening to Esther Hicks tapes on the Law of Attraction, I’ve been more aware of my energy and actively manifesting the life I want, welcoming abundance, good health, and prosperity and it works — but it is a daily practice." — Sacha Strebe, Editorial Director, Create & Cultivate

Amazon
Becoming Supernatural: How Common People Are Doing the Uncommon
$15.56

"If I'm not reading a copy of the latest fullest issue, my go-to beach read involves a good cookbook! It’s similar to a magazine in the way that it doesn’t require too much brain power, but also inspires me to get creative. Some all time favorite cookbooks of mine include the Sweet Laurel Bakery cookbook, And High Vibrational Beauty from CAP Beauty." — Nikki Boswick, founder and Editor-In-Chief of the fullest

Something Borrowed by Emily Giffin

"Call me corny, but when it comes to beach reads, I'm a fan of breezy chick lit. Emily Giffin writes a juicy story, and I loved diving into the drama of Something Borrowed, which is about a woman who has an affair with her best friend's fiancé." — Karen Tietjen, freelance writer and editor

The Anatomy of Dreams by Chloe Benjamin

"I tear through content — I love reading and listening to audiobooks. Usually I'm more of a non-fiction reader (Atomic Habits was my favorite read last year and it literally has changed my life and business), but during the summer there's something about reading fiction that just gets me. This summer I'm reading The Anatomy of Dreams by Chloe Benjamin, because I loved her book The Immortalists." — Michelle Pellizzon, freelance writer and editor and founder of holisticism

"Apparently I was the last to get on board with this contemporary novel that came out last year but I'm so glad I eventually caught wind of it. It's a perfect beach or vacation read because it's a total page-turner — it keeps you invested in the characters, who are flawed but lovable and completely relatable. It's also a classic love story at heart, so there's that." — Ashley Tibbits, writer and editor

Slouching Towards Bethlehem by Joan Didion

"I only read my first Didion last year, A Year Of Magical Thinking. It was so incredible I made it a mission to try and read everything of hers. A book of essays or short stories is always a great option for summer because there are built-in stopping points, so right now I'm working on this one, which catalogs the writer's essays about California in the 1960s — so inherently it has a quintessential summer feel about it." — Ashley Tibbits, writer and editor