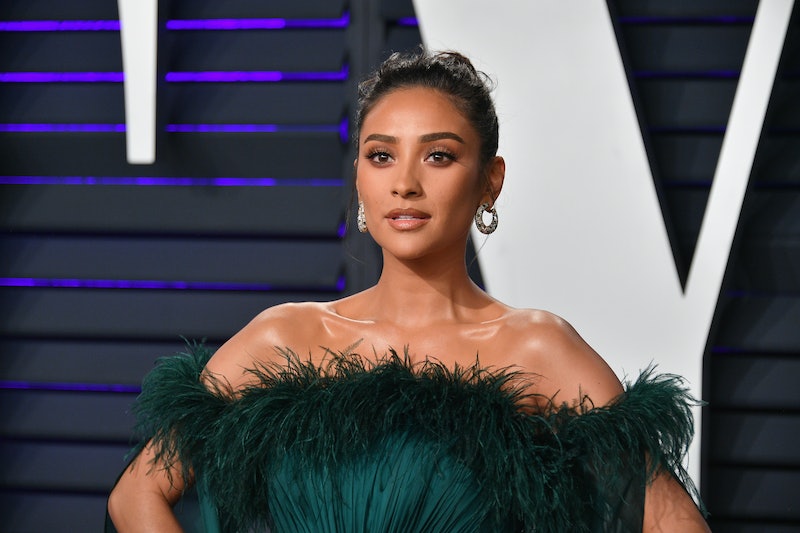 Up there with little black dresses and red lipstick is white nail polish. It's a classic that can't be bound to any one season or trend, and many celebrities are unsurprisingly fans of its versatility. Shay Mitchell is one star in particular who has made this color one of her signature shades, this summer being no exception. Making a reappearance this week was Shay Mitchell's white nail polish, which showed up in several pictures she posted on social media.

On Aug. 17, the actor shared a series of videos and pictures on her Instagram stories of her rocking a white manicure while doing everything from working out at the gym to eating a donut. The opaque, cloud-like color was painted onto square-tipped nails, and while she's worn it on several occasions throughout the week, it was especially stylish when she paired it with a pink floral dress and brown retro sunglasses.

A white mani has been a popular choice for Mitchell for years, and the lengthy list of times she's worn it includes Patrick Ta's makeup launch last spring, photoshoots with Lulu's and Béis, Grammy's after parties, her pregnancy announcement, and all last summer, too. It's easy to see why this would be such a go-to for Mitchell, among other celebs, as the shade not only serves as a neutral, but because of its bright glow, it also works as a statement nail — one that doesn't require any fancy designs, finishes, or expert skills.

Save for a small handful, most nail polish lines have left white out of their summer and fall collections this year, but even still, many stars are continuing to dip their brushes into this hue. Aside from Mitchell bringing this color back into her own rotation, Rihanna tested out the shade in the form of a pedicure in late July and Olivia Culpo has been rocking a white mani all summer long.

It's obviously a brilliant summertime pick, but to prove the validity of its timeless appeal, you only have to look back to winter and spring, where celebrities like Selena Gomez and Kylie Jenner were captured wearing a bright coat of snowy lacquer, too.

A few similar shades for you to recreate the look yourself, ahead.