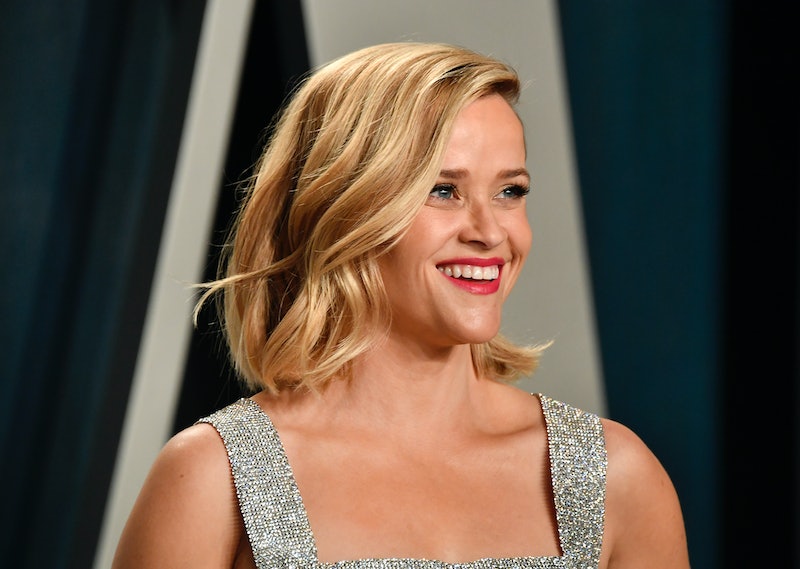 Virtual awards shows have become a strange subset of entertainment amid the pandemic, with Instagram reveals standing in for red carpets and statuettes being delivered to nominees' doors by men in hazmat suits. On Sunday, the amusement resumed with dozens of A-listers dressed to the nines, broadcasting from their own living rooms. Despite the odd circumstances, the ever-graceful Reese Witherspoon pulled off a 2020 Emmy Awards beauty look for the books — not least because of how inexpensive it was.

Little Fires Everywhere nominees Witherspoon and Kerry Washington brought a lot of joy to the peculiar ceremony by tuning in from an early New Year's Eve party. "We're ready for this year to be over," the 44-year-old producer told host Jimmy Kimmel with a glass of champs in hand. Even with a pair of disposable 2021 glasses on, the actor clearly gleamed in characteristically subtle makeup and a bright red lip.

According to her makeup artist, Kelsey Deenihan, the products behind Witherspoon's noticeably quenched complexion cost only $55 in total. Deenihan used The Inkey List, a refreshingly simplistic and affordable skincare brand rooted in high-quality ingredients, before arming the actor with a neutral eye (courtesy of Pat McGrath Labs' upcoming MTHRSHP MEGA Celestial Divinity palette) and a MatteTrance-created red lip.

According to a press release, Deenihan first prepped and treated Witherspoon's skin with The Inkey List's moisture-locking Hyaluronic Acid ($7.99) — a "holy grail" ingredient for hydrating and plumping skin, according to the makeup artist.

Then, she applied the squalane-spiked Q10 Antioxidant Serum ($6.99), which protects against free radicals — a bonus, Deenihan says, "with the current poor air quality on the West Coast." Next came the collagen-supporting Peptide Moisturizer ($14.99) and a swipe of Caffeine Eye Cream ($9.99) under the eyes, reducing puffiness and preventing concealer from creasing.

The final step before makeup was The Inkey List's Polyglutamic Acid Hydrating Serum ($14.99), a makeshift primer over which her Skin Fetish Sublime Perfection Foundation was able to glide smoothly.

All bear the Clean at Sephora stamp and are available for less than $15 apiece. Shop Witherspoon's entire Emmy Awards skincare routine, ahead.