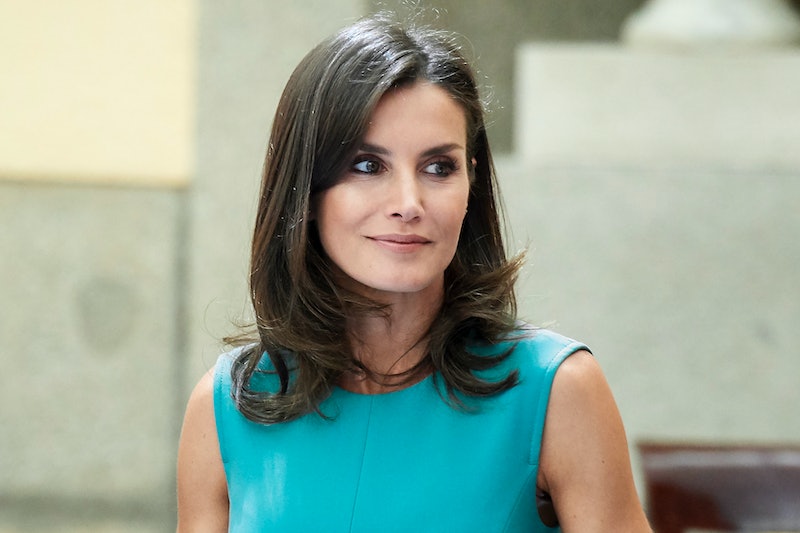 Spain's queen has been on a serious style streak — but then again, when is she not? The royal always puts a fashionable foot forward, infusing many of her off (and on-duty) looks with pieces that are either incredibly affordable, recycled from previous outings, or all of the above. That said, Her Majesty is no stranger to an outfit repeat, and while you might think the striped midi dress Queen Letizia wore for a recent night out is, in fact, a repeat, it's not. It just looks very similar to a frock she wore a few weeks back.

Letizia loves a good Zara find; she frequently sports head-to-toe red; and she's rarely spotted without a belt around her waist. These details have become signatures of the queen's sartorial moments, and as it turns out, there one more thing to add to the list: Her Majesty's affinity for striped, accordion- style dresses.

On Aug. 2, Letizia, her two children, Leonor and Sofia, and her mother-in-law, Queen Sofia, were photographed leaving the Auditorium of Palma de Mallorca, after attending a showing of the 'El Lago de los Cisnes' ballet. The princesses were dressed in quintessential summer staples, while Queen Letizia took an extra-elegant approach for the evening on the town.

The royal stunned in a black-and-white striped midi dress by Carolina Herrera. It was rendered in a stretch-knit fabric, which offered up comfort and movement, and features thin spaghetti straps and an accordion-style skirt that swayed as she walked. Simply stunning.

Letizia has long mastered the art of accessorizing. For the Fri. evening outing, she carried a black leather clutch, grounding the ensemble with a pair of Manolo Blahnik PVC pumps. (She's known to be a fan of the naked shoe trend, too).

As per usual, her hair was styled in shiny, bouncy waves, with a smoky eye and a swipe of lip gloss rounding out her chic evening beauty look with ease.

If the past is an indication, you can expect to see Letizia in many more black-and-white striped dresses, particularly because two of her go-to designers, Carolina Herrera and Hugo Boss, frequently release frocks covered in the classic motif.

Queen Letizia's exact dresses are now sold out, but The Zoe Report found some great alternatives. Shop them all, below.

This dress would seamlessly fit into Letizia's wardrobe. She'd probably wear it with sleek black pumps and a clutch.

Step up your workwear game by adding this stunning pleated dress into your lineup. Letizia would, without a doubt, wear this one, too.

This is the perfect date-night dress. Wear it with silver heels and sparkly jewels.

Fall might still be a few weeks away, but it's never too soon to start prepping your wardrobe. This maxi dress is one must-have.

Go sporty by pairing this sleeveless dress with sneakers or make it office-appropriate by slipping into black pumps.