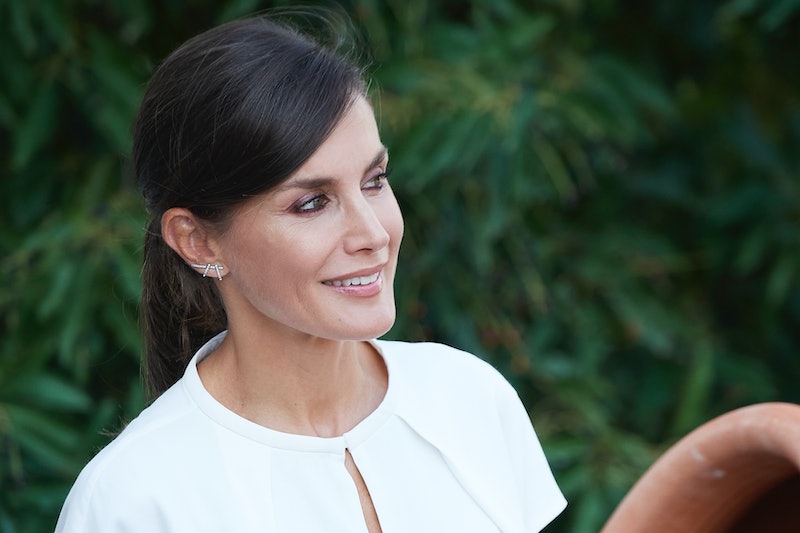 The royal three (aka, the Duchess of Sussex, the Duchess of Cambridge, and Queen Letizia) have been on a serious style streak in recent weeks. Markle is busy acing her royal press tour style whilst in South Africa with Prince Harry. Middleton is gearing up for her own royal tour of Pakistan, attending a slew of events in London (and dishing out one standout getup after the other) prior to boarding the plane with Prince William on Oct. 14. And last but certainly not least is Queen Letizia, and specifically, that two-tone outfit she just wore, which proves that although she knows how to wear poppy colors and bold prints, her sartorial sensibilities really shine in the minimalist department.

It's only day three of Oct., but this month is already showing signs of being one of the most stylish of 2019 — Markle's trench dress, Middleton's teal floor-length frock, and now, Letizia's two-tone look are just three examples that set the fashion world ablaze. But aside from causing some serious buzz, each style moment also offered up an important dressing lesson.

For Letizia's Oct. 3 outing — which included a stop to attend the inauguration of the 14th International Seminar of Language and Journalism 'El Espanol y las Maquinas: Lenguaje, Etica y Periodismo' at the Monastery of Yuso — she reached for two staples every self-proclaimed minimalist should have on hand: black wide-leg trousers and a beige V-neck sweater.

By sticking with a super-subdued color palette of black and beige (read: two tones), which she even continued in her footwear — a pair of pointy toe stilettos that featured a black tip and a neutral suede upper — she really allowed each individual piece to stand on its own.

Considering the fact that this royal is rarely, if ever, spotted out and about without a belt of some kind — i.e., belted dresses are Queen Letizia's signature — it's fitting that she chose to add in the accessory this time around, too.

The key to two-tone dressing? As demonstrated by Letizia, it's imperative to pick colors that complement each other. Black and white is a classic combo (as is black and beige), but if you're feeling a bit more experimental with the shades you're pairing, try combining a pink and red or a pistachio green with a baby blue.

Ahead, The Zoe Report's favorite pieces to ace two-tone dressing, as inspired by Letizia's minimalist look.