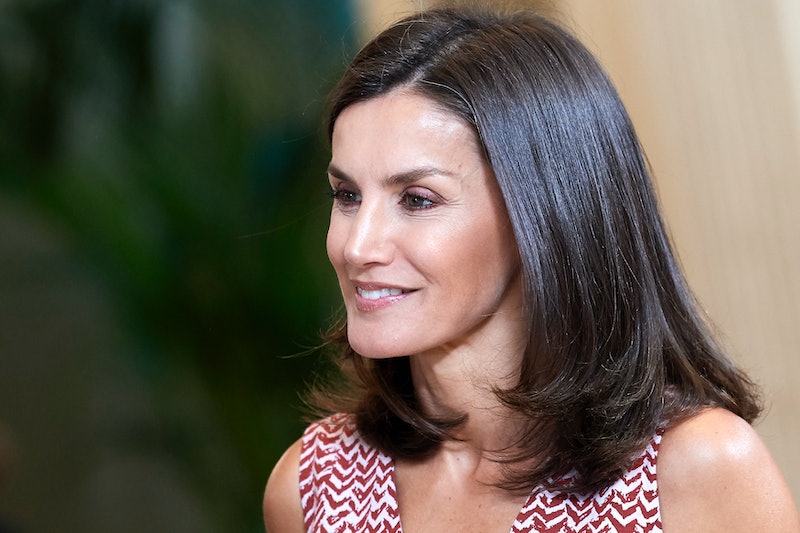 If you've ever wondered what a queen looks like when she's not dressed for royal duty, then you're in luck. A family outing to the cinema offered a rare glimpse of Queen Letizia's off-duty style and, as it turns out, Her Royal Highness has a lot in common with the average budget-conscious commoner. Her aesthetic is refreshingly casual and so affordable, too.

On Thurs., the Spanish royals took a break from the King's Cup Regatta in Palma de Mallorca to catch the new Lion King movie. They've been on the island of Mallorca for a few days now and seemingly decided that they were due for a girls' night out.

Queen Letizia and Queen Sofia, her mother-in-law, escorted Princess Leonor and Infanta Sofia to the cinema, granting a rare glimpse of the royal's ever-chic street style. The Queen was wearing a $100 jumpsuit from Mango and $120 espadrilles (inspired by Kate Middleton?) from her go-to Spanish footwear brand, Uterqüe.

It shouldn't come as too much of a surprise that the queen's off-duty wardrobe is comprised of so many affordable brands. When she isn't dressed in Hugo Boss and Carolina Herrera, she's not opposed to Zara and ASOS. In fact, she's been known to sport those labels rather frequently.

She's professed her love for Mango in the past with checked trousers, an embroidered blazer, and a paisley-print dress. Queen Letizia seems to be particularly partial to the brand's jumpsuit fare, seeing as she's been wearing one in navy for about five years.

Despite marrying into the Spanish royal family, Her Majesty is still a budget-conscious shopper just like the rest of us. Her latest khaki number is still available for $100. It's sleeveless with a wrap-style bodice, a sleek collar, and polished, straight-leg bottoms.

Her woven straw shoulder bag and tied leather espadrilles added a summery touch to the closet staple. Recreate the look with her Mango jumpsuit and others like it, ahead.

Queen Letizia's khaki jumpsuit is made of lightweight linen, making for the perfect summertime all-in-one outfit.

Copy her look with this sleek one piece with a similar spread collar and a self-tie belt for shape.

The trend-forward royal would no doubt approve of this moss-colored faux two piece. It's practically begging to become your summer staple.

Incorporate the utility trend with this rugged workwear-inspired piece. It can be dressed up effortlessly or worn casually.