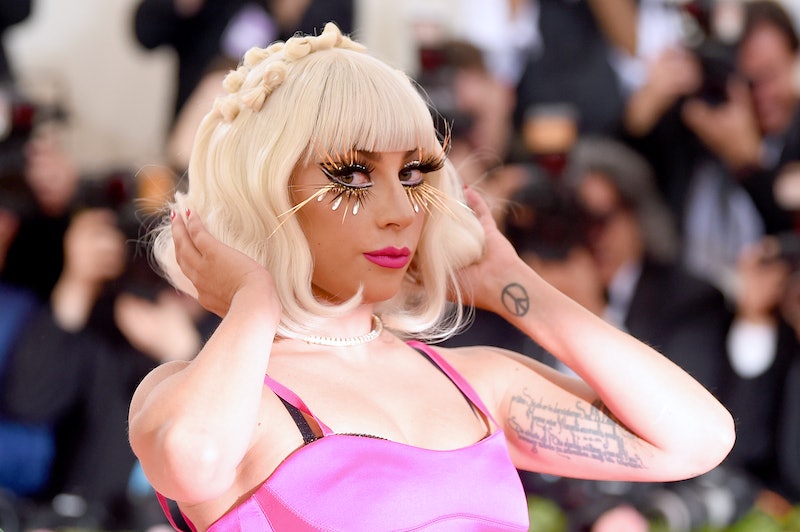 For the past decade, nearly every major Hollywood affair has been dominated by the infamous sartorial choices of Lady Gaga. The meat dress. The Alexander McQueen Armadillo boots. The time she arrived in a literal egg to the 2011 Grammys and was carried down the red carpet by a four-person crew. Even though this year's broadcast was altered by the pandemic, Lady Gaga's 2020 MTV Video Music Awards looks were (unsurprisingly) no less outrageous.

There are many things to note about the singer's VMAs fashion choices — the sky-high shoulder pads, the sequin bodysuit, the green ball gown, the multi-colored number that can only be described as an optical illusion — but there was one standout accessory that could very feasibly become the next big thing. (Not the masks, although fishbowl helmets are now surely trending.)

It was the icy gray hair that cascaded down her campy couture outfits, all the way past her waist. According to hairstylist Frederic Aspiras, love was the inspiration. "All the elements of earth, wind and fire" were incorporated into the spectacle.

"Lady Gaga's journey throughout the years has inspired me to create hairstyles and color combinations that encapsulate this journey," Aspiras said in an emailed press release. "She is tough, brave, a musical genius, a visionary and overall kind human being that believes in love and kindness in the world."

For weeks, Gaga has been teasing her MTV VMAs aesthetic with long aqua locks, then a brief bubblegum pink moment right before the show. But when she stepped onto the reinvented red carpet, it was a cool shade of blue-silver, the perfect accompaniment to her Chromatica-inspired wardrobe.

Aspiras reportedly used a blend of colors (blush, violet pearl, and mermaid blue) to create the iridescent look. After getting the galactic shade(s) just right, he used Joico's Blonde Life Brightening Shampoo, Masque, Conditioner, and Veil before blowing it out into glossy, hip-grazing waves. A few key products that went into it, ahead.