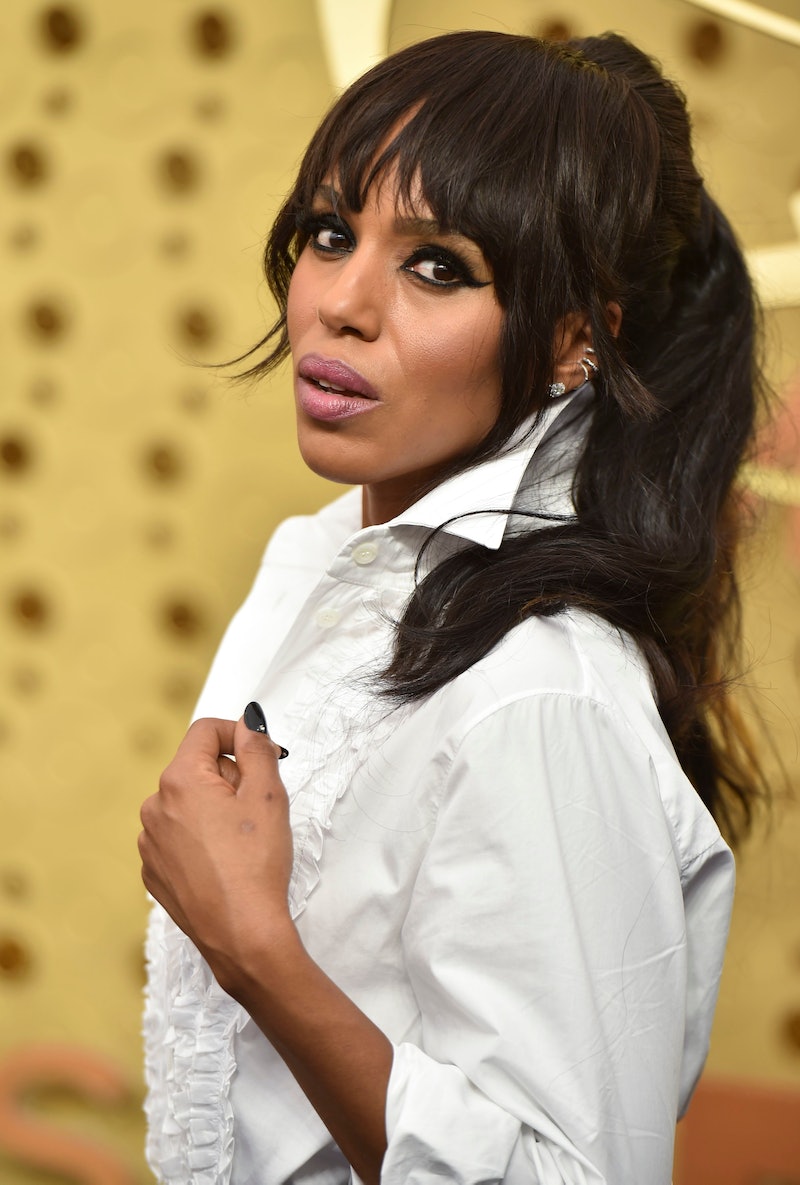 As Scandal's Olivia Pope, she influenced women's fashion in a major way, but in real life, the Kerry Washington's looks have proven to be just as influential — whether she's walking a red carpet or not. That said, at this point, it's a given that she's going to wow at any awards show she attends. And Washington's Emmys 2019 ensemble was yet another one for the books.

Dressed in a ruffled white tuxedo shirt and black sequined pants from Alexandre Vauthier FW19 Couture, Washington put a welcome twist on a classic menswear look. She joins a long list of chic women who have opted to wear pants on the red carpet in lieu of a gown, including Emma Stone, Lady Gaga, and Celine Dion to name a few. But while the elements of Scandal star's look could be considered timeless, she added details to make it feel fresh and effortless — and that includes her glam.

Washington, who was a presenter at this year's show, finished off her ensemble with a messy ponytail with heavy fringe and a kohl-rimmed eye. Even her manicure added a bit of edge, as she opted for short, glossy black tips .

The actress has proven over time that she can rock a high-fashion look — like her campy Tory Burch creation at this year's Met Gala — as well as take on something a bit more casual, like a simple sundress. In other words, she's a trend-setter both on and off the red carpet. And her Emmy's shirt-and-pants combo lands somewhere in between the two, which also makes it a totally accessible option to emulate at your next dressy function.

The beauty of this look (in addition to the points made above), is that it's both accessible and easily recreated the non-celebrity. With the holiday party circuit around the corner, this pants and button-down combo serves as the perfect inspiration for a solid soirée look. If sparkly pants aren't your cup of tea, swap in leather or satin trousers to pair with your blouse. And the Washington's beauty look is easily emulated for any day of the week, no matter the occasion. Just throw up your hair into a pony, swipe on a pinkish nude lip color and line the lids with a kohl liner and you're good to go.

So if you're in need of some fall and winter inspiration for formal wear, look no further than one Kerry Washington and add a bit of blinged-out pants to your wardrobe.