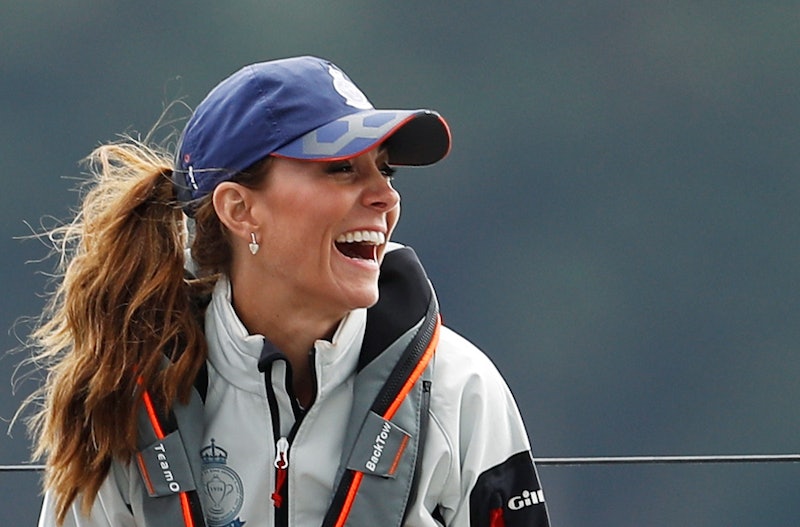 The Cambridge royals are back from their Caribbean vacation and might soon be taking up sailing as a hobby. The annual King's Cup was a perfect way to ease the family back into their everyday routines. Looking the part of a chic captain (if there is such a thing), Kate Middleton sported the same navy pants she wore to the opening of the regatta in May.

These high-waisted, wide-leg sailor pants are like a trendy version of the ones Popeye used to wear. They feature the classic white buttons on the front in true vintage style; it's clear that Middleton took the theme seriously when she got dressed for Thurs.'s activity.

Fresh off the island of Mustique, where they've been having a tropical vacation, she and Prince William made their UK comeback by competing in the King's Cup regatta, an annual sailboat race.

For the occasion, Middleton wore the exact pants she sported to the opening of the King's Cup in Greenwich just a few months ago. They fit the theme so impeccably that the duchess went ahead and wore them again.

Both times, she opted for stripes on top: first, a black-and-white striped sweater tucked into the waist and now, a more colorful knit top with a peplum hem.

She greeted the crowd at the Royal Yacht Squadron in the ribbed knit blouse by Orchard Mile. It features orange, navy, and taupe stripes and ruffles on the short sleeves and hem. She of course sported her sailor pants by L.K. Bennett (now sold out) on the bottom and, because it was a sporty event, her favorite Superga sneakers, too.

Later, for the race, Middleton changed into a pair of shorts, an official King's Cup polo, and a blue ballcap over her ponytail that Prince William wore as well. Her arrival look, however, was the highlight of the whole show.

Cop her look with a pair of nautical-themed pants of your own. A few options, ahead.

Pair these wide-leg trousers with a plain old striped top for the full Kate Middleton aesthetic.

These loose and flowy trousers feature bronze, anchor-engraved buttons along the pockets just like the duchess'. It looks like they may even be named after her, too.

Her Royal Highness would definitely approve of these sleek, nautical-themed bottoms.

These are basically your go-to black jeans with a trendy crop, a subtle flare, and Middleton-inspired sailor buttons.