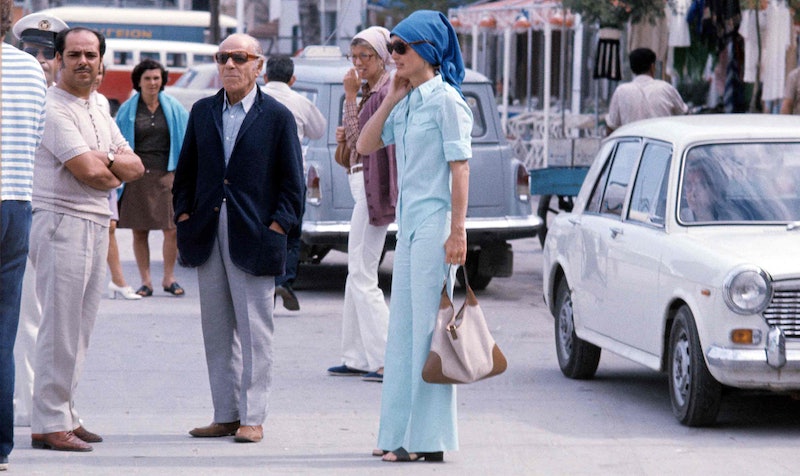 A useful approach to describing a fashion trend is relating it to decades past. Low-rise jeans? Early '00s. Grungy plaids? '90s. Power shoulders? Must be the '80s. It's a quick and effective tool for conveying the mood of a piece and encapsulates a range of factors like silhouette, color palette, and fabric. The '70s, specifically, is a decade that serves as inspiration to many modern designers. That period of time marked a major shift in music, art, culture, and of course, fashion. After 1967's iconic Summer of Love, the style icons of the 1970s carved a new summer aesthetic.

Paisley, tie-dye, exaggerated flares, crochet, and earth tones were the sorts of bold creative trends that even forty years later serve as defining inspiration from the time period. The usual suspects included women like Bianca Jagger, who was vacationing in the south of France with then-husband Mick Jagger. Jane Birkin, who was never seen absent of a summery ensemble (including her signature straw pail). Or, on the more classic side, women like Jackie O or Ali Macgraw, who homed in on the Americana vibe with their stripe prints and tailored linen separates.

For summer 2019, if you're heading on a holiday or simply want to create an inspired warm-weather vibe for yourself, it might prove useful to channel one of these '70s style icons. Start with the seven below to spark inspiration and if any call out to your wardrobe, shop the picks to mirror their aesthetic.

This American actress is well-known for her signature dark brows and raven locks. Her style evolved throughout the seventies with a wardrobe full of bohemian blouses, mini dresses, and tall leather boots. Her pared-down looks are especially inspiring and feel fitting for a weekend spent on a boat or at a candlelit dinner outdoors.

Jackie Kennedy Onassis's style took a relaxed, effortlessly cool turn once the '70s came around. She embraced pared-down separates styled with bohemian accessories, like oversized sunglasses and the scarf shown above.

Ross is well-known for her killer performance looks but there's something so simplistically cool and covetable about her tennis ensemble here it's worth replicating for your own summer sweat sessions.

Ah, oui. What '70s style icon roundup would be complete without Jane Birkin? The English actress' French-infused style (thanks in part to her long romance with Serge Gainsbourg) has become a major source of modern inspiration. White-on-white is an easy approach to trying out her style — just add a straw bag and flats.

This English supermodel and actress perfected the art of just-off-the-plane kind of style before the model-off-duty aesthetic became a thing to replicate. This white denim and Dr. Scholl's look is particularly iconic.

What better way to dance the night away this summer than in a Cleveland-approved ensemble by way of a crop top, wide-leg pants, and a cool belt? Boogie down like this model and NYC icon.