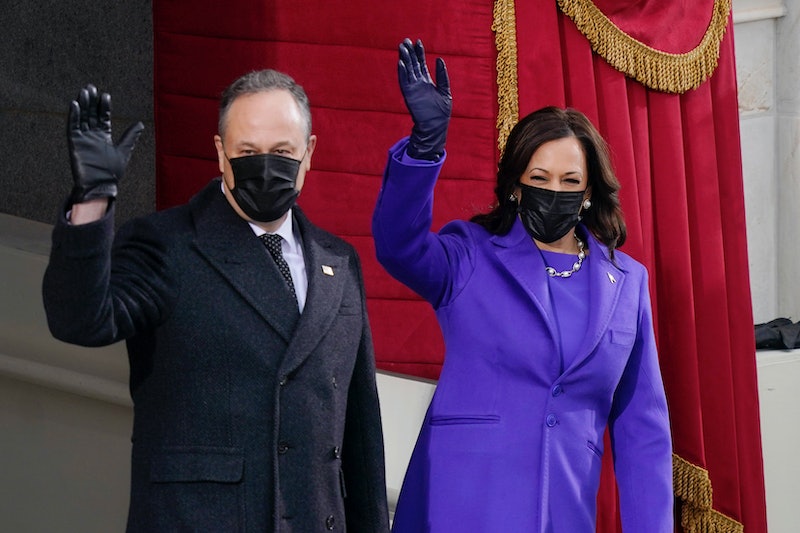 President Joe Biden and Vice President Kamala Harris' entries into the White House today signal a fresh beginning in 2021. Harris, especially, is making history as she is the first female VP, and the first Black and South Asian American woman to serve in this role. That said, on this special day, a sartorial commemoration was in order: Harris wore a purple Inauguration Day outfit featuring two Black American designers.

Christopher John Rogers — a recipient of the 2020 CFDA American Emerging Designer of the Year award — designed Harris' stunning coat and dress for the daytime activities. Later at night, Harris and her husband, Second Gentleman Doug Emhoff, attended the Celebrating America event at the Lincoln Memorial. For this occasion, Harris stepped out in a look from Sergio Hudson, who also created former First Lady Michelle Obama's jumpsuit for the daytime ceremony. The striking ensembles set the stage for Harris' future fashion choices as vice president, namely that she will champion Black designers and provide a crucial platform for emerging talent.

These historic looks came on the heels of another important outfit, from the evening prior. For Harris' appearance at the COVID-19 memorial ceremony at the Lincoln Memorial on Jan. 19, she called on a silhouette from another prominent Black-owned label: Pyer Moss. (The label is creatively led by Haitian-American designer Kerby Jean-Raymond, who won CFDA/Vogue's Fashion Fund in 2018.) The back of the beige coat featured a wave-shaped curve and a flurry of pleats, which added dimension to the all-black look.

Keep watch of Harris' fashion choices as she will continue to highlight emerging, diverse designers as vice president. These two outfits are just the start.