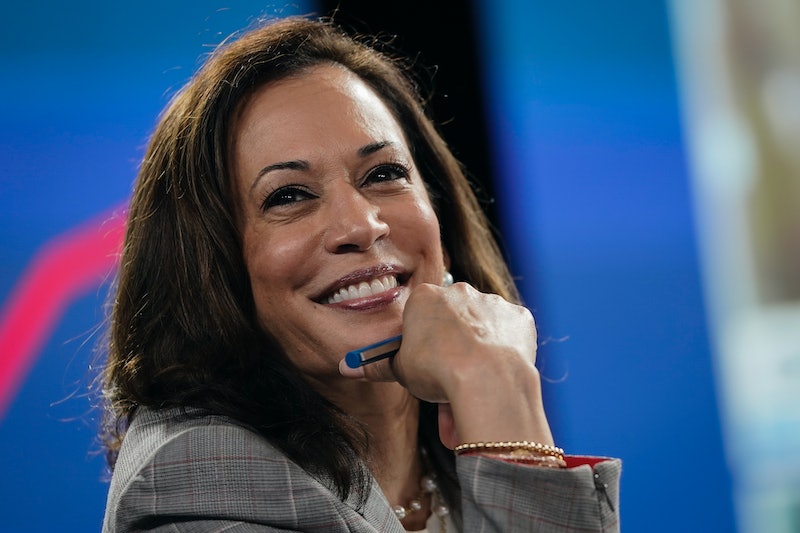 It's not often one sees politicians joking around and hanging out with their families on social media. Vice President-Elect Kamala Harris, however, gives her supporters glimpses into her private life thanks to niece Meena Harris' who often posts about her aunt on her social media accounts. (Meena's mother is Maya Harris, Kamala's younger sister.) Meena and her aunt are undoubtedly close, proving so when she shared a recent video of Harris wearing the future is female socks and a pink pantsuit set while at home together.

In the TikTok video, which Meena also shared on her Instagram, she can be heard in the background, saying, "Auntie, Auntie, I got you a gift. Impeachmints," while proceeding to hand Harris a mini jar filled with peach-colored candy (perhaps Mentos?). The pun was not lost by Harris, or the rest of her viewers, as she gave a laugh at the camera. Meena's video was posted in response to President Donald Trump getting impeached for a second time on Wednesday, Jan. 13.

Even though Harris was at home, the politician did not resort to loungewear like most people would. Instead, Harris wore a dusty pink blazer with matching trousers and on her feet were teal colored socks that, given the times, appropriately read "The Future Is Female." One only needs to recall the fact that Harris is not only the first woman to be a VP-elect, but also the first Black woman, and first South Asian woman, to be VP-elect as a reminder why "the future is female," mantra rings hopeful to onlookers everywhere.

The 2020 election cycle revealed that more women were elected to Congress than ever before — at least 129 women will join the United States House of Representatives and the Senate this year, breaking a 2017 record when 127 women served in Congress — and more women of color were also elected into Congress — that number is estimated to be at least 51. Read into these statistics what you will, but Harris' socks will remind everyone to keep positive and have hope that there will be more women in power, across all industries, in the future.

With Inauguration Day less than a week away, Harris' public appearances will be tracked by her legion of followers everywhere. And with that, her style too. There's already a host of websites dedicated to dissecting the VP-elect's wardrobe and one has to wait and see if Harris will want to make a distinct mark in the political fashion space as ladies like Michelle Obama has done. Keep watch and in the meantime, if you're inspired by Harris' outfit choices, order her exact socks, below. As mentioned on its website, a small portion of your purchase will go to national organization Parents, Families and Friends of Lesbians and Gays.