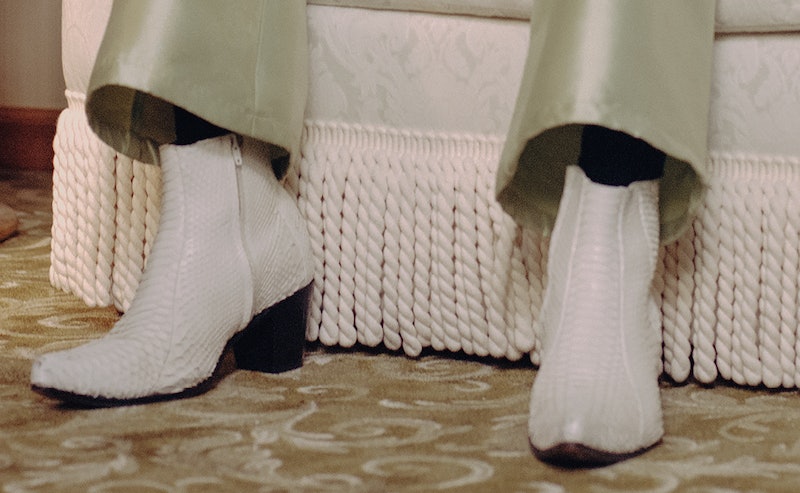 ICYMI: Aurora James is having quite the year. Somewhere in between founding the 15 Percent Pledge and covering the September issue of American Vogue, the footwear designer made time for an all-new collaboration. After first appearing on the runway (at Pyer Moss' historic Kings Theater show in Brooklyn), her creative partnership with Kerby Jean-Raymond, founder and creative director of Pyer Moss, is officially available to the masses. Their brainchild, Brother Vellies By Pyer Moss, is about more than just shoes, though: each pair immortalizes the immeasurable, yet oftentimes unseen contributions of Black women to the world of music.

On Saturday, Oct. 24 at noon ET, the drop arrives on both Pyer Moss and Brother Vellies' sites, with distinct men's and women's offerings running the gamut. There's heeled sandals, western booties, and knee-high silhouettes — many of which have 'PYER MOSS' stamped onto each shoe. While uncompromisingly chic, the collab highlights Jean-Raymond and James' shared point of view: that fashion is a catalyst for cultural conversation. As part of Pyer Moss' "American, Also" series, each design aims to illuminate elements of American culture that originated in the Black community. For Collection 3, which these shoes are part of, Jean-Raymond examined Black artists' contributions to rock 'n' roll in particular.

"Collection 3 was partly inspired by Sister Rosetta Tharpe and other Black women in music so honoring their contributions by collaborating with Brother Vellies felt like home," said Jean-Raymond in an official press release. “I am proud of what my friend Aurora and I created."

What you'll likely recognize straightaway is the abstract, multi-hued tall boots that Zendaya notably wore on the cover of InStyle earlier this year. Steeped in artwork by Richard Phillips, who depicted Tharpe’s contributions to the annals of rock music, these are taking a key, under-told narrative, and placing it on view in everyday life through footwear. Zendaya's boots are now available as well, a moment which fashion lovers have been readily awaiting for weeks.

To shop the Brother Vellies By Pyer Moss styles, continue ahead: