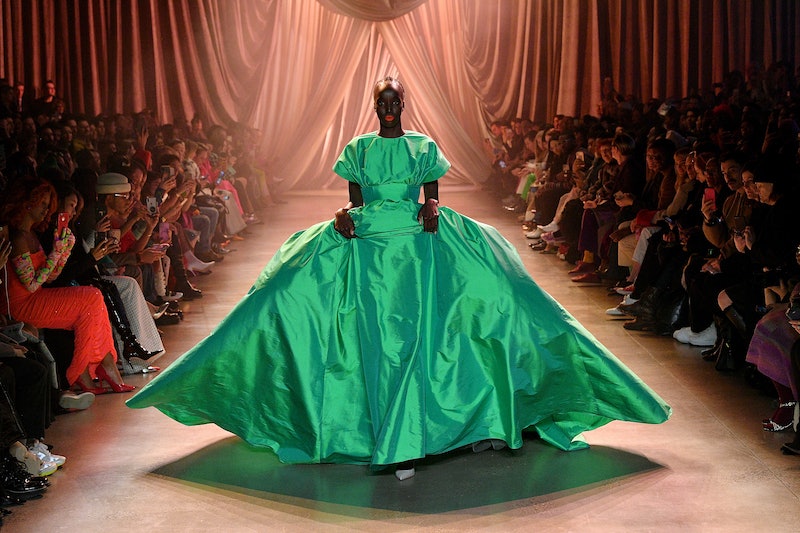 It can seem as though everything in fashion moves at a breakneck pace. Some brands or trends remain at the forefront for seasons, years. Some don’t. But Christopher John Rogers is a label with its eye on longevity and evokes a sense of joy — in its silhouettes, use of colors, even the designer’s own runway bow and twirl at Saturday's show — that makes it easy and inspiring to root for.

Even ahead of this weekend's runway show, Rogers’ name came to mind instantly when anyone was asked what they were looking forward to at New York Fashion Week (including Anna Wintour). Like other young, barely out-of-school designers that came before him and promptly changed the industry — think Alexander Wang or Jack McCollough and Lazaro Hernandez of Proenza Schouler, who debuted in the aughts — Rogers has gained a huge amount of attention in the relatively short amount of time he’s been in business. That includes winning the CFDA/Vogue Fashion Fund Award in November, along with a $400,000 prize that’s already made a monumental difference in his entire operation. But as the Baton Rouge-born, Brooklyn-based designer prepared for his Fall 2020 collection debut, he wasn’t simply dreaming up a steal-your-breath kind of runway moment (although he delivered on that, for sure). He simultaneously was in the midst of running his growing empire and preparing to finally see his designs on customers IRL as his spring 2020 collection hits Net-a-Porter today as part of the e-tailers Vanguard program.

“That was always the ultimate goal,’ says Rogers of his first shoppable collection that’s also been picked up by boutiques including Forty Five Ten and McMullen, “People to actually wear the clothes and have it not just be this online fantasy brand or thing that people couldn’t find in person.”

It’s hard not to think of fantasy first where Roger’s collection is concerned. At the SCAD ‘16 alum’s first NYFW runway show last September, the pieces included dramatically oversized dresses in iridescent silver and two-piece evening looks in powerfully bright colors that floated when they moved thanks to their puffed-up silhouettes. The line also has a dream lineups of fans, including Lizzo, Rihanna, Ashley Graham, and Michelle Obama.

“It’s reassuring to know that all of these diverse types of people can feel at home in the work,” he says. While the earliest Christopher John Rogers fans have fame in common, Rogers explains how each of their unique platforms has also reaffirmed his work. “I was always surrounded by a bunch of different types of people growing up...I’ve always tried to imbue that point of view in the work. And to know that it’s been effective and people find themselves in it, is very exciting.”

Next up, the world can see how a Christopher John Rogers suit speaks to a woman with a corporate job. Or someone with a special occasion to celebrate (one that doesn't include a televised red carpet). “Hopefully when it hits retail, all those different types of women and people also gravitate toward those clothes in real life and not just through a screen.”

However, if the screen is any indication, what customers love and expect from Rogers is the grandeur and unapologetic presence that comes with each of his designs — be it skirts that dominate the width of a runway or body-hugging strapless dresses in futuristic, metallic tones. “For such a long time, women and marginalized people,” Rogers says, specifically making a point to include queer people and people of color, “have felt like they’ve had to shrink themselves, speak up or show up in certain ways so as to not to offend or be overbearing, and I think we’re in a moment politically and socially where there’s no room for that anymore. There’s no time to be overly polite about your progressive points of view.”

This message of claiming space and owning ones convictions feels timely but it’s also personal for the designer who translates this idea into his clothing. “For a long time I would be in classrooms or the playground and I felt like I couldn’t fully express myself. I just want to give people the tools to be able to do that in so many different types of ways,” Rogers says, explaining that his vision is about being powerful but allowing for nuanced interpretations of what that power looks like. “I don’t think you have to be Lizzo in order to be confident. I think someone that is a bit more quiet and reserved can be just as self-confident and powerful in their presence.”

While Rogers has provided a much-needed burst of inspiration and energy in fashion — and specifically in a more pared-back season of New York Fashion Week — his mind is focused on the long-term, too. “I think about legacy a lot. Beyond silhouette or the fact that we like to use color, I want my legacy to be more about what we represent as a brand and the people that we champion,” he says. “I want to be here in 10, 20, 30 years and have a brand that lasts the test of time.”

Over the past year Rogers has been able to take some very practical steps toward the career he wants. Thanks to the money he's receiving from the CFDA/Vogue Fashion Fund award, the entrepreneur was able to stop his side hustle of freelance designing and turn all his focus to his own brand. He started working with pattern makers in the New York Garment District to improve the interior construction and fabrications for his Fall 2020 pieces. And, as of just a few weeks ago, his team moved operations to its first studio in Soho, allowing for Rogers’ Bushwick home to no longer serve as the brand’s office.

“Life is short and we’re privileged enough to work in an industry where we can work toward making things more sustainably, and human resources are part of that story," adds Roger about building his team and creating a work environment that can sustain itself as the brand heads toward a future as bright and abundant as he envisions. "Just making a place where we can be happy and feel supported and feel excited to come to work is really my biggest goal."

This article was originally published on 2.9.2020