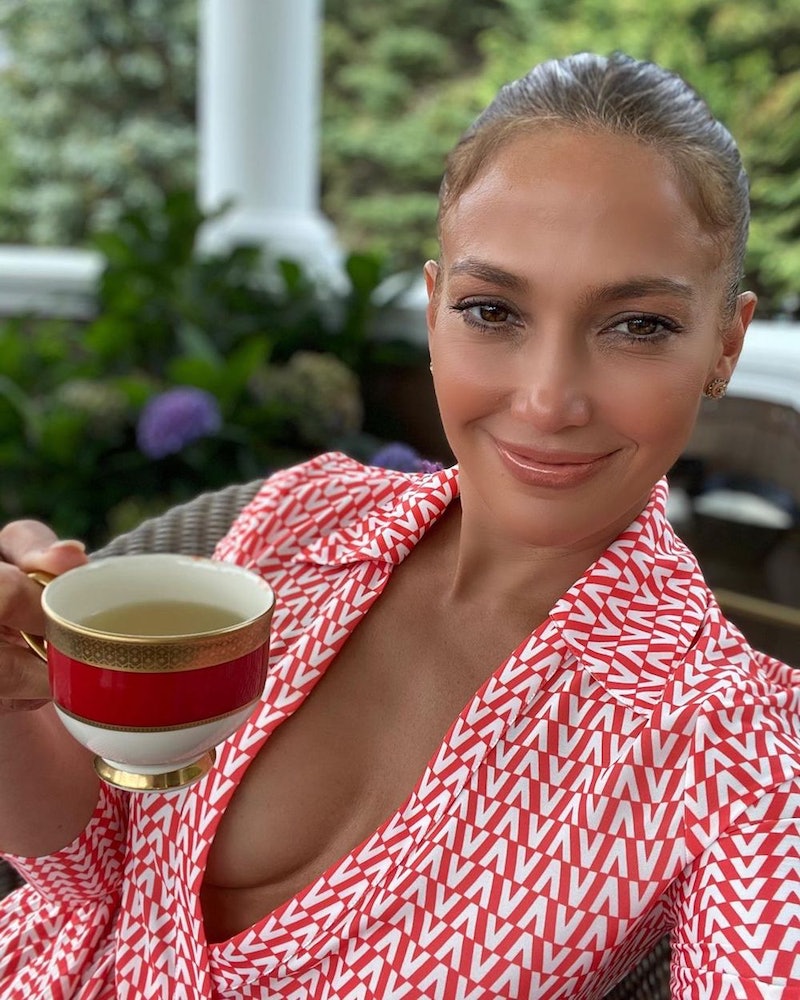 Leave it to Jennifer Lopez to look like a million bucks even when she's just staying home for the holidays. According to snaps on the star's Instagram, J.Lo's 2020 Thanksgiving Day outfit was every bit as glamorous as you'd expect for the woman whose recent American Music Awards look (including that memorable wet bob) is something fashion and beauty followers are still thinking about a week later.

Lopez, who spend the holiday with family — including fiancé Alex Rodriquez and his children — gave ultimate winter wonderland vibes in an all-white ensemble by Oscar de la Renta, according to a photo shared by her stylist, Rob Zangardi. "Tis the season." he caption the pic, which showed off the fashion icon's wide-legged ivory pants and embellished off-the-shoulder top as she posed in front of an equally glam and festive backdrop including a twinkling Christmas tree and white fur throw. Lopez finished off the picture perfect look with clear heels, bejeweled Chanel hoops, and her signature slicked-back-bun.

Taking a look through Rodriquez's Insta-stories, the multi-hyphenate stayed in her flowy white outfit through dinner (it seems she even color coordinated with the rest of the family), but things got a bit more casual after the meal when J.Lo slipped into something a bit more comfortable — and frankly, relatable — a cozy sweats set. Dancing with family in her tan cropped turtleneck and matching pants, she even treated fans to a preview new song, "In the Morning," which was released Friday.

But this wasn't the first time this season J.Lo has impressed fans with her holiday-themed attire. Earlier this month she attended the People's Choice Awards in a voluminous red Christian Siriano dress with matching lip and high ponytail — a look her hairstylist Chris Appleton referred to as "Xmas Barbie." Then it was her head-turning silver Balmain set that gave just the right amount of holiday cheer — without being too on-the-nose.

Given that Christmas is still a month away, there are probably a few more notable holiday outfits to look forward to, especially given that Lopez has both an upcoming beauty line and a new single to promote. At least one can hope so.