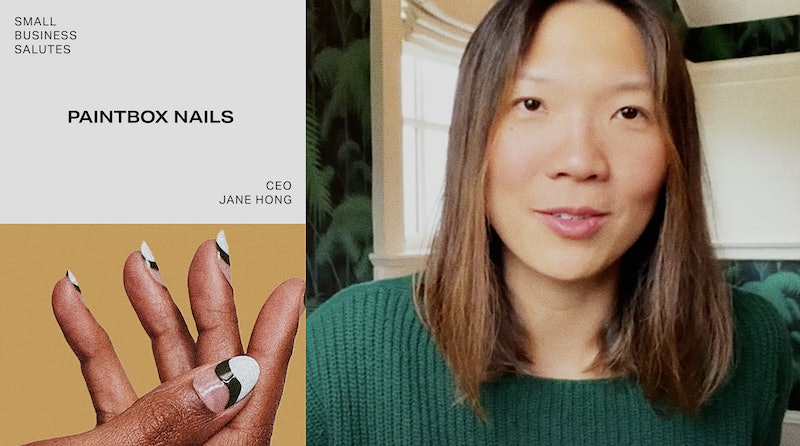 The stay-at-home era has put a heightened emphasis on self-care, leaving those who would normally get their fix from nail salons to tend to the tips of their fingers themselves. Instead of bringing nail maintenance to a halt, salon closures have done the opposite, compelling people to get even more creative with their nail art. In Bustle's latest installation of Small Business Salutes, the CEO of Paintbox Nails makes the case for DIY manicuring and explains what her New York City salon is doing to help clients (and employees) care for themselves while stuck at home.

Like every other salon in the city, Paintbox closed in mid-March for what it thought would be only a couple weeks. Now, after more than two months, the brand has pivoted its focus to e-commerce.

"It really impacted our business overnight," CEO Jane Hong said in the video. "We were fighting for survival, but survival means many different things."

Thankfully, the brand had its bespoke polish line to fall back on. In 2019, Paintbox Nails launched Power Couples, sets of match-made-in-heaven duos conducive to geometric experimentation. After its Soho and Uptown venues closed, the brand began offering its polishes (which also come in singles) at 20 percent off, with 20 percent of proceeds going to artists and coordinators who work in its salons.

The results from that campaign were so successful, Hong said, that the brand then committed 100 percent of proceeds to its employee pool. In the meantime, Paintbox was churning out Instagram nail art tutorials and trialing Virtual Mani Parties on Zoom, which are now available to book.

Hong said that during the team's trial Zoom party, employees found painting their nails to be "so self-soothing." "There's something to be said about art therapy and it definitely is... it's real."

Now through the end of May, Paintbox is donating 15 percent of its proceeds to victims of domestic violence via a new partnership with Safe Horizon. A few Power Couple duos to have on-hand for your next self-care manicure, ahead.

We are shining a spotlight on some of the millions of small businesses now challenged by COVID-19. This is part of an ongoing commitment our parent company, Bustle Digital Group, is making to support small businesses throughout the entire month of May. Tell us about your favorite small business on social media using #SmallBusinessSalutes.