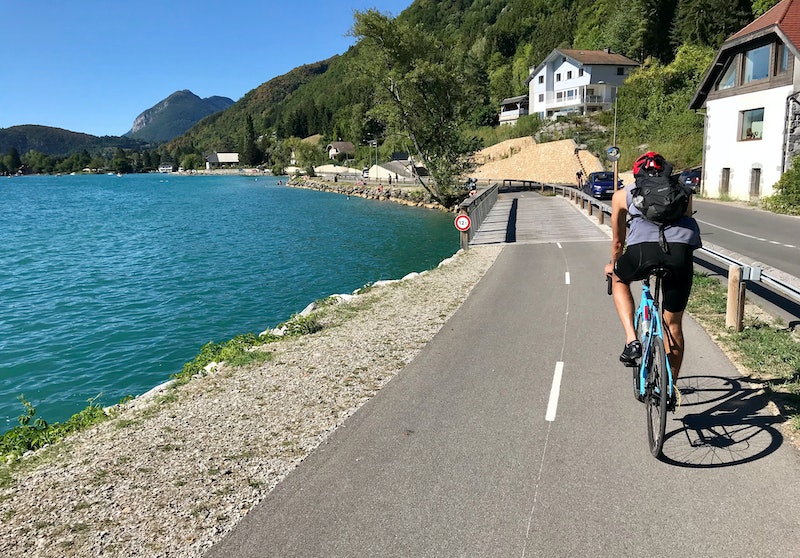 I am an outdoorsy person by nature. A skier, surfer, hiker — you name it, if it can be done outside, I’m generally game. So when a dear friend called and suggested we gather a group of women for a European bike trip with luxury outfitter Duvine, I was in — intimidated, but in. Duvine was named one of the world’s Best Tour Operators by Travel + Leisure, so I knew we were in good hands. The brand provides the bikes, experienced guides and plans the rides and meals in advance so you know what you’re getting into. They even send you a packing list and a jersey prior to the trip.

My friend chose the French island of Corsica for the destination because she heard it was beautiful — what she did not take into account was that it is also seriously mountainous. Rated a level three (out of four) in Duvine’s ranking system of biking difficulty, Corsica’s terrain is not for the beginner. The itinerary includes four days of biking. Generally, the rides are 25 to 40 miles a day, which wouldn’t have been too scary of a number if it weren’t for the aforementioned mountains.

I had been a mountain biker when I lived in Colorado years ago, but had never so much as been on a road bike. What I did know was that a road bike is very different from a mountain bike: It’s lighter with much thinner tires and you can go fast — like as fast as a car, which always scared me. I had about as much interest in falling off a road bike as I did falling out of a moving car, which is to say no interest at all. A road bike was a new machine to understand, a new skill to learn. There was no question, I would have to train.

I called my local bike shop, Helen’s Cycles, and asked if they knew anyone who would possibly “teach” me how to road bike. Since most of us learn how to bike as a child, the concept of being “taught” seemed a little ridiculous, but at the same time I knew there would be nuances of road biking I needed to know, gears to master, and a general understanding of the bike I would want before boarding the flight.

The employee they referred was the perfect coach for me, patient, nice and goal-focused. He knew I had a trip to get prepped for, and he promised me I would be ready. He never patronized me, but he made sure I understood what was different about a road bike from any biking I had done previously. We went on several Sunday rides leading up to my trip, with him coaching me through how to conserve my energy for big hills, how to embrace speed on the downhills (harder than you would imagine), and how to pedal efficiently — all things I would never have known without his guidance. On our final ride before my trip, he assured me I was prepared, and I felt pretty confident he was right.

Arriving in Corsica, we were immediately greeted by those very mountains I had worried about. Our two-hour drive across the island from the airport to our first hotel was on an absurdly narrow and windy road. Would we be biking these roads? Would we be dodging cars and wild drivers? Would we be going uphill for what seemed like forever? Spoiler alert: The answers are all yes, resulting in one of the most challenging physical experiences I’ve ever had. And one of the best.

We figured our first day would serve as a sort of intro day, with our two guides easing us into the experience. However, the weather wasn’t on board with our plan. Heavy winds made the ride a challenge from the first spin. At times the wind was so strong, we felt like it would blow us right over. Finally, we turned a corner that offered some protection and allowed us to get into the groove of the ride.

After approximately 17 miles, we arrived at a scenic lunch that allowed us to stretch our legs and indulge in a glass of rosé. Wine with lunch turned out to be a misguided decision because what followed the meal was several miles uphill in the late-afternoon sun along one of Corsica’s many windy, small roads. Not only did I have to focus on my pedaling and pacing, I also had to pay attention to the cars both coming and going. The result was an intense, exhausting experience. Day one was anything but an “intro” day — on the contrary, it showed us all that riding in Corsica was going to take skill, patience, and a tremendous amount of quad strength.

Day two started with a steep downhill down another windy road. However, thanks to my coach’s help, I found the twists and turns thrilling and was able to release the brakes and embrace some speed. After the downhill was six miles of a steady, incredibly scenic uphill. Corsica is full of mountains that literally fall into the piercing blue sea, so the difficult riding is often accompanied by vistas so beautiful they almost make you forget how hard you’re breathing. Post coffee, we had another 15 miles of rolling hills, which was super fun after the morning’s uphill. (This was the point where I realized my training had paid off.) After two full days on the bike, I was still feeling good and strong, and while the hills were challenging, they were also doable and ultimately rewarding.

Day three was the kicker. We were warned by our two guides that our uphill for the day was right at the beginning of the ride, several miles and very tough, with a grade of mostly eight percent (read: steep). Oh, and it was also a part of the Tour de France course in 2013. Several of our group hopped in the relief van almost from the get go, but three of us persevered.

As I pushed against my pedals, round and round and round, I tried to picture the delicious pasta and local rosé and I would reward myself with later (although a French island since 1768, Corsica maintains a lot of Italian culture). When I finally reached the top, I felt triumphant. I had achieved something I previously wouldn’t have thought possible. I knew I was in decent shape and could bike, but I didn’t know I could push myself past my limits, up several miles of a mountain with my legs aching and the sun beating down on me. I was starting to feel like I could conquer anything. And I was beginning to really love road biking.

And then there was our final day, day. Just as day one wasn’t an easy, intro day, day four wasn’t a breezy finale. When our guide told us the hardest climb of the trip was yet to come, I almost didn’t believe him. I thought he must be exaggerating. He was not. After a couple miles of flat road, we began to crawl up a long, curvy road that ended in a town we could see in the distance. Each turn I made only put into view another long, steep switchback. At one point our guide doubled back to encourage me up what he said was the hardest part of the ride, a 10-percent grade hill so steep I almost felt like I was going backwards. I dug in as hard as I could to make it to the top. I had been on this bike for four days: My legs hurt, my bum was sore, and I was tired of wearing spandex, and yet I made it up that grueling hill and the few remaining afterward and was ultimately greeted by a cheering guide at the top. Four days, some 125 miles, and more steep hills than I ever anticipated or thought I could conquer were behind me. I was truly proud of myself and already looking forward to planning another girls’ bike trip next summer.

I loved having the set goal of this trip to plan and work toward. It gave me purpose beyond my usual workouts, and it also gave me a good reason to take my studio-heavy workout routine outside. I’m not a runner, and a marathon is not on my bucket list, but I did begin to understand why people like doing them. Having a “finish line” in mind helped keep me stay focused and disciplined.

A several-day trip is not something you can go into blindly. My training was absolutely key to the success of my trip, especially as the days went on and the exhaustion set in. On the trip, it was clear who trained and who didn’t. While the relief vehicle was always an option, it wasn’t one I wanted to use after having traveled so far and training so hard. Setting a goal and then working toward it with serious, regular training rides was a large part of why I felt good on the trip and loved my experience.

It’s Never Too Late To Find A New Hobby

While I had previously been a mountain biker, I never had any real interest in road biking — that is, until I tried it. I truly enjoyed learning something new and finding myself challenged to learn the intricacies of a new sport. I also discovered a couple things I didn’t anticipate. For one, seeing a new destination from the seat of a bike gave me a completely unique perspective on the location and felt very different from other trips I’d been on.

Exerting energy all day while also exploring a new place makes for a special, incredibly memorable experience. Additionally, the hours spent on a bike allow you a lot of time to think and work through things in your head. By the end of the trip, I felt like I had been through several therapy sessions. Despite all the physical activity, I felt rested, rejuvenated and ready to go back to work and reality with a positive attitude and hopefully more defined calves.