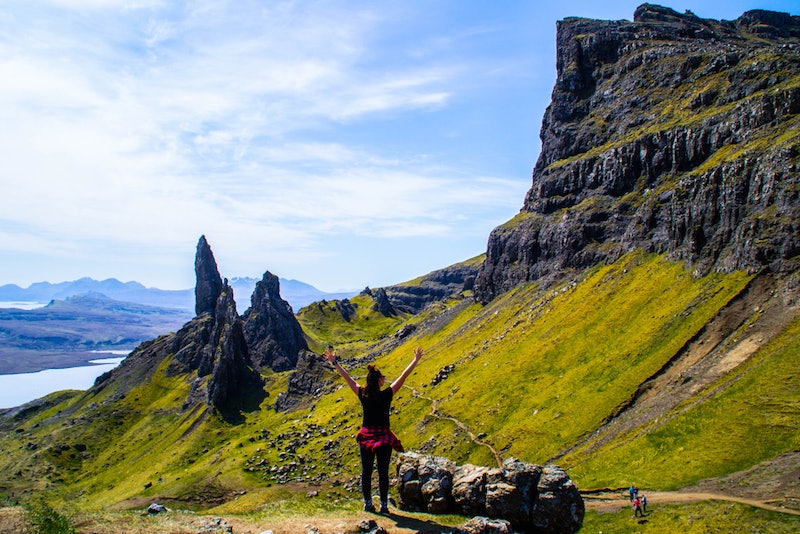 When it comes to dream getaways, everyone has their respective opinions on what makes an ideal locale. Some prefer exotic beaches and tropical settings while others opt for more majestic, mountainous or forest-filled backdrops. That said, some of the best bucket-list vacations don't make it onto one's said bucket list until after they've been experienced.

Yes, places like Paris, London, Rome, and New York City will always be popular hotspots for tourists around the world — and with good reason. These cities offer some of the finest views, shopping, museums, culture, and cuisine on the globe. But what about the rest of the planet? Yes, some of the brightest travel gems are often the ones that fly under the radar — just ask the individuals who've discovered this first-hand.

Ahead, The Zoe Report's editors reveal the game-changing vacations that will forever be etched in their memories. The locales are truly diverse, touching various parts of the world, including the good ol' USA. So if you're looking to add some stamps to your passport, this is a good place to start, whether you want to spend the weekend in Martha's Vineyard or go on an epic African safari. Just take a page from one of these books.

"My best friend's birthday also happens to fall right smack in the middle of Costa Rica's rainy season, but our stay at the Four Seasons was nothing short of magical. Not only was the staff incredible, but the resort had a ton of activities available (we surfed at sunset, jet-skied to a private island, and went on a hike to the hot springs) — and all of them were just as fun in the rain." — Lauren Caruso, Managing Editor

“A few years ago I had the chance to travel to Botswana and go on a safari in Chobe national park. The entire trip was a dream: waking up early every morning to ride through the bush searching for elephants, lions, giraffes, hyenas... you name it! It was truly the trip of a lifetime, the food was delicious and my group stayed in small cabins on a property called Savuti in the middle of the park. We ate our meals overlooking a watering hole where the wildlife came to bathe and drink. Though it's a haul to get there — I flew to Johannesburg, then to Botswana's capital Gaborone, then on a small plane into the Okavango delta — it was well worth it.” — Aemilia Madden, Senior Fashion Editor

"My family loves going to Martha’s Vineyard in the summer — it’s a rite of passage for many Black families on the east coast. Read about the rich history of the area, and I promise you’ll be sucked into the story of how it became populated with slaves and indentured servants who serviced white families in the 18th century, not to mention it's the summer locale of the Obama family. I actually spotted President Obama’s motorcade the last time I was there and ate at the restaurant where Sasha Obama worked. The island is special to so many generations, and I can’t wait to take my own family there one day." — Khalea Underwood, Beauty Editor

“I went in 2007 with a group of eight friends and it was one of the most fascinating, exhausting, and inspiring trips I've ever taken. We started by flying in to Lhasa where we explored the Potala Palace, where the Dalai Lama lived until 1959, enjoyed some of the local Yak-centric cuisine then headed out on a three-day guided tour across the country. We stayed in tiny villages along the way, meeting and staying with locals and visiting all manner of Tibetan temples, before arriving at the Northern base camp on Mount Everest. The landscape throughout the country looks almost Martian, and the rocky terrain makes it challenging to hike (compounded by the altitude of 17,000 feet), so we lazily took donkey-drawn carts onto the mountain. On our drive home, we stopped at dawn to watch the sun rise on Everest and it was breathtaking and surreal. I'll remember it forever.” — Nicky Deam, Contributing Style Director

"I visited my best friend in Albuquerque, New Mexico last year and haven’t been able to stop thinking about it since. As much as I love New York, a few days with some desert air, an incredible night sky, and green chile-heavy meals had me rethinking my home base. The true highlight of the trip (other than the aforementioned green chile, which is a must-try for any visitors) was hiking the Piedra Lisa Trail. I’ve never considered myself an outdoor person, but I’ll be the first to admit that the views were truly breathtaking." — Ruby Buddemeyer, Associate Celebrity Editor

“I’ll never forget traveling to Sa Tuna, a small fishing village located off the coast of Spain. There was no Wifi apart from a single cafe, and barely anyone spoke English. It was a more than welcomed change of pace, and the clear Mediterranean Sea was the perfect temperature (I’ll always remember that). Since Sa Tuna is a quick hour and a half north of Barcelona, I strongly recommend it to anyone planning a visit to Spain (or just looking for a proper escape).” — Aidan Macaluso, Social Media Editor

“My most memorable vacation so far was my honeymoon in Santorini, Greece. I know it's a cliché spot, but I've never been anywhere so beautiful in my life. I loved everything about it — how quiet it was, the beauty of the countryside, the ocean, and the cliffs all in one place, and how kind the people were. The best part of the trip was undoubtedly the boat ride we took on our last day. It was a sunset tour around a volcano and parts of the island, and we got to swim at every spot we stopped in and drink unlimited wine for hours before we sailed into the sunset with hundreds of other boats, right under the cliffs of Oia. Honestly, I get a little emotional every time I remember it.” — Anna Buckman, Shopping News Editor

“When I turned 30 I booked my first solo trip to Scotland and Ireland. I’m terrible at planning things, so I went with a tour company, Contiki, and ended up spending two weeks with a group of strangers. It was the most incredible experience of my life. And while Ireland was stunning, Scotland completely captivated me and is, to this day, my favorite country in the world. The people, the lush landscapes, the castles — there’s an Old World magic present in every city and town. I love the folklore and legends that are ingrained in the culture and people, from the mythical monster that haunts Loch Ness to the Fairy Pools on the Isle of Skye (which are said to gift whomever dips their face into them for seven seconds eternal youth). I’m planning a trip back this summer with my mother because I’m ready to relive it all!” — Angela Melero, Senior West Coast Editor