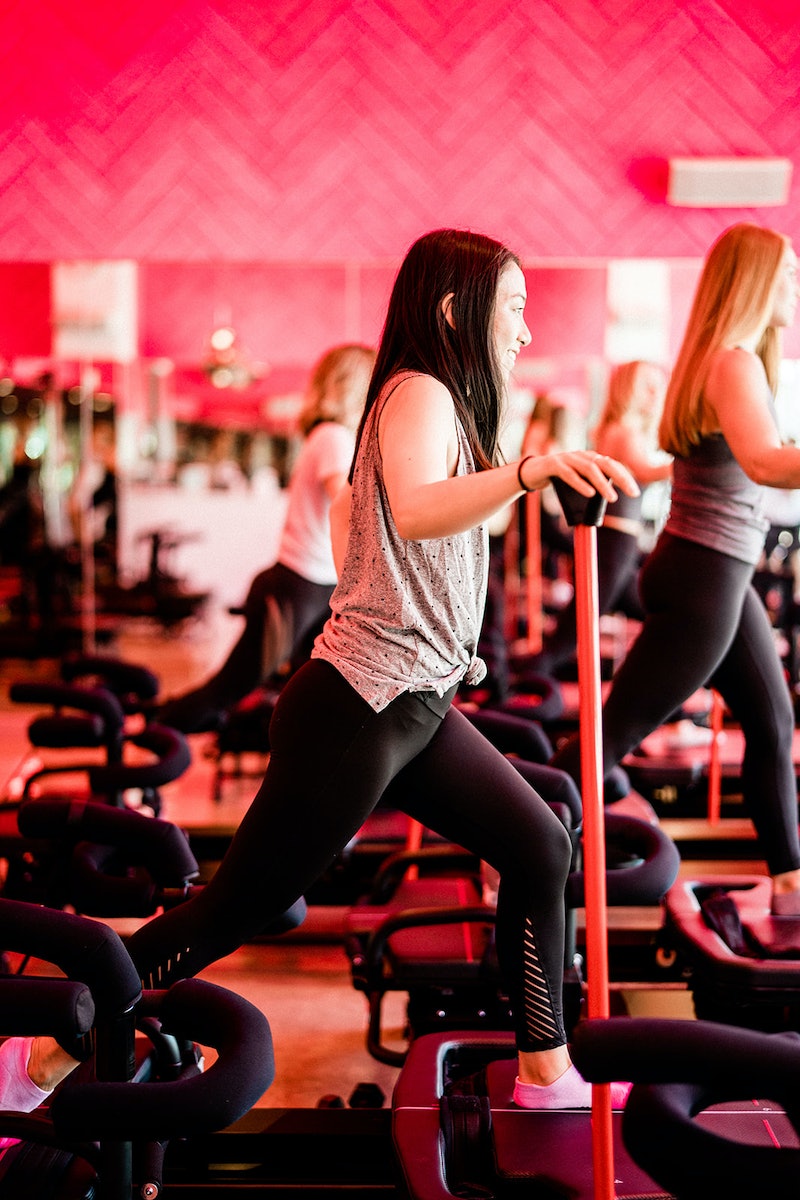 OK, full disclosure. My physical fitness levels have always left much to be desired. Never one for sports or athleticism growing up, it wasn’t until I hit college that I started caring about exercise, and even then I stuck to some fairly basic (yet effective) methods like outdoor running and the occasional yoga class. Lately, I’ve been trying to switch things up and dabbled in boxing, hot yoga, and some low-impact training, finding them all to be challenging on my body in different ways. That said, I don’t know that I’ve ever had a workout class that was so hard it pushed me to points of frustration. Until recently.

A friend of mine invited me to test out Lagree method-based fitness studio called (appropriately enough) The Studio (MDR). The local workout chain has been creating some buzz around Los Angeles, and I was curious to figure out the fuss with all about. Also, admittedly, I had never heard of the Lagree method and had no idea what exactly it entailed. All I knew of it was that it was supposed to transform your body by lengthening and leaning out the muscles and also serve as a solid anxiety and stress-reliever.

In researching The Studio on the internet and social channels, I immediately got Pilates vibes, because of the hero piece of equipment involved. Yes, similar to a Pilates reformer, Lagree workouts feature a Megaformer, which was designed by the founder and creator of the fitness program Sebastien Lagree. While a Megaformer and reformer both feature front and back platforms and gliding carriage, the similarities end there. Women’s Health described a Megaformer as, “a machine that's much larger than a classic reformer, with more straps, springs, and platforms [...] On a Megaformer, the carriage is spring-loaded with resistance that ranges from zero to about 250 pounds.” (Fun fact: Meghan Markle is said to be a fan of the Megaformer, so there’s that.) The attachments and functionality of the machine are essentially created to workout every part of your body, from your glutes and legs to your abs and shoulders — and, boy, do they.

Since I don’t have much experience with reformer-based Pilates, I’d never before really incorporated such heavy-duty machinery in my workouts. Before this experience, I liked keeping my workout routines fairly simple just relying on a pair of good running shoes, yoga mat, or boxing gloves. All the bells and whistles of the Megaformer intimidated me at first glance.

That said, The Studio’s aesthetic itself was far from intimidating. In walking into the neon pink establishment, I felt immediately comforted by the sunny and welcoming decor and staff. I was recommended a pair of non-slip tread socks to wear when using the Megaformer. Because I arrived right at the start of class, I didn’t get the chance to do a test run on the Megaformer and get a feel for it. (I always try to arrive 15 minutes before a class I've never tried before to get the full rundown, so that was my first mistake.) I managed to grab a minute with the instructor, Olivia Chaniewski, who told me to be easy on myself, as the class and method was a tough one. She was not kidding. From the get out, this class challenged me in more ways than one.

Here’s a complete rundown of my experience as well as expert tips on how to power through one of the toughest (and most rewarding) workouts I’ve ever taken.

So for reference, my first class at The Studio was the Total Body, which is described on the website as the “most popular, class creating a strenuous, complete total-body workout.” Strenuous, indeed. In retrospect (and after speaking to Lisa Hirsch-Solomon, founder and CEO of The Studio (MDR)), I should have started with one of the preliminary courses that went through all the movements at a slower pace. Instead, I rushed myself into a 50-minute whirlwind of challenging muscle-toning and building movements to the beat of the lively energizing tunes filling the studio.

“[Lagree method] pulls from strength training,” explains Hirsch-Solomon to The Zoe Report of the program. “You definitely get elements of yoga in there. People do say it pulls from Pilates, high-intensity training, and cardio. The great thing about it is that it leans and lengthens you because you’re moving at a steady four-count. That’s where the shape comes in and what causes you to change.” The fitness cocktail is also what can make it so tough for first-timers, explains the CEO. “It's definitely an intense workout," says Hirsch-Solomon. "You kind of have to get past the first five classes before you stop feeling like a fish out of water."

A garden variety of new movements were introduced to me via the shifting and sliding structure under me. The catfish, which required me to push and pull the back platform of the Megaformer with my legs while on my toes. There were also bungee kicks, which involved me kicking my legs back with a resistance band while on all fours (I loved those). Then came the toughies: teasers. Leaning against the top front bars with my body angled so my feet were overlapped side-by-side, I had to shift the platform back and forth using my legs and core. Yes, it’s as hard as it looks.

My body and mind was so used to my go-to rolodex of yoga and basic cardio classes, that this new stimulation was throwing me off physically and mentally. As someone who likes to excel and get things right the first time, not being able to wrap my head around a simple piece of machinery frustrated me a bit.

That’s not to say I didn’t get plenty of support from Chaniewski. Knowing my novice status, she was incredibly doting and often swung by station to adjust my posture or simply place me in position. My jumbled, frazzled mind made it even more difficult to take and understand direction. Some of the body movements require you to be in various pretzel-like stances, and I had a hard time fully comprehending where to place my legs and arms at certain points. I was literally my own worst enemy here.

"You're gonna feel like a fish out of water for the first five to 10 times," says Hirsch-Solomon. "We hopefully make the client feel safe enough to stop when they need to for a water break or to go to the bathroom and not feel like they're beating themselves up."

I’m happy to report that after about 30 minutes, the Megaformer and I finally reached some sort of neutral ground. I began to feel more comfortable with the equipment and let go of the idea that I was going to be a Lagree pro the first time around. Chaniewski offered modifications for every movement and I embraced each one. My goal was to just complete the class on a strong note and not give up. And I did.

I admit that, at certain moments, introducing a challenging new workout can be hard on the body and mind. However, that frustration that I felt at certain points lit a fire in me. It made me want to come back and improve. It turns out the class was a blessing overall, as it forced me out of a comfy fitness rut I’d been in for about a year or so. I always walked away with a renewed energy I hadn't felt in a while.

According to Hirsch-Solomon, this fire in me will never truly go out, as the Lagree method is designed to continuously challenge and transform the body. “The routines are constantly changing and evolving, so your body never acclimates to this exercise regimen," says Hirsch-Solomon. "Everyday is a new so you don't get stagnant. It never gets easier, you just get stronger."

Based on this first experience and my post-class conversation with Hirsch-Solomon, I’ve picked up a few key tips for those looking to take on the Lagree method for themselves.