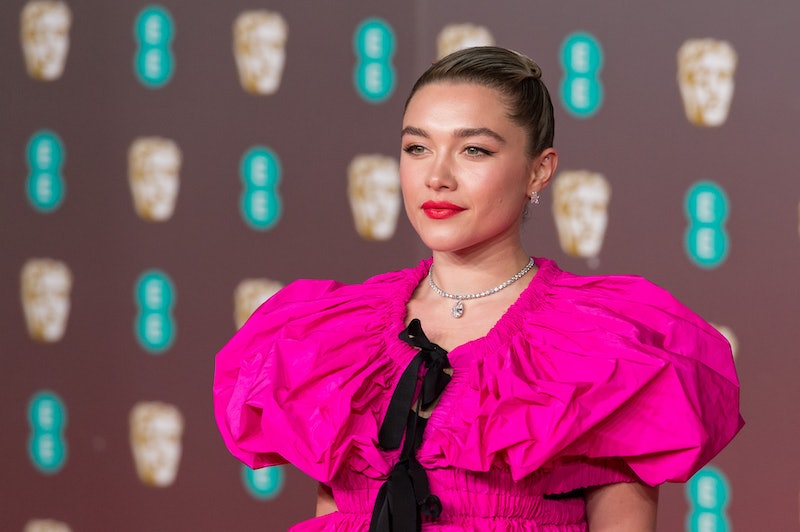 Florence Pugh is 2020's it-girl in every way. So far this year, she's been nominated for an Oscar, graced the cover of Vogue, and turned up to every red carpet with the most talked-about outfits and the fanciest updos of all. Case in point: The mini masterpiece that was Florence Pugh's 2020 BAFTAs hair.

All eyes have been on the 24-year-old this awards season. She seems to be getting braver and more extravagant with each and every outing and her look at Sun.'s 73rd annual British Academy Film Awards followed suit. Pugh's debut of Dries Van Noten's over-the-top, hot-pink dress was one the most buzz-worthy ensembles of the night. Her hair was a popular topic of conversation, too.

From the front, it looked just like one of those combed-over, slicked-back buns she's been perpetually sporting, but the back of it proved there was so much more to it than that. Starting at the base of Pugh's neck to her crown, hairstylist Peter Lux had created one masterful infinity twist, wrapped in black grosgrain ribbon like a present on Christmas morning.

The complexity of the updo was almost kept a secret until Lux posted an up-close photo of it on Instagram later in the evening.

Pugh is quickly becoming the queen of creative hairstyles, thanks to Lux, whose client roster also includes Michelle Williams and Reese Witherspoon. She's almost singlehandedly responsible for making the emerging red-carpet bun a thing, having worn a whole range of them lately (braided, twisted, bejeweled, and you name it). Even the updos she wore in Little Women have taken on a life of their own.

The highlight of Pugh's pretty hairstyles is always the accessories (so very 2020). There's typically some sort of ribbon, chic tie-back, or delicate jewelry involved. Although her BAFTAs twist looks to be wildly tricky, you could at least channel your inner Pugh by adding a simple ribbon to your next updo.

Put that leftover holiday trimming to good use: in a braid, a twist, or to secure a simple ponytail. You can bet there will be a lot more of this darling trend to come.